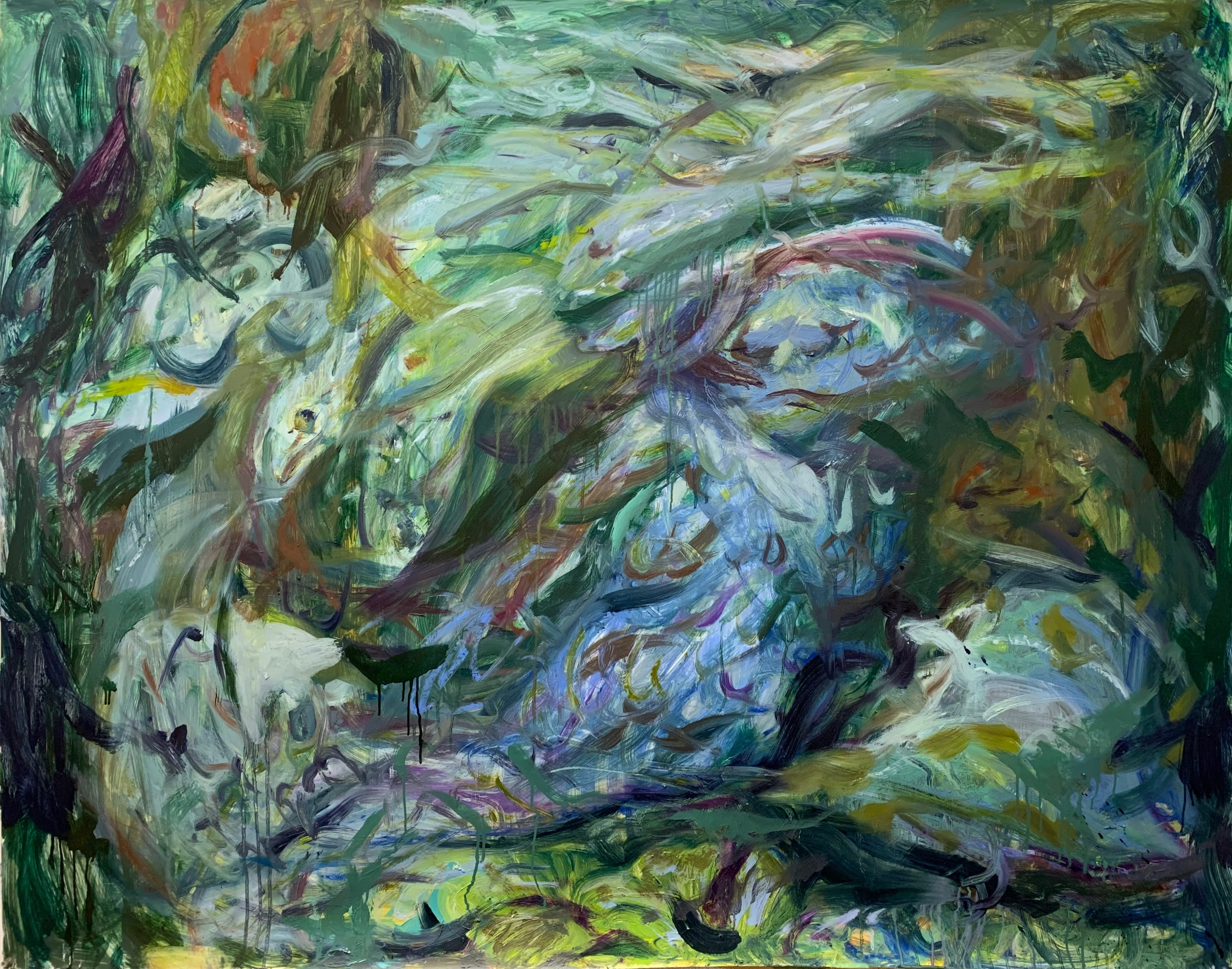 Lauren Powell Projects ✨
5225 Hollywood Boulevard Los Angeles CA 90027
Apr 29, 5 PM - 9 PM — ends Jun 05, 2022
Opening Friday, April 29th at 5PM, Lauren Powell Projects is thrilled to present the third exhibition at the gallery, Water Bearers, a solo exhibition by Brooklyn born and based Whit Harris. This is Whit’s first solo show since obtaining her MFA from Hunter College, New York, NY in 2021, and first time showing in Los Angeles. Water Bearers will include a series of five new oil paintings, the works on paper that informed them, and a site specific installation that transports the viewer into a sublime space of gestural mark making. The space engulfs both the audience and the artwork in an oceanic carrier for the imagination. Informed by the artist’s love for ancient cosmology, astrological symbolism and the water, she depicts philosophical parables of her lived experiences as a Black woman combining her awareness and skill with narratives and symbols from the past.

“I’m attracted to the multifaceted symbolism present in mermaid imagery. The way that the conscious and subconscious bodies are represented as human and cetacean forms respectively demonstrates this enduring need for people to visualize an embodied spiritual presence in the deepest sense. It’s sensuousness and grace while swimming in murky water represents a type of psychological viscera. It’s form is both familiar and alien, enticing and menacing, and they are mythologized to have the seductive song of its narrative predecessor the sirens. While historically mermaids have been this sexualized figure, one that is desired but unattainable for different reasons, I think of that more as a projection by people trying to control someone that they are both attracted to and intimidated by, which is something I relate to as a sex worker. There’s a queerness to this erotic elusiveness and dimensionality, to being projected onto, being unattainable, and being mythologized. The supernatural being arises out of myth, and the otherwise stable identities of those who are in the presence of supernatural beings or conditions are disrupted, sometimes to the point of irrationality and violence. I think of the myths they create for white folks about Black people – that we are somehow both animals and superhuman, undesirable and irresistible. They tell these myths about trans and non binary people too. It’s a positioning that I think a lot of people who are oppressed under white supremacist cis-hetero patriarchy can relate to.” - Whit Harris

Whit Harris (b. 1985, Brooklyn, NY) composes surreal figurative drawings, paintings, and sculptures in a monochromatic or limited color palette. Her recent exhibitions include We Were Never Gone at Hauser & Wirth in New York, and Flesh and Time and Bread and Friends at Galerie Christine Mayer in Munich. Whit attended the Artist in Residence at Center for Contemporary Printmaking in Norwalk, Connecticut in 2019, and will be participating in a clay residency at Artshack Brooklyn in summer 2022. Whit completed her MFA at Hunter College and BA at Stony Brook University. She lives and works in Brooklyn, New York.
Tweet
Share