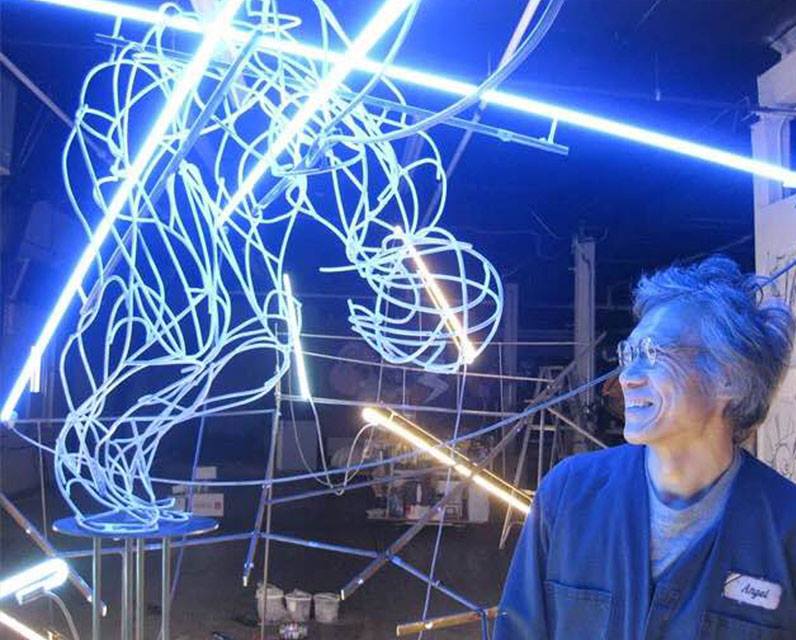 
Ahn’s work “comes out automatically” as he sifts through his sketches for nebulous forms and metaphors. While the processes that govern our household appliances, algorithms, and psyches may also be ‘automatic,’ Ahn sidesteps the term’s rotely mechanical or psychoanalytic associations. Instead, his approach echoes an ancient iteration of the word, the Greek automatos, wherein a form can “act of itself” or “of one’s own will.” This dynamism, or even animism, transfers a yearning for selfhood into the already glowing, moving works.


While the exhibition exudes the industrial immediacy of American and Korean cities where Ahn has lived and worked, hints of natural phenomena such as vine-like armatures or stacks of river rocks reflect not just a system but an ecosystem. Ahn’s ideographical hearts, sprawling figures, and visceral collages present an inward counterbalance to his exterior reactions, rather than diametrically opposed conditions. Ahn lightheartedly describes himself as being halfway to a monk while ruminating about the overwhelming intensity of our habitats, human-made or otherwise. By embracing the most spontaneous and automatic force of all, nature itself, Ahn incites his works to germinate, toil, and coalesce, as if of their own will.