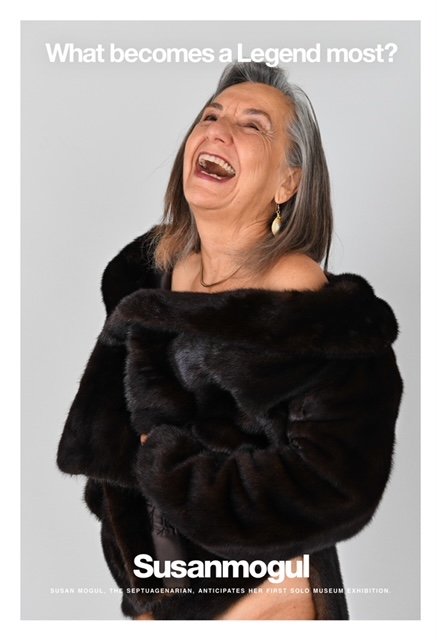 At least since the nineteen sixties when Norman Mailer titled his book of collected essays, Advertisements for Myself, writers and artists have acknowledged “self-promotion” as a central part of the artist’s job and perhaps even, of the artwork itself. Few, however, did so earlier or with greater gusto than Mogul. This cheeky attitude weaves in and out of Tales from the Mogul Archive, her 36-panel magnum opus which fills the gallery’s main space. Self-promotion plays an even greater role in What becomes a Legend most?, Mogul’s series of three strikingly beautiful semi-nude self-portraits with captions in three languages—Polish, Spanish, and English—on view in the entry gallery. These latter artworks are based on the mid-century ad campaign for “Blackglama,” that featured glamorous images of older women celebrities wrapped in the company’s mink coats, a campaign which is today best remembered for its hauntingly poetic tag line, “What becomes a Legend most?” Mogul poses this question at the top of photographs of herself, and then proceeds to answer it at the bottom with a characteristic mix of self-aggrandizement and self-mockery: “Susan Mogul, the septuagenarian, anticipates her first solo museum exhibition.” As do we. And eagerly so. “Susan Mogul: Sneak Peek,” promises to provide the perfect send-off for this highly accomplished if not yet sufficiently appreciated artist.
Tweet
Share