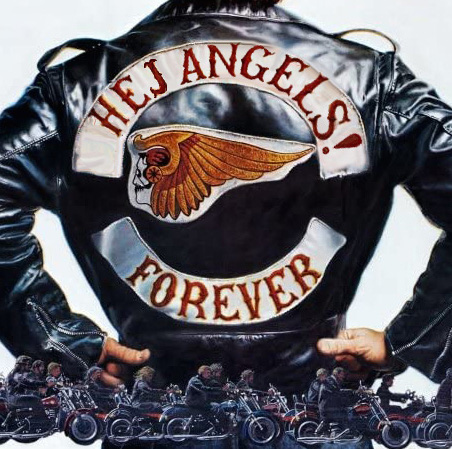 
Elephant Art Space is pleased to present Hej Angels! Forever by New York based artist Isabel Theselius. For this exhibition Theselius has created an oversized faux leather vest, with detailed embroidered patches and enlarged pins. This piece has been meticulously copied from a motorcycle vest that belonged to Theselius deceased stepfather, Swedish artist Anders Bom Lindén, who passed away from pancreatic cancer in 2012.

Anders Bom Lindén graduated from Malmö Art Academy in 1998 and was active as an artist until his death. He made work from his own experiences, reflecting on themes such as loneliness, desire, and expressions of outsider-ness as well as freedom, using a variety of mediums.

From the time Theselius was an art student, until today, she has been greatly influenced and inspired by Lindéns mode of working and living, blurring the boundaries between art and life, reality and fantasy. Bom was both a friend, colleague and father figure for Theselius.

The act of copying his motorcycle vest is an attempt to capture some of his spirit. The oversized vest is accompanied and back lit by a red neon sign spelling out the phrase ”Hej Angels!” (”Hey Angels!”), a slip of the tongue that Lindén used when referring to the motorcycle club Hells Angels. This neon sign stems from a larger ongoing tribute-project about Theselius’s stepfather first exhibited at Room Gallery in Irvine in 2014. In that iteration of the project Theselius had airbrushed her stepfather's house in the Swedish countryside onto her car to be exhibited and then driven around Los Angeles, a city he always wanted to visit but was never able to.

A third piece, consisting of a female torso lighter that used to belong to Lindén, is displayed on a small shelf attached to the wall. The lighter has a perpetually lit flame.