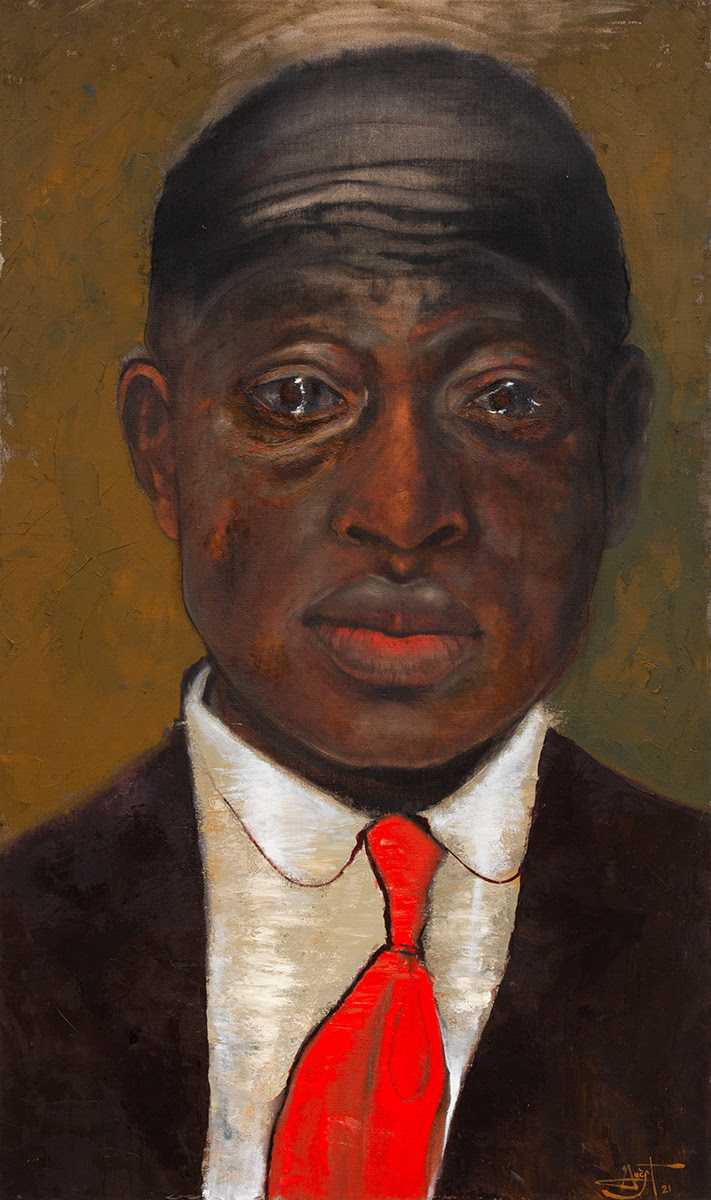 Chaz Guest’s paintings put forth a powerful form of contemporary history painting, alive with urgency and emotive complexity. By championing untold stories in his art, Guest strives to reclaim concealed histories and narratives within African American culture. Visual memoirs unfold with a bold eloquence and dynamism, speaking to the universal impulse to persist in the face of struggle. Each of Guest’s paintings are infused with a palpable sense of conviction that celebrates resilience, identity, and our shared humanity.

Gaining Pride with Promises Broken centers around the home life of Black American families in the period immediately after World War II. In the 1940s, men were incentivized to join the war effort with the financial security that would be provided by the G.I. Bill upon their return. However, Black veterans largely came back to the same economic conditions, as the discriminatory practice of redlining all but barred them from buying houses. Portrayed in the intimate quietude of the domestic space, Guest’s subjects exude pride in spite of systemic failure, their dignity uncompromised by their government’s false guarantee.

The figures that populate Guest’s paintings are partially fictionalized, acting as homages to his family members who have served in the armed forces. However, rather than “real” individuals, Guest considers these subjects allegories for a culture that has long been misrepresented and belied by the rhetoric of social progress. In this capacity, Guest connects the spiritual resolve of his subjects with his artistic drive to honor their stories. The resulting tableaux are creative accounts of lived experiences, equally as complex as the people depicted.

Each composition begins with an underpainting in Japanese Sumi ink which is then layered with oil paint. At once improvisational and technically rigorous, this self-taught style has become Guest’s signature. The immediacy of the calligraphic lines coalesce with fluid strokes in Prussian blue, the unique pigment offering the artist an aesthetic throughline through history and his own body of work. Inspired by the later works of Akira Kurosawa, Guest maintains a distinctive palette that allows for color to become metaphor. Prussian blue alludes to unrealized promises of change, as the artist continues to seek beauty in the folds of oppression.
__

Night Gallery is pleased to present The Find, a solo show of new paintings by the Nashville-based artist Jodi Hays. This is the artist's first exhibition with the gallery and in Los Angeles.

Jodi Hays’ work is located within the history of abstraction, but she came to it through figuration and the genre of landscape. Having grown up in “The South,” its geography, the complicated condition of living on and off of the land, screen doors, old boards and sign painting, textiles, and wallpaper has informed both the interiors and exteriors and boundaries in her work.

Hays’ interest is in rural culture and handiwork, and their associations with the body. In utilizing found materials, Hays’ collage-based painting becomes a solution for how these syntaxes and moves (squeegeeing paint, spraying, sewing, stenciling) can unify, forming a new or familiar but slant language.

In Hays’ words: “There is something improvisational in using materials that one finds in the periphery of a tradition, a convention, a history or a market. I also find the humility of materials deeply personal, and therefore political. Mining a ‘southern povera,’ my main habit in iconography is the grid that I ‘find’ in reclaimed textiles, fabric, and cardboard. These materials serve as stand-ins for the resourceful labor of women. I ask myself what it can mean to care for and remain attentive in life and in painting (and if these are the same thing), revealing how my core iconography elucidates a conversation on abstraction and a generative (familial, abundant) mark that is inexhaustible—like a mother.”

The grid provides an important tool and vehicle for abstraction throughout Hays’ practice, and language serves as a generative source as she consistently turns to the works of the late Arkansan poet C.D. Wright. Wright (who is most likely a distant cousin to Hays, also from the foothills of the Ozarks) wrote: “I’m fairly aware of the contractions in my work and personality. I’m country but sophisticated. I’m particular and concrete … but I’m probing another plane. There are many times when I want to hammer the head. Other times I want to sleep with the hammer.”

Hays’ work is research-based and titles have double meanings. They include formal considerations of materiality in high and low culture as well as modes of feminist making. Her paintings stem from her curiosity about the lines that separate what is protected from, what is feared, and how gendering plays into these expectations. Resourceful labor of women has traditionally included: finding, stacking, making, mending, wiping, affixing, sewing, lifting, rolling, patting, piecing, spreading, smoothing, feeding, pushing, covering and recovering. These acts
are made visual in her work.

Night Gallery is pleased to announce And Now at Night, an exhibition of new work by David Flaugher, Phillip John Velasco Gabriel, Kathryn Kerr, Leslie Martinez, Eli Ping, Michelle Rawlings, and Coco Young, presented in collaboration with AND NOW of Dallas, TX. Organized by AND NOW owner James Cope, And Now at Night showcases paintings and sculpture from a close-knit group of artists who have helped to shape his gallery’s program over the course of a decade. Collectively, these works take interest in diverse—and sometimes divergent—modes of perception through considerations of memory, nostalgia, and materiality.

David Flaugher’s practice focuses on emptiness as a subject. Here, he has painted a nocturnal still life from memory, effectively reverse engineering arcane approaches to artistic production. In his paintings, Phillip John Velasco Gabriel isolates imagery as vignettes. Brief moments are frozen in time like flashes of a dream; in this exhibition, an iconographic snake is contained within an otherwise abstract canvas.

The memoir-esque paintings of Kathryn Kerr are living archives, acting as a space for the artist to map and memorialize events, dreams, recollections, and past meetings. Michelle Rawlings’ work speaks to our ability to live vicariously through images, often reinterpreting fashion photography as coming-of-age narratives devoid of irony. For And Now at Night, Rawlings presents a portrait taken after a 1988 Vogue Italia editorial; a couture-clad model is rendered by the artist in a classical style.

Elsewhere, Somewhere in Central Park by Coco Young draws inspiration from Edvard Munch’s The Kiss. Young’s painting depicts two bodies that may be merging together or consuming one another —ambiguity notwithstanding, the romance of the tableau is palpable.

Leslie Martinez creates abstract paintings that trace their lifelong interest in boundary permeation, and the dualities and negations present between queerness and borders. Themes of self-determination, embodiment, and obfuscation are channeled through visual and haptic references, resulting in paintings that are vividly sculptural.

Eli Ping’s work is born of an obsessive exploration of material and gesture. Each sculpture meticulously strives to remove the artist's hand, leaving the viewer with a memorial to reduction. This exhibition includes a work from his Mote series, which are made by pouring resin over a canvas hung from the ceiling, capturing the subtle physical sensation of vertical motion.

Having admired AND NOW’s acumen for installations and daring programing from afar, Night Gallery is thrilled to host And Now at Night.