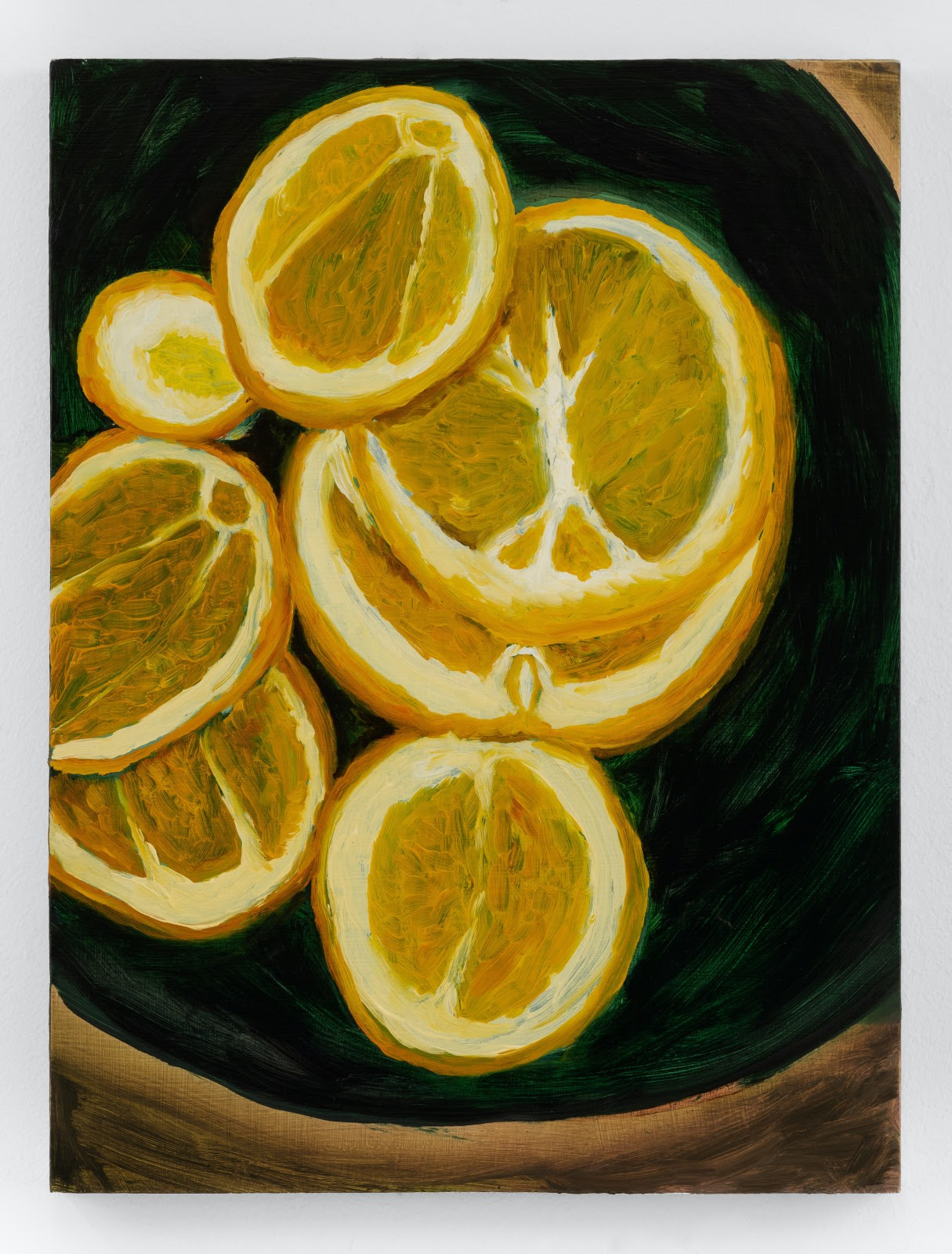 Make Room
5119 Melrose Ave, Los Angeles, CA 90038
Jul 02, 4 PM - 7 PM — ends Jul 16, 2022
Those Lazy, Hazy, Crazy Days Of Summer is inspired by Nat King Cole’s song of the same name, a well-loved piece released in 1963. In a similar vein, Make Room presents a selection of works that touch upon the themes of summer, such as seasonal heat, the mark it leaves, and all the associated bodily sensations.

Astra Huimeng Wang’s work Look At You Now Look At Me reflects her latest exploration with flock painting, a technique that she has carefully developed and honed over a series of years to generate her intricately detailed, highly textural works of art. This new work conjures up a wealth of sensations associated with one’s dreamlike memory of warmth and mystery. The velvety texture resulting from the layering of flock pigments works to construct an abstracted scene of nearly cartoonish human figures crowding together shoulder to shoulder. The faces of the individual figures appear to melt into one another, as well as to meld into a veritable sea of color and shadow. A frog sculpture is situated on the edge of the picture plane as the observer of it all. Wang’s work reflects both the influence of dark humor and the archaeological finds, fossil displays, narrative motifs, and Ordos bronze plaques at the Inner Mongolian Museum she frequented growing up.

Through painting, Los Angeles-based artist Carrie Cook seeks to reveal the moments of mystery and intrigue found in everyday life. Many of her paintings explore the notion of her search for reprieve from the “glaring brightness, (and or) over exposure that LA can cause one to feel.” Her work blurs the lines between the abstract and the representational, while playing with different pictorial perspectives. This idea of mystery, as well as this notion of employing both an abstract and representational visual vocabulary to play with perspectives can be seen in both Oranges Sliced and Night Swimmer. Both the closely-cropped Night Swimmer and Oranges Sliced depict intimate, nocturnal scenes that evoke the idea of cool refreshment. In Marigolds and Smoke, Cook juxtaposes the vibrant orange-gold bouquet of marigolds against a smog-filled sky and the smoky California landscape, capturing a moment of ambiguous beauty imbued with grief due to climate change. The flowing petals of the marigolds themselves recall the fires that plague drought-affected Southern California, while also referencing the symbolic significance of marigolds in the Mexican/Latinx celebration of Dia de Los Muertos (Day of the Dead) that conceptually link the image of the flowers to idea of death. Cook explains the inspiration behind this work as being a sunset in the backyard of her house in Los Angeles, in which the “smog…suggestive of the precarity of our location…also has this lingering romantic softness that is so seductive you don’t want that moment of light to end.”

Los Angeles-based artist Jessica Taylor Bellamy’s aesthetic practice is concerned with investigating the precarious and ever-changing ecology of California in the wake of climate change through the critical yet loving lens of eco-phenomenology. Through her painting, Bellamy prompts us to redefine our relationships to the natural world and to analyze the societal structures and systems that strain the environment, and to critically examine socio-political and ecological results of the fraudulent idea of paradise inherent to the California natural landscape. Bellamy depicts the natural world, while drawing influence from the oral histories of her Afro-Cuban immigrant family's unique interaction and experience with the California environment. In her painting Tender Haze, Bellamy chooses to depict the Washingtonia Robusta palm trees ubiquitous to Southern California, which she views as a “talisman.” For Bellamy, “this piece can be either terrible or beautiful…a blazing fire with a smoky sky or…dried thatch and leaves glowing in the sunset with clouds overhead.”

Venezuelan-born artist Luz Carabaño is interested in exploring changes in perception and the senses, in addition to the concepts of fragmentation, displacement, and retracing through her small-scale paintings. In both Lumbre and Hojas, Carabaño paints on linen that has been stretched over individually shaped panels. In these works, Carabaño plays with green-hues, at times creating the effect of light emanating from within. In Lumbre, which translates to “fire” and “light” in Spanish, an organic light green form resembling both a plant and fire appears centered amidst a dark green background. Through reduced, abstract forms, the image suggests a landscape, one that captures the depth of night and encounters in the dark. In Hojas, which can translate to “leaves” in Spanish, ornamental leaf-like forms are depicted across a lighter yellowish-green gradient background. These leaf forms are black and textured like rough steel bars, and they appear to be frozen, suspended in time and space. The intimate scale of these works invites the viewer to look closely. Each work proposes different ways of looking and engaging with images that feel both of this world and internal.

In Rash (1) and Rash (2), Iranian artist Roksana Pirouzmand seeks to visually tackle the theme of having allergies and getting hives on both a literal and metaphorical level. In these works on view in this exhibition, rows of ceramic tiles weave up the walls and down onto the floor, almost like winding stepping stones or pathways. The unique arrangements of the tiles in these three-dimensional works invite the viewer to look at the pieces from different angles and perspectives (i.e. prompting viewers to peer down to see the tiles on the floor, as well as to alternatively look up and gaze forward to glimpse the tiles on the wall, etc.). In the words of Pirouzmand, in these works she “stretched a stroke of a scratch to go from one side of the room to the other. A stretched scratch on my neck. A stretched scratch on my knee. No success in finding the reason for (the rash’s) recurrence but news was brought in freshly to our home every morning through BBC Farsi.” Rash (1) and Rash (2) are both masterful examples of the use of sculpture to tell a story and to convey a personalized yet universal experience.

Mexican artist Yoab Vera is fascinated with the sensoriperceptual effect of urban environments on the human body and mind, and seeks to stimulate visceral responses through his paintings. In his extremely tactile, textured landscapes, Vera combines the recognizably ubiquitous material of concrete utilized to pave and construct cities with the highly manual medium of oil-stick. Vera’s abstract canvases reference both elements of nature and the contemporary urban landscape, drawing inspiration from the artist’s recent lived experiences in Los Angeles and Mexico. This can be observed in Quotidian_Souvenirs#MEX-LAX_02.2022, in which Vera contrasts warm orange and red-like tones against pale blue and gray backgrounds, recalling the sun and the sky. Vera approaches his aesthetic practice as a form of meditative awareness and as a cognitive exploration of the senses, a method he calls “haptic contemplative painting.” Deep in the core of the artist’s work is a drive to stoke what he terms affective recognition and translation of what is present to the moment, with his paintings functioning both as personalized memorabilia and as blank canvases onto which viewers are invited to project their own experiences and from which they are encouraged to draw their own impressions.

The works on view in Make Room’s Those Lazy, Hazy, Crazy Days Of Summer recall the unique sensations and almost nostalgic memories of summer. These works present the deeply personal experiences of the artists through the pictorial language of abstraction, as well as explore the visual potentials of texture and tactility. In this exhibition, many of the works look at the North American landscape and urban cityscape of Los Angeles with a critical eye, both celebrating its natural beauties and lamenting the negative environmental effects of climate change such as wildfires, drought, and pollution.
Tweet
Share