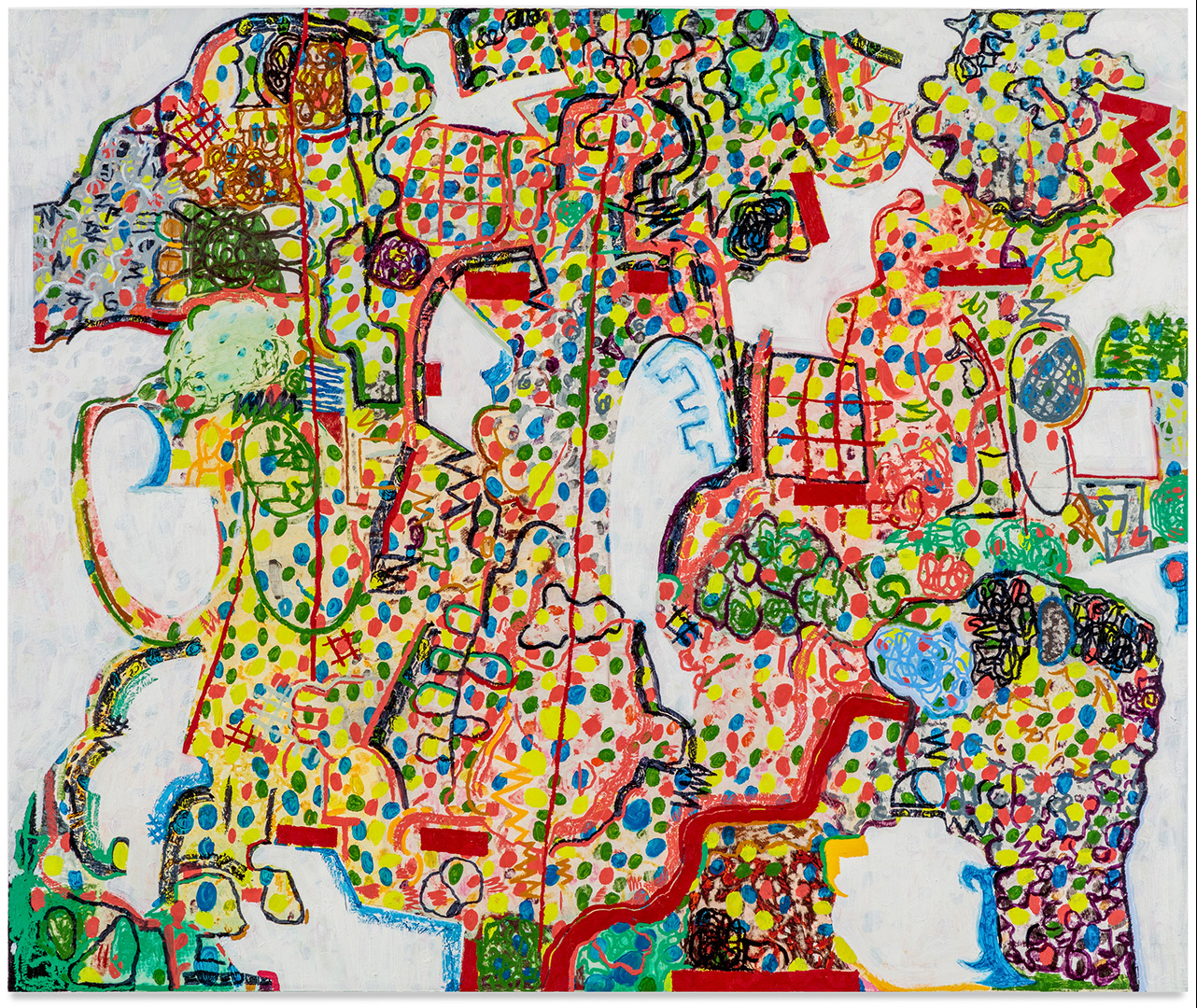 Nick Lowe: Bottleneck on the Freeway

Harper's
8115 Melrose Avenue Los Angeles, CA 90046
Jul 16, 6 PM - 9 PM — ends Aug 27, 2022
Scribble scrabble with the color until you get a satisfying blob. Watch it grow and crash into another blob; sometimes the blobs would have pockets of air and I would try to fill that in with color, like putting ketchup, blueberry jam, or peanut butter into the tiny hemispheres of the bubble wrap.
— Nick Lowe

Harper’s is pleased to present Bottleneck on the Freeway, Nick Lowe’s first exhibition with the gallery. Channeling the chaos and frenzy of urban congestion, Lowe’s abstractions condense elements of the Los Angeles landscape into concentrated forms. The exhibition opens Saturday, July 16, 6–9pm, with a reception attended by the artist.
I started making cityscape drawings about five years ago, which were observations of structures, road signs, architectural features, and marks I observed while taking my dog out for a walk. I think about Charles Burchfield and how he was making observational painting and trying to get all the senses to coexist in a painting—noise, smell, and heat. What would happen if he was stuck in traffic with the windows rolled down? I think I am always working towards imagery, but never quite getting there.
Nick Lowe’s works have no obvious visual points of entry. His crowded clusters of scribbled lines and patterns jostle together turbulently and flatten the picture plane. The eye must begin by selecting an individual mark and following it across the surface, taking in each symbol and each line one at a time. In doing so, shapes and forms come into focus, revealing themselves as vehicles in motion, powered by a kinetic energy to travel and explore new areas of the composition. In Criminal Mischief, a red line bisects the canvas, with sinews serving as offramps to other areas of the patterned field, populated with grids, dots, and hatch marks. Lowe’s disorderly compositions can seem imposing, and are occasionally clouded by blocks of white and gray paint whose thin application acts like smog, allowing for glimpses of the layers underneath. And yet, the considered hues, as seen in Standing Captain, or the restrained color palettes in Keyhole Scene and Swimmer’s Dream, create holistic compositions that soothe the distilled anxiety resulting from the cacophony of symbols and lines.
As a kid, I loved watching Popeye and the Fleischer brothers’ Superman; the quality of the animators' lines are quick, clean, and precise. I aspire to something like that—a confidence with shape and form. My paintings live between these cartoons, abstraction, and graffiti. How can you avoid graffiti while driving in LA? I always feel weird talking about graffiti because I am so outside the culture of it, but I love looking at it and it somehow ends up informing my visual language. Not a day goes by where I don’t see a minimum of a hundred tags. It’s all around the landscape. It’s on the dumpsters.

Lowe’s quick-mixed and rapidly applied surfaces mimic the density found on graffiti-laden walls, where individual tags become consumed within an amalgamation of letters and gestures. Working simultaneously on multiple canvases as well as drawings, he allows for the cross-pollination of competing gestures that build tension through their proximity to recognizable imagery. However, the reductive process of methodically sanding down and wiping off layers renders the remaining marks as intense negotiators of line, color, and texture. Together, the paintings and drawings in Bottleneck on the Freeway seek to personify the energy of the LA Landscape rather than depict faithful renditions of forms.