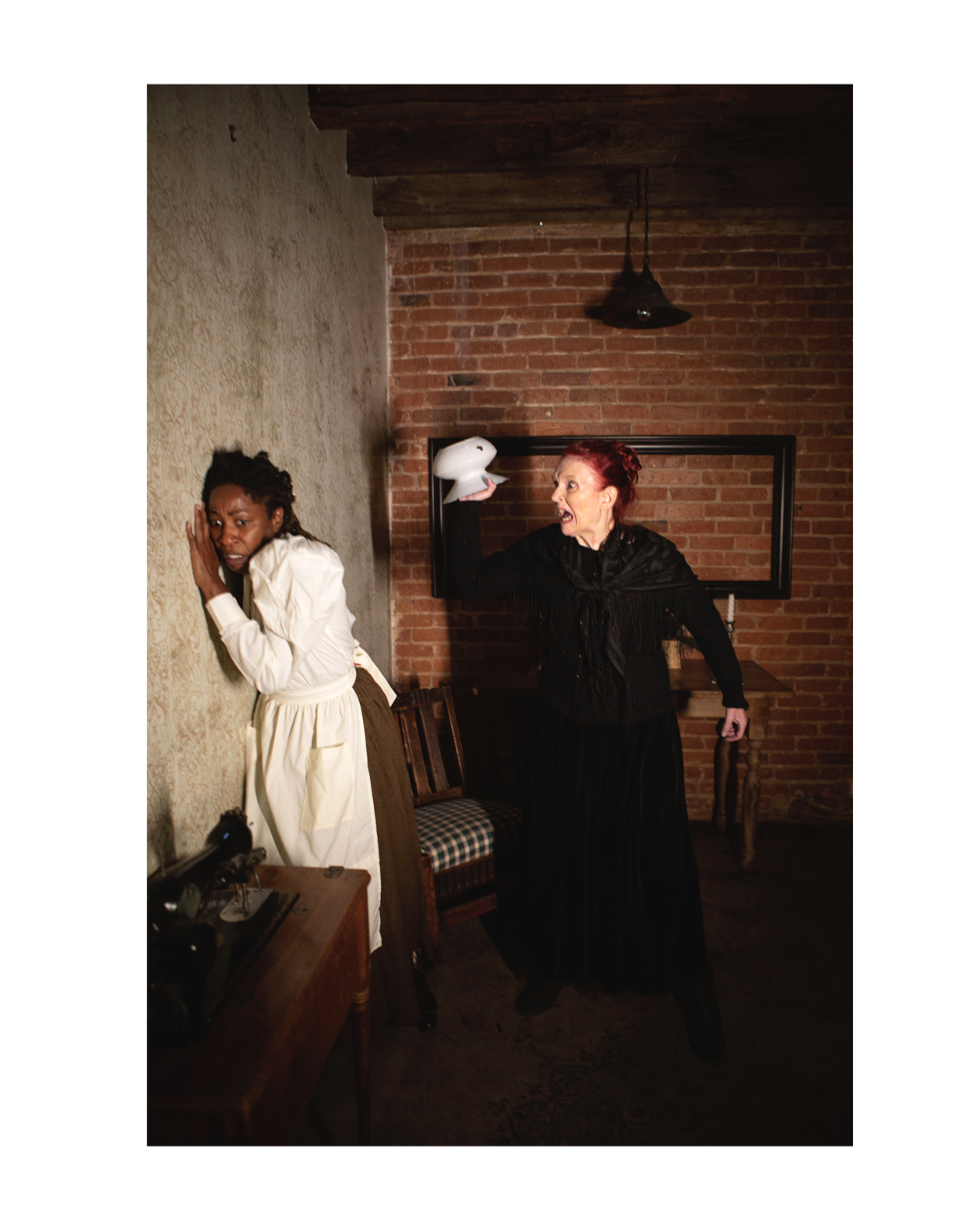 An Antebellum Theory seeks to deconstruct history by reconstructing a new reality that changes the future; that changes how we engage now as women. There was once a time when white female violence against the Black female body was an acceptable and tolerable norm and although white female violence still exists the degree has morphed. We now imagine if instead of violence at the root of this relationship, there had been caring, empathy, friendship, and maybe even love. An Antebellum Theory is a cultural reckoning, a vessel to heal old wounds that still simmer beneath the surface of our society after slavery and look back at the lives of Virginia Christian and Ida Belote. A woman and a teenager who both become casualties of a violent system.

Theatre Roscius’ process for this series was first Influenced by artist Takis’ Ballet Magnétique (1961) featuring a black and white magnet dancing around one another never touching. Takis’ ability to create sculptural space using magnetic fields allowed Strickland to imagine a relationship of many kinetic possibilities of existence between Virginia Christian and Ida Bolte if racism had not been a factor of their reality. We hope this physical photography series honors the life of 16-year-old Virginia Christian and 72-year-old Ida Belote. If they had been born in our time perhaps they both could have lived and even thrived.

In this exhibition, we re-imagine two paintings: Felix Vallotton’s La Blanche et la Noire (1913) and Édouard Manet’s Olympia (1863). In reversing Manet’s painting, the act of reconstruction is activated to break down the distortion of white oppression, and thus we can reclaim the Black Female body in any space. Elevating the Black Female body from the maid to a woman in ownership over her body, we reify the existence of Mitochondrial Eve who lived in East Africa 200,000 years ago. We take Felix Vallotton’s (1865-1925) La Blanche et la Noire (The White and the BLACK) and decolonize as well as break down volatile physical restrictions put upon the Black female body for hundreds of years. In going back to our Mitochondrial Eve roots we create new space by changing our relationship to colonization in a physical and intentional manner.

“To name ourselves rather than be named we must first see ourselves. For some of us this will not be easy. So long unmirrored in our true selves, we may have forgotten how we look. Nevertheless, we can't theorize in a void, we must have evidence. And we—I speak only for black women here—have barely begun to articulate our life experience . . . It is slow and it is painful. For at the end of every path we take, we find a body that is always already colonized.”
~Lorraine O’ Grady

*Theatre Roscius also has performances for This Grief Will Be of Use | Part 2 with Constance Strickland & Michelle Holmes each Saturday at 2:30PM, 3PM & 3:30PM in Classroom 3 at ArtShare L.A
Tweet
Share