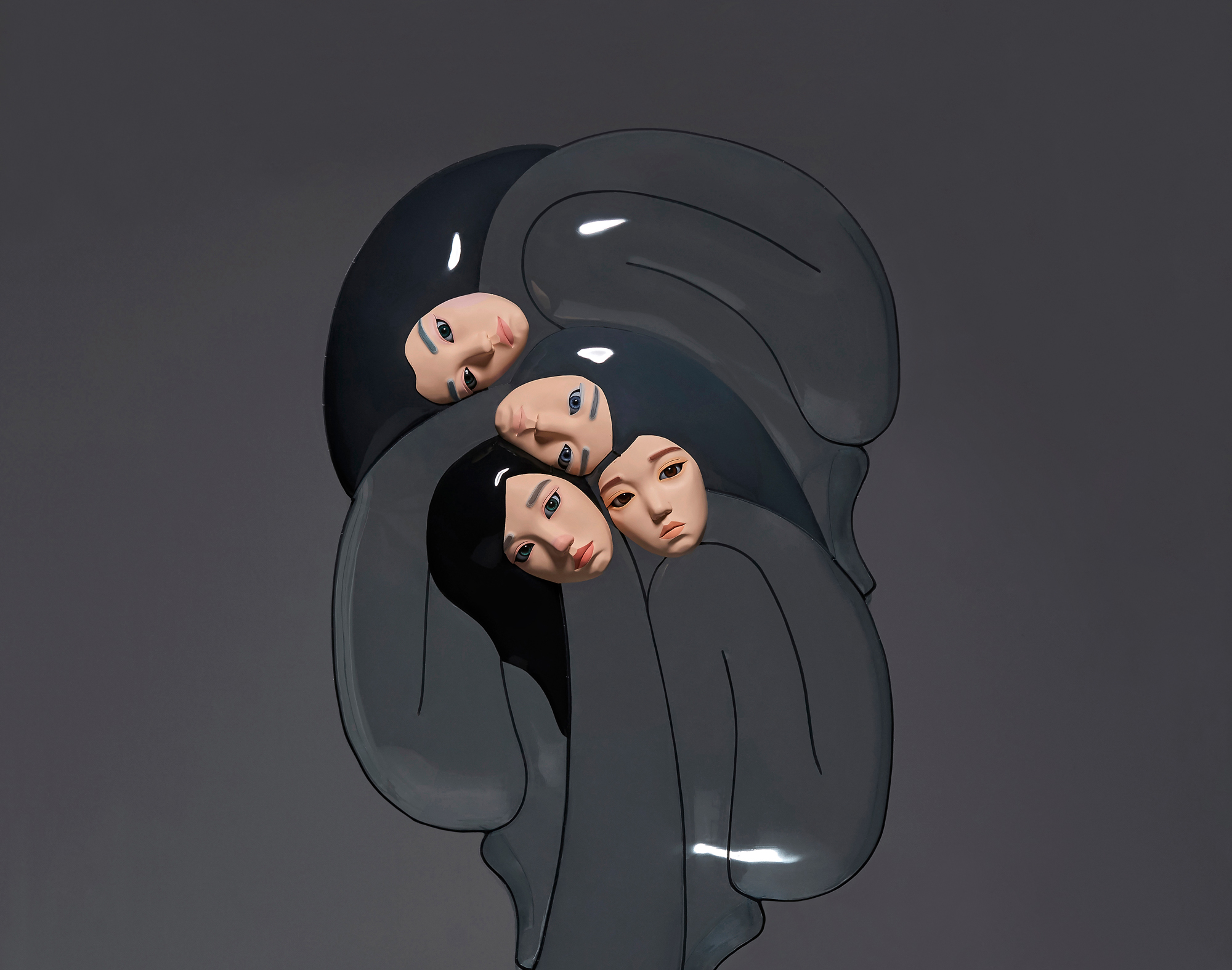 Working with a cast of semi-transparent sculpted characters, Jinyoung Yu explores the disparity between the outer and inner self. Yu’s work acknowledges the anxiety of social situations and exposesimplicit acts of cover-up one engages in when adhering to social conventions. This critique of social modes is developed using two opposing materials: vibrantly painted plaster and transparent PVC.

The weight of the hardened façade of these figures is carried by their thin bodies, and some even appear to carry the weight of others. As the artist captures the many faces we have created for ourselves, she implores us to examine who we truly are. Behind the flamboyant exterior, outside of ever-present hierarchies and oppressive social structures, we may be left with a hollow shell conditioned to be invisible.

Jinyoung has dealt with immense social anxiety and avoided being the center of attention from a young age. Though she as an artist utilizes extroverted expression to convey narratives, her introverted nature manifests in the transparent bodies of her sculptures. The subtle, nearly impassive expressions on the masks relate to the artist’s childhood, where she had to quickly notice subtle differences in the facial expressions of her parents to avoid being berated.

The artist’s exploration of family dynamics and ego ultimately led her to delve into the insecurities and inequalities prevalent throughout society. She shifts her focus from the individual, to society, to the world, and reflects on our reality where no one can escape the weight of ‘life’. Jinyoung Yu exposes the dualities that exist within us all, urging viewers to look inward for a solution to break this cycle. Jinyoung Yu was born in Seoul, South Korea, where she lives and works. Yu received an MFA and BFA in sculpture from Sungshin Women’s University, Seoul, South Korea. She has exhibited in museums and galleries internationally, including the Vestfossen Museum, Norway; the Seoul Museum of Art, South Korea; the Yellowstone Art Museum, Billings, MT; Gyeongnam art museum, Gyeongnam, South Korea; and Woljeon Museum, Icheon, South Korea. ‘the LIFE II’ is in collaboration with CHOI&CHOI Gallery, Seoul, South Korea; and Cologne, Germany.
__

Shoshana Wayne Gallery is pleased to present ‘Inquires in Abstraction’ featuring Philip Argent, James Richards, and Brad Spence. The exhibition brings together the work of three California-based painters who use abstraction to investigate materiality, the human condition, and the digital world. Each artist has presented two paintings created in the past year, which reflect the turbulence and uncertainty of the present moment. ‘Inquires in Abstraction’ will be on view from August 6th through September 10th, 2022, with an opening reception on August 6th from 2-5pm. Philip Argent’s paintings present an interpretation of the swift flow of experiential and technological influences. They also offer a counter to that rapidity; their meticulous surfaces and processes invite a slow read. Paint is applied using a variety of methods (masking, printing, atmospheric and linear) and allows for an intuitive selection of forms that often mutate, reappear, and transform as a series develops. The use of vivid color relationships stem from observations of natural phenomena, personal memory, and the influence of commercial or screen-based sources. Color plays an intrinsic role both as an indicator of depth and shape and as a referent for a non-objective internal logic.

Brad Spence’s paintings are improvised abstract spaces for fantasy projection. Viewers’ bodies are mobilized in search of a distance where the scenes come into focus. However, clarity is just out- of-reach as what resembles human forms dissolves into fingered smudges at close inspection. The mingled clusters of marks suggest social events, the nature of which is elusive and changing. They shift between celebrations, rites of passage and rituals of the carnal and carnivalesque. The paintings are intended to provoke viewers’ subconscious yearnings as expressed in social ceremonies and unsober excess. They are meant to activate both memories and their erasure.

James Richards’ two paintings initiate a new body of work inspired by the building technique of wattle and daub. Instead of mud on top of woven branches, paper-mache is applied to the expanded weave of the canvas. The paper-mache is then treated to look like unfired clay. An open structure of various materials including re-purposed fabric, painted areas that mimic pen and ink drawings, and an ample amount of negative space contribute to an alchemy of surface and support. Philip Argent received an MFA from UNLV and a BA with honors from Cheltenham School of Art. Argent lives and works in Santa Barbara and teaches in the Department of Art at UC Santa Barbara. James Richards holds an MFA from Art Center of College and Design, Pasadena, CA and a BFA from California State University, Fullerton, CA. Richards lives and works in Los Angeles. Brad Spence holds an MFA from California Institute of the Arts, Valencia, CA and a BA from the University of Florida, Gainesville, FL. Spence lives and works in Los Angeles.
Tweet
Share