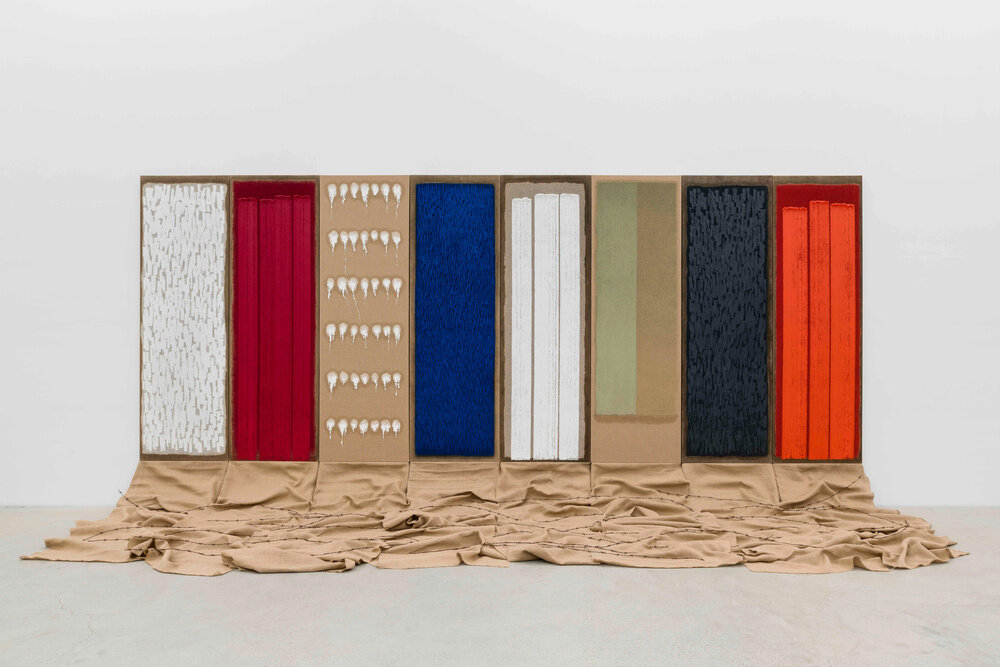 Ha Chong-hyun | Yukie Ishikawa | When the Sun Loses Its Light

This exhibition takes a retrospective look at Ha Chong-hyun’s pioneering practice and is the first to present Conjunction 20-200 (2020), a monumental installation of eight towering canvases—each of which Ha painted with one of the signature techniques that he developed during the past five decades. The compositions in this massive polyptych are placed in dialogue with thirteen paintings dating from 1972 to 2021.

Conjunction 20-200 stands atop rolls of raw hemp that unfurl onto the floor, interwoven with barbed wire. For Ha, this arrangement evokes the earth and refers to his earliest series of multimedia works, made between 1969 and 1973 when he was a member of the artist collective AG (Avant-Garde Association). During this period, he created site-specific installations out of atypical materials—including plaster, timber, newspaper, and, most notably, a series of burlap supports embedded with barbed wire. Both materials were at once mundane yet politically charged features of the urban landscape in the aftermath of the Korean War (1950–53): burlap sacks were used to transport food aid from the United States, while barbed wire fences ring the country’s military bases and divide the Korean peninsula to this day. Ha’s appropriation of these materials broke with the two-dimensional conventions of painting while evoking the authoritarian atmosphere of the postwar era.

In 1974, Ha began his ongoing Conjunction series, which explores the material fusion of paint and canvas through his original bae-ap-bub (back-pressure) method, in which he presses viscous oil paint through the reverse of the coarsely woven cloth so it permeates the fabric and protrudes through the surface. Thereafter he variously brushes, smears, scrapes, and even scorches the paint in pursuit of an abstract composition that exposes the essence of its component materials. This experimental approach to painting as method rather than representation situated Ha as part of a movement that later came to be known as Dansaekhwa, which included peers such as Chung Sang-hwa, Kwon Young-woo, Lee Ufan, Park Seobo, and Yun Hyong-keun. Working in a reductionist aesthetic, these artists variously pushed paint, soaked canvas, dragged pencils, ripped paper, and otherwise manipulated materials in ways that transgressed the distinctions separating ink painting from oil, painting from sculpture, and object from viewer. Six decades on, Ha continues to find new ways to expand the vernacular of his Conjunction paintings.

Blum & Poe is pleased to present new paintings by Yukie Ishikawa. This is Ishikawa’s second solo exhibition with the gallery, and her first solo show in the United States.

This exhibition focuses on new works from the ongoing Impermanence series. Ishikawa began making these highly intricate abstractions in 2012, as she contemplated the ever-shifting appearance of the landscape outside her studio in Hidaka City, north of Tokyo, as well as the transience of her own existence within it. Searching for a means to render the ephemerality of nature in an abstract painterly language, she began to rework earlier canvases that had once seemed complete by adding new layers of lines and grids, some with sand mixed into the paint. Now responding to the given conditions of an existing painted surface rather than a blank canvas, Ishikawa seeks to generate a new pictorial meaning in which the lower palimpsest layer interacts with the form, color, and texture of the superimposed layers.

Ishikawa’s practice is distinct for its deconstruction of Modernist abstraction and the monochromatic, frontal, and vertical-horizontal grids found in Minimalist art by drawing on compositions and techniques found in historical Japanese painting. The artist uses irregular groupings of curved and diagonal lines—reminiscent of the skewed perspectives seen in ancient Japanese scroll paintings—as well as dense optical color mixing to disrupt the viewer’s gaze and prevent it settling on a single point, grid, or layer. Some of the paintings are studded with dense clusters of thickly textured dots, which Ishikawa describes as a contemporary interpretation of the tentai method. Translating literally as “spot and substance,” tentai is an ink-painting technique that dates back to 9th-century China in which trees, rocks, and mountains are depicted through the application of pointillist ink dots, creating a hazy sense of vitality and rhythm.

Previously, Ishikawa was featured in the two-part survey Parergon: Japanese Art of the 1980s and 1990s, held at Blum & Poe, Los Angeles in 2019 and curated by Mika Yoshitake. This exhibition featured paintings made at the beginning of her career, in the context of the Japanese New Painting movement, which developed alongside American and European Neo-Expressionism. During this period, her compositions were based on photographs and advertisements found in magazines and newspapers, which she enlarged, projected, and traced onto the canvas. Deliberately composing and coloring the abstractions in order to obfuscate the identity of the original subject matter, she aimed to create “a pictorial space outside of the three-dimensional space to which those things belonged.”
__

Blum & Poe is pleased to present When the Sun Loses Its Light, with work by Michelle Blade, Ian Collings, Shanique Emelife, Claudia Keep, Lauren Satlowski, and Joey Terrill. Christmas 1980. I was back from college. It’s me and my brother Greg. Or Gregory to everyone else. I was playing “River” on the piano, and we were doing our best Joni. Warbling through the high notes neither of us could come close to hitting. Laughing. There’s a polaroid around here somewhere I remember that Ma took. Found it! Here it is. Loved that night. Has always stayed with me.

I’m gonna get to the point here—some months ago, an eighty-seven-year-old Canadian man was hospitalized after a bad fall. While undergoing a test to check the electrical activity in his brain, he suffered a heart attack. Because the man had a do-not-resuscitate order, the doctors let him pass away as the EEG recorded his thoughts. And what his brain activity scientifically showed is something that has been conjectured forever: our life does flash before us when we die. In the minute before and after his body died, the EEG scan read that he fell into a dream state that revealed his brain replaying memories from the span of his life.

I’m taking the hopeful position that these intimate scenes floating through at the end are the gentle ones, the calm ones—the ones that, at the time, are seemingly small but get dropped and locked in that emotional vault right there in our chests, then travel up and forever get held tight.

With that in mind, here's a few moments, taken and made real for us. Some delicate paintings on wood riffing off photos that Claudia shot on her phone while wandering or just being. Shanique’s family, friends, and herself from those snapshots that we hold dear. Michelle’s daughters lovingly rendered almost like a secret whisper and reminder of what is, now was. Lauren catching the last lights of an LA day, radiant and abstract. Ian, anchoring the truth that we have this vessel that keeps it all inside, ours alone really, and that’s OK. And Joey, sweet Joey, who has seen so much loss, yet giving us that seemingly flippant second that might go in a blink but actually never leaves.

For all of us, those touches are here if we are present and have held them, and now let them come back. They are alive, just like the work as witness that you are seeing, hopefully feeling. We all need to keep these moments wherever we keep them, or we really have nothing. Although it can be difficult, we can carry them and bring them back when we want. It’s ok even if it’s difficult because it’s the most important thing we have, here, now, in us.

When Greg passed, he was in his bed tucked in and smiling. I'm hoping he had just been in his bedroom at fourteen on a rainy February night, candles, Tapestry on the record player and Hilary braiding his long brown hair; then Mt. Baldy on a summer morning with the sun tossing off kaleidoscopic rays through the trees; Lance on Fire Island on the beach in the late afternoon reading him passages from Lolita; Thanksgiving 1974 in the wood paneled dining room on Weyburn, the last time we were all there together...
—
Jeff Poe