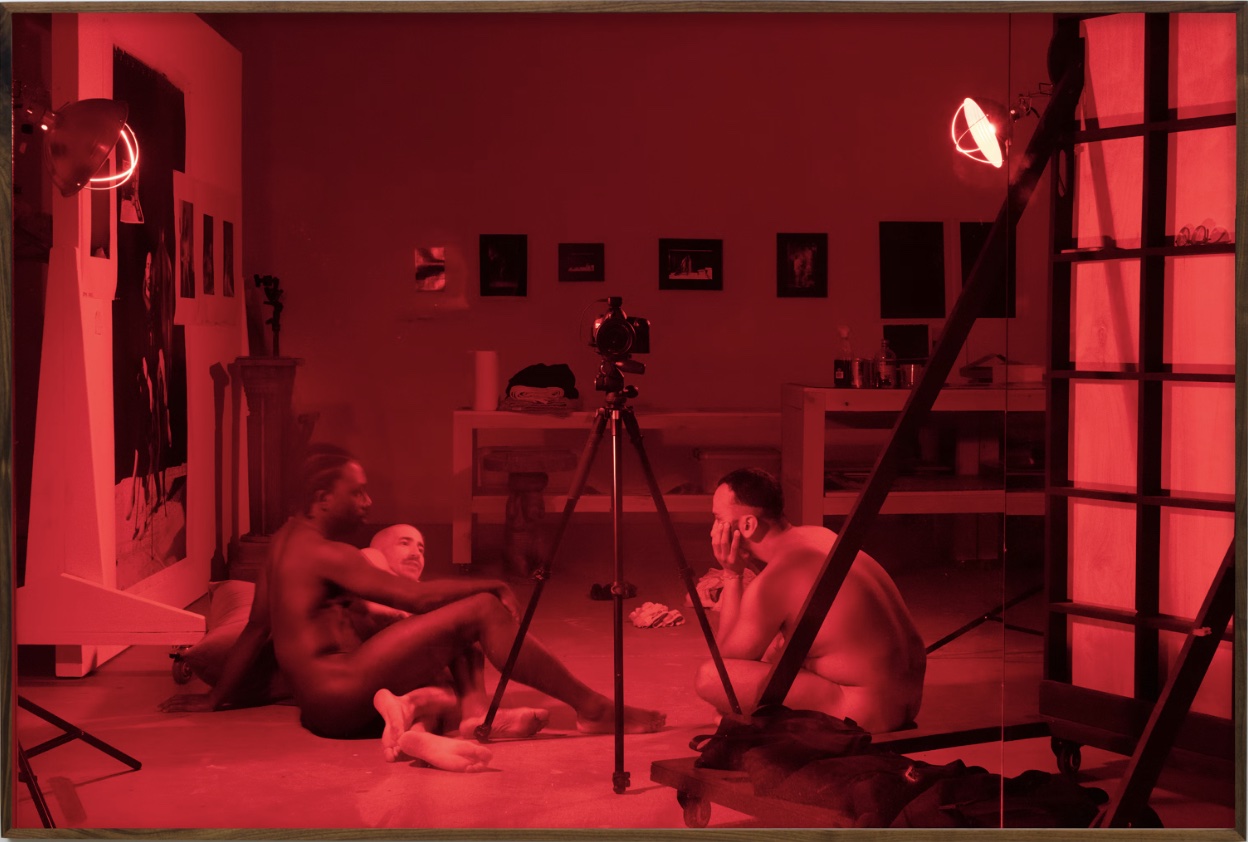 In 2021 Sepuya moved into a new, larger studio which allowed the elements of his shooting space to come together in a new configuration. While researching photographs of 19th and early 20th century daylight photo studios, he also accumulated a mix of 19th century and contemporary props and furniture in the daylight studio that playfully reference these iconic sites of early portrait photography— Asian woven rugs, large velvet cushions, European pedestals and chairs, African stools and fans, and gardening implements. Shooting in this mise-en-scène, Sepuya explores different positions that queer, racialized bodies occupy within the intimate dynamics staged by studio spaces where friends oscillate between subjects of portraiture and stylized model studies. He himself takes up the position of the photographer behind the camera, the invisible laborer who maintains the space, and and even a model a la Alexandre Skeet, an artist in his own right who was photographed by European American F. Holland Day. By drawing out these associations and modes of relation, Sepuya entangles the pleasure of exhibitionism and leisure with histories of labor and objectification that can be glimpsed within the archive.

The studio has always been a protagonist in Sepuya’s photographs. Reflected back to the camera via one of several mirrors in the space, the studio is delineated as a private site in which camera, objects, and people interact. When figures are present, no matter how intimate the scenario, they are protected from the viewer’s intrusion and even the objectification of their gaze by the clear boundary of the mirror’s surface; the photograph indexes a reflection on a surface rather than bodies, space, and other objects. In the Daylight Studio photographs, the enclosure provided by the mirror also acts as a foil to that older mode of image creation, epitomized by the work of Holland Day, where the photographer was often engaged in creating imaginary epistemes for racialized and gendered types that would be used to craft public narratives; defining how people see and are seen. In Sepuya’s studio, models are friends and their interactions, poses, and presentation in front of the mirror are self-determined, rather than directed by the artist toward a specific end; the studio is a private stage on which subjects are encouraged to locate the pleasure of playing with self-presentation.

In contrast to the reflective and symbolic nature of the Daylight Studio works, Sepuya’s Dark Room Studio photographs emphasize the unique formal and technical elements of shooting photographs in low light. Illuminated only by red safety lamps, many of the Dark Room Studio photographs are petite dye-sublimation prints on aluminum, showing bodies in the studio over an exposure time of several seconds, their interactions captured as distortion in the images. While aluminum dye-sublimation prints are decidedly a modern, often industrial, print material, these works have an incredible internal luminosity and compellingly smooth surfaces reminiscent of historical photographic printing processes on metal and glass.

Moving from daylight to night and back, the works in this exhibition suggest a multiplicity of potentials in revisiting historic photographs — what may not have been recorded on plates, negatives and prints — and the possibilities of engaging with these historicized sites for creating complex representations and associations in our contemporary moment.
__

Vielmetter Los Angeles is thrilled to announce Mary Kelly: Corpus, an exhibition of Kelly’s ambitious 1984-85 installation, originally made as the first part of a larger project titled Interim. This will be the first complete installation of Corpus, including all thirty panels, in the United States since 1990 when the entire Interim project was exhibited at the New Museum to broad critical acclaim. Kelly is one of the most influential feminists and conceptual artists working today, and our exhibition marks a rare occasion to view her iconic work of the 1980s in its entirety.

Interim marked a progressive step in Kelly’s conceptual, feminist practice. A project in four parts (Corpus, Pecunia, Potestas, and Historia), the exhibition explored the space between the social construction of women and how they experience themselves in relationship to ideas about femininity found in fashion, medicine, fantasy/fiction, the family, and media. The work engages a humorous approach to this conceptual material and to the femme experience itself. It allows the viewer to laugh at her anxieties about aging, her desire for power in a society that will only grant her power under very specific conditions, and the tension between constructing herself and how she is constructed and construed by others.

Visually arresting and narratively absorbing, Interim Part I: Corpus features five groups of three pairs of panels that mimic the scale of advertising images in bus kiosks. Each pair contains one panel, a photo laminate depicting an evocative item from Kelly’s wardrobe (a leather bucket bag, leather jacket, silk dress, lace up boots, and a lacy nightie) and a second panel of block text silkscreened in silver with painted red highlights. The confessional-style prose conveys women’s experiences at a period in life when anxieties about aging, remaining desirable, increasing one’s career or social success, and being the right kind of woman (before it’s too late) come to play. Each successive text becomes more absurd, resisting a literal psychological reading. Corpus examines the socially inscribed shift in what it means to be seen as a woman, from the visibility of youth to the invisibility of age. Each group of six panels is named after one of the five passionate attitudes that psychiatrist Jean-Martin Charcot attributed to hysterical women in the late-nineteenth century: Extase, Menacé, Supplication, Érotisme and Appel, poses that are continually replayed in media images today.

Following Kelly’s iconic Post-Partum Document, Interim, and Corpus in particular, make an emphatic turn to the construction of feminine identity outside of the reproductive paradigm. Critically, while the work is titled for the body, Kelly does not represent the woman’s body in Corpus. In its place are garments that make up a uniform and signify, even today, a specific self-image: serious, stylish, tough, and sensual. Kelly has said that one of her goals in Corpus was to “create a space for the woman, or the spectator in the position of the woman, to send herself up, like the joke. A space where she could laugh at herself and gain a certain distance from that hyperbolic femininity [...] Miming the hysteric in Corpus seemed to be a way of releasing the woman from that moment of narcissistic identification that pertains to sexual difference.”(1) Through its use of narrative, the work emphasizes listening to women rather than looking at them, and discovering the pleasure and erotic charge found in each other’s company.

In the more than four decades since Post-Partum Document was first made and exhibited, the work has become such a fixture of Art Historical surveys that it can be difficult for contemporary viewers to access just how radical this work was when first presented in the 1970s and 80s. The deeply personal work, rendered in the aesthetic terms of highly analytical conceptual art, startled the art establishment and reverberated across disciplines. For many artists and academics, it was their first exposure to the psychoanalytic theories of Lacan and ideas that now have become taken for granted in our understanding of gender as a socially constructed performance, something fluid and mediated, not determined by biological sex. These ideas, and the possibilities they offered through artists like Kelly, ignited a fury of intellectual and artistic activity that continues to inform serious writing and analysis in the humanities, social sciences, and the arts.

Through exhibitions of Post-Partum Document in 1976 at the Institute for Contemporary Art, London and in 1984 at the Yale Center for British Art, New Haven, CT, Kelly became an integral part of a group of artists and critics concerned with women’s issues, gay rights, conceptual art, and post-modernism including Hans Haacke, Dan Graham, Maria Nordman, Jenny Holzer, Lucy Lippard, Barbara Kruger, Sherri Levine, Louise Lawler, Douglas Crimp, Craig Owens, Rosalyn Deutsch, and Jane Weinstock. Intersecting with the “Pictures Generation” artists, Kelly’s Corpus similarly appropriated media images as a strategy of critique. At the time, the art world was still very engaged in classifying artists by “movement” and the stakes of one’s intellectual and creative production were high. Philosophical debates about the concerns of art were a defining part of studio and social life, and artists, writers, and others would often follow each other around the city and the world eager to see how new ideas would develop in each other’s work.

Seen from the perspective of 2022, Corpus is vital not just as a metonym for the heady and human debates of second-wave feminism in the 1980s downtown New York art scene, but also because the questions at its core could not be more timely: How do we know who we are? How is our subjectivity—what we believe ourselves to be—constituted in and by the social order? And who is doing the constituting?
Tweet
Share