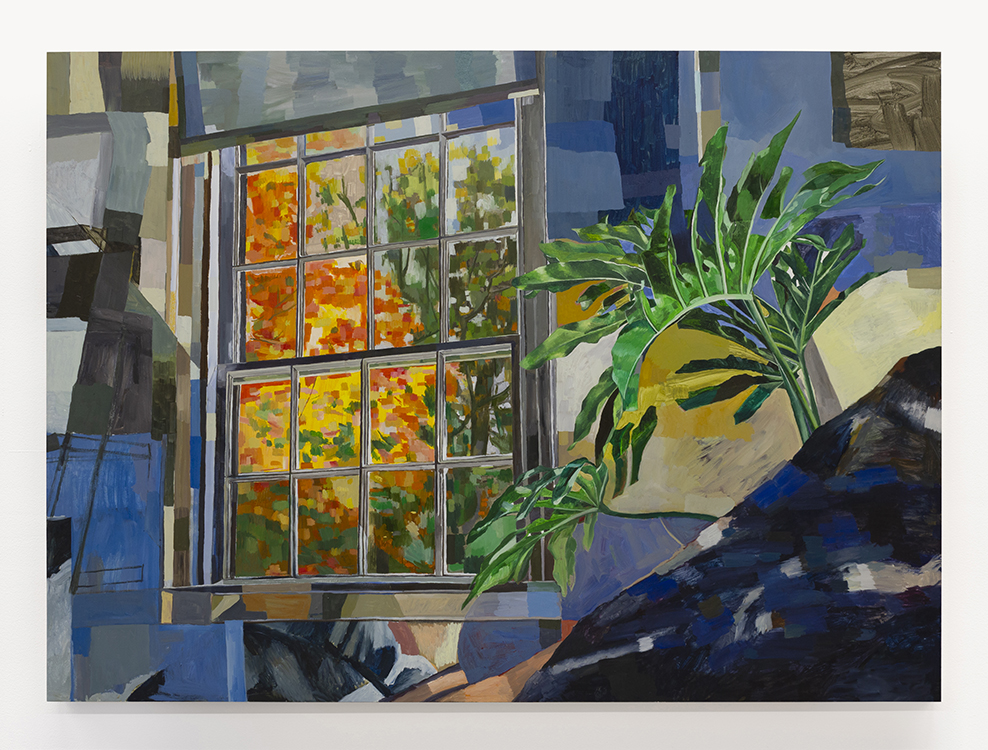 The paintings of Jay Stern seem straightforward – still lifes, static moments in ordinary rooms, homes and neighborhood views – all rendered with a painterly balance of realism and abstraction. But considered as an accretive body that documents both Stern’s day-to-day life and his development arc as an artist, his pieces gradually reveal themselves as laden with metaphor, examinations of personal identity, and complex refracted perspectives.

Middle Bay, Stern’s newest collection, confronts what it means to make home in the throes of change. Recently relocating from Seattle to Maine, Stern chooses Middle Bay, a cove nestled between two peninsulas along a rural road in Maine, as a metaphor for inhabiting a suspended middle space between concrete realities.

There is a clear sense of nostalgia to the Seattle work – a clutched flower, a house captured like a Polaroid through a car window, a collage of houses committing a view to memory. By contrast, the Maine paintings are imbued with energy – fall colors in a pixelated explosion through a window, orange-hued underleaves of an unassuming geranium, stacked firewood peppered with whites and warm reds. These examinations of the subdued power within ordinary objects come at us almost voyeuristically, with Stern providing glimpses of a stream of energy that flows beyond the lens that separates observation from participation. Inside and outside.

The most intimate of this set, Laundry Day #10 (Gym) juxtaposes a mundane task against the energy roiling below the surface of everyday life. Shorts, a tee-shirt, and a ball cap are draped on a wooden drying rack with jockstraps in the foreground, in a type of subject matter double entendre. The outer layer of clothing is a publicly presentable "disguise" that homogenizes, but the jockstraps become a marker of identity that subverts heteronormativity and signifies erotic energy in gay culture. The chosen clothing captures the tension between the safe and the forbidden, between invisibility and exhibitionism. Stern begins to employ these paintings as portraits of himself and others that both solidify the past and celebrate dynamic personal evolution. The laundry rack here, and throughout the Laundry Day series, provides a reliable base, compositional architecture that rarely shifts but spotlights different items that are allowed to breathe and dance fluidly, representing the continuous relationship our expression through clothing has in embodying our deepest identities.

Middle Bay also reveals the surrealism in mundane objects, a microcosm for the strangeness inherent in real life. Rather than jarring images and heavy-handed contradictions, Stern injects subtle irrationalities that gradually melt into focus. With echoes of Diebenkorn, recognizable objects play against abstractions – elongated lines and angles created by abutting color blocks that fracture space into stacked layers rather than single planes, colored polygons in saturations that don’t exist in reference images and compel the eyes across the piece in leaps rather than sweeps, paint application in which paint seems to use the artist to express itself rather than the reverse. Soft and drastic, credible and bizarre, fading versus emerging – Middle Bay shows Stern working with the world’s dichotomies to cement links between his past and future.