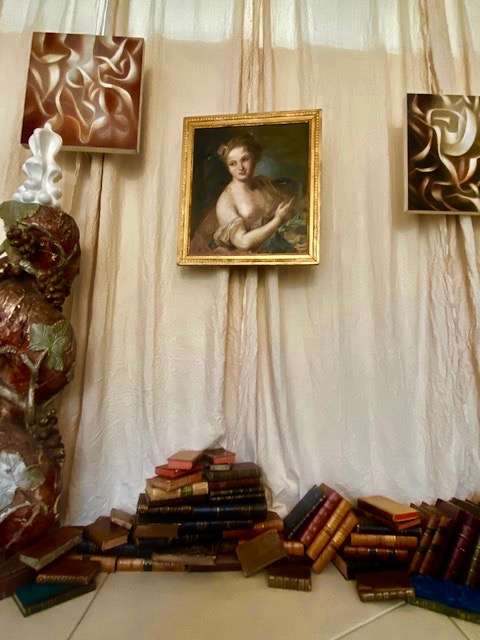 Shane Guffogg and Vramyan Interiors: The Past as Future is Present - Conversations Through Time

"The Past as Future is Present – Conversations Through Time” in collaboration with Shane Guffogg, Alex Vramyan, Lucasz Jiannowski of Vramyan Interiors and VC Projects, will curate two rooms located at El Nido Art Space, Los Angeles. The group worked together to create a collection of contemporary art themes amongst historical works of antiquity. This setting is a provocative art installation questioning the ephemeral nature of time while creating an enigma infused by the objects, furniture, paintings old and new, for the observer to complete.

In one of the rooms, Vramyan Interiors resurrects a modern interpretation of a traditional altar, but instead of the traditional devotee being displayed at the center, Alex Vramyan placed Guffogg’s large-scale "Sapere Aude #7" painting that is coded with Augmented Reality, creating a 4th-dimension that can be viewed through a smartphone or pad. The idea was to remove the obvious, creating a new god-head. By simply viewing the painting on ADLAR’s app it moves to the tempo of the artist’s exhalation in tandem with Erik Satie’s “Gymnoédie 3” (1888), recorded by pianist Anthony Cardella. The painting’s title references the Latin phrase ‘dare to know’, first published in The Book of Letters (20 BC) by the Roman poet Horace, and later a phrase associated with The Age of Enlightenment, and Immanuel Kant’s essay, “Answering the Question: What is Enlightenment? (1784), followed by Michel Foucault’s essay “What is Enlightenment (1984). Guffogg created his painting in 2017-18, AR was added in 2021. Guffogg weighs into the conversation adding; “Amid the age of disinformation and the weaponization of social media, I started thinking about the word Truth. Is it a concept? Is it tangible? Is it objective or subjective? All relevant questions that are worth asking, because if they are not asked then we are destined to repeat the worst parts of our history – stuck in a loop of recurring wars, famines, plagues, overpopulation, etc.”

The second room presents a different enigma, which is a bit of an apocalypse in the making. The observer steps into a disarray of the past, piles of books on the floor, and a partial salon wall of 17th-century paintings. In the middle of the room is a grouping of Grand Tour Bronzes, one after Michelangelo, another, “Mercury” by Giambologna sitting on an early 20th-century Italian Neoclassical Inlaid Marquetry table, which all represent the past. Amongst this disarray is Guffogg’s repertoire of post-post-modernist paintings and a Carrara marble sculpture. The past informs the future and the observer in the room completes the experience in the present tense, punctuated with a 19th-century French Regency Style Mirror with Heavy Spotting. Vramyan Interiors brings a fresh and insightful view combining antiquity amongst Guffogg’s paintings and sculptures influenced by ancient civilizations, human existence, and contemporary literature.
To add to the atmosphere on opening night, El Nido worked with pianist, Anthony Cardella to curate a program of Minimalist works for an atmospheric soundscape, that will include, “In a Landscape” by John Cage, Timo Andres’ “How Can I Live in Your World of Ideas” and John Adam’s “The Bright Motion Movement 1.”

Together Chapman and Guffogg have formed a unique installation with Vramyan Interiors to create new narratives that bring forth a balance of philosophical lyricism and modern art theory. Guffogg, who has penned himself as a post-post-modernist painter and sculptor, will share oil paintings from his 40-year career and Murano glass and Carrara marble sculptures to be exhibited with a myriad of poetic functional and non-functional objects. The visual illuminations will provide unique modes of engagement that serves as a portal to contemplate art through the ages, as well as highlighting beautiful shapes and lines ranging from the 17th century until the present, creating a bridge between the past and present.

“The co-existence of works creates new narratives that bring forth a balance of philosophical lyricism and modern art theory.” — Shane Guffogg, Artist

EL NIDO by VC Projects opened in 2021. VC Projects was founded in 2014 by Victoria Chapman, who is a British-born independent curator based in Los Angeles. Chapman has spent the past 25 years working in museums, art galleries, and art institutions in Europe and the United States of America. El Nido serves as an art space and refuge for creative endeavors and exploratory pursuits, which may consist of art exhibitions, performances, independent film viewings, and contemporary classical and avant-garde music programs.

Shane Guffogg is an American artist that looks through the lens of humanity at civilizations both past and present and views time as a thread that connects all people. His work is a visual language that is informed by the spiritualism of abstraction and the realism of the old masters. These two ideas are usually seen as separate but Guffogg fuses them seamlessly into works that transcend and become testaments to thoughts that inform us who we are in the 21st century. His artwork consists of oil paintings, mixed-media works on paper, pastels, and Murano glass sculptures. Guffogg’s artwork can be found in numerous private and public collections and museums in Europe and the USA. Some notably the Los Angeles County Museum of Art, Hammer Museum, Los Angeles, Nasher Museum of Art at Duke University, New York, Fundación/Colección Jumex, Mexico City, The Imperial Museum of Fine Arts, St. Petersburg, Russia, The Gallery at the Museum Center, Baku, Azerbaijan, St. Patrick’s Cathedral, New York, Van Pelt-Dietrich Library, University of Pennsylvania, Frederick R. Wiseman Art Foundation, Los Angeles.

Los Angeles-based Vramyan interiors is founded by Alex Vramyan and Lucasz Jiannowski. The partnership between them consists of a long history of expertise in antiquity and fine furniture. Their varied art practice consists of art restoration, refinishing, restyling, free-hand painting: including furniture, panels, and customized wall-covering. Additionally, they specialize in a combined classic interior design. Alex Vramyan is a lecturer of fine antiquities, art history, and furniture design. In early 2022, the duo launched a unisex fragrance line and a unique limited series of wall-coverings is on its way. VC Projects met Alex Vramyan through a friend at El Nido, a desire to collaborate with an antiquity specialist has always been on the horizon, this seemed like a perfect fit as a request was formulated and all players agreed to combine forces!

Anthony Cardella is a Wisconsin native who is currently residing in Los Angeles. He received his Bachelor's of Music from Lawrence University and Conservatory of Music. While at Lawrence, Anthony studied piano performance with Michael Mizrahi, a Yale-educated teacher who studied with Claude Frank, and piano pedagogy with Mary Van De Loo. He worked on campus as a student-teacher and piano tutor and, after graduating with honors, Anthony was offered multiple jobs at Lawrence - a staff collaborative piano position where he collaborated with vocalists and instrumentalists, and also a teaching position at the Lawrence Academy of Music. After working at his Alma Mater for a year, Anthony began studies at the Thornton School of Music at the University of Southern California in Los Angeles to receive his Master of Music degree. Anthony is currently working on his Doctorate at USC
Tweet
Share