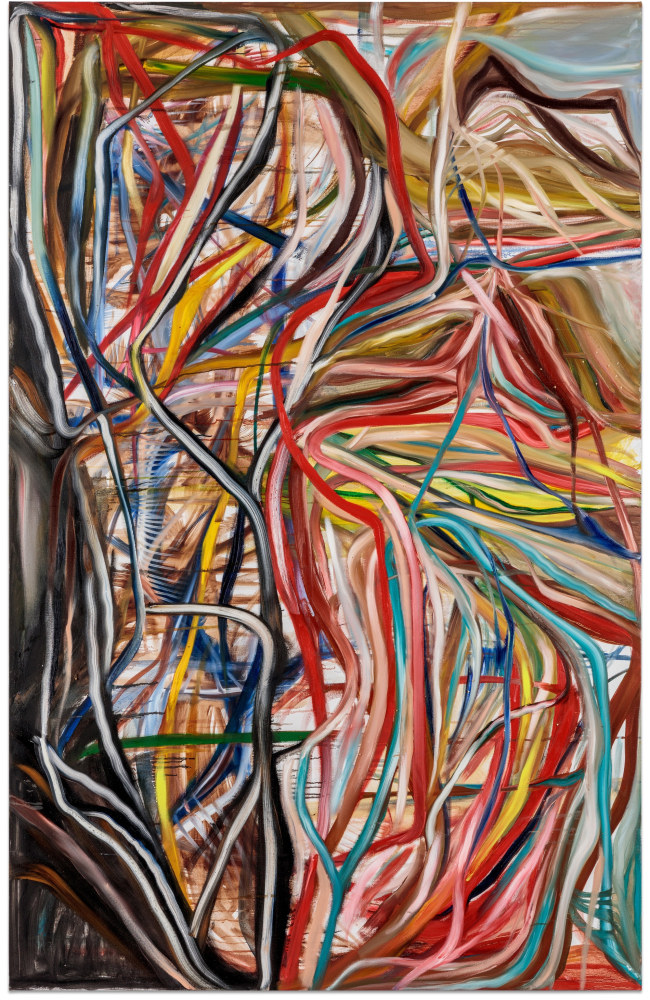 Harper's
8115 Melrose Avenue Los Angeles, CA 90046
Sep 16, 6 PM - 8 PM — ends Oct 29, 2022
Harper’s is pleased to present VH Farm, Tanya Ling’s second solo exhibition with the gallery and her first in Los Angeles. To prepare this body of work, Ling spent the spring season residing at VH Farm in Somis, California, where the equestrian culture and Californian landscape presented a stark difference from the urban surroundings of London, to which the artist is accustomed. Presenting a selection of large-scale en plein air paintings, the brilliant colors and gestural marks in VH Farm are an interpretive response to the visually and emotionally stimulating environment in which they were produced. The exhibition opens on Friday, September 16, 6–8pm, with a reception attended by the artist.

As Ling began this series, she created each painting outdoors, often leaning her hulking canvases against trees or hedges on the farm’s grounds. Allowing the passages of her smooth, fluid brushwork to be interrupted by various natural elements—grains of sand and dust blown by passing breezes, insects finding themselves stuck on surfaces, blades of grass adhering to the wet pigment—the artist embraced the interplay between these rustic interventions and her colorful backdrops. In addition, Ling adapted her linework from studying the horses on the farm as they exercised and worked through dressage drills in the farm’s specialized arena. She found that the rigor and routine of the sport could be translated into the rhythm and forms of her brush. By combining this with the unpredictability of what her surroundings might add to each painting, she struck a balance between her own hand and that of nature, as an attempt to express the essence of her surroundings rather than simply reducing it to an approximation.

The works of VH Farm will be shown alongside Line Paintings, a monochromatic series of works on paper, rendered in ink, which were completed in London in 2021. The two bodies of work open a dialogue; whereas her Line Paintings explore form through curvilinear streaks that trace her movements, Ling’s oil paintings seek to animate it. The rich color palette expands the uniformity of the Line Paintings and provides her sinuous lines with a multichromatic elasticity required for the pictorial roundness of encapsulating nature. In works like Sir Heinrich VH (Heiny), a band of black overlaid with white bisects the composition into one of color and vitality and the other of darkness and destruction. Elsewhere, the varying reds of Osiris (Ozzie) Redbad Fan have an aggressive liveliness that can be offset by the cool blues and browns of Wolfe Fokke Fan Galingastate.

VH Farm marks a new chapter in Ling’s practice, one in which the artist begins to explore her own place and scale within the expanse of nature, following in the tradition of the American Modernists. The rolling hills, canyons, and sprawling bounty of the landscape all serve to give the artist a new sense of scale and place. In this new body of work, Ling unearths the rich and fertile majesty of the American West.


Tanya Ling (b. 1966, Calcutta, India) received a degree from Central Saint Martins, London in 1989 prior to a career in the Parisian fashion industry. Upon her return to the UK, Ling, along with her husband William, opened the contemporary art gallery Bipasha Ghosh; in 1996 she produced her first exhibition of drawings in artist Gavin Turk’s studio on Charing Cross Road, London. Most recently, her work has been exhibited at Harper’s, Los Angeles and East Hampton (2022 and 2021); PM/AM, London (2022); Newport Street Gallery, London (2019 and 2017); Mayor Gallery, London (2018); and Darbyshire Framemakers, London (2015). Over 50 of Ling’s works have been acquired by the Victoria and Albert Museum Prints and Drawings collection, in addition to a collection of paintings and sculptures acquired by Damien Hirst’s Murderme collection. Ling lives and works in London and is represented by Harper’s.
Tweet
Share