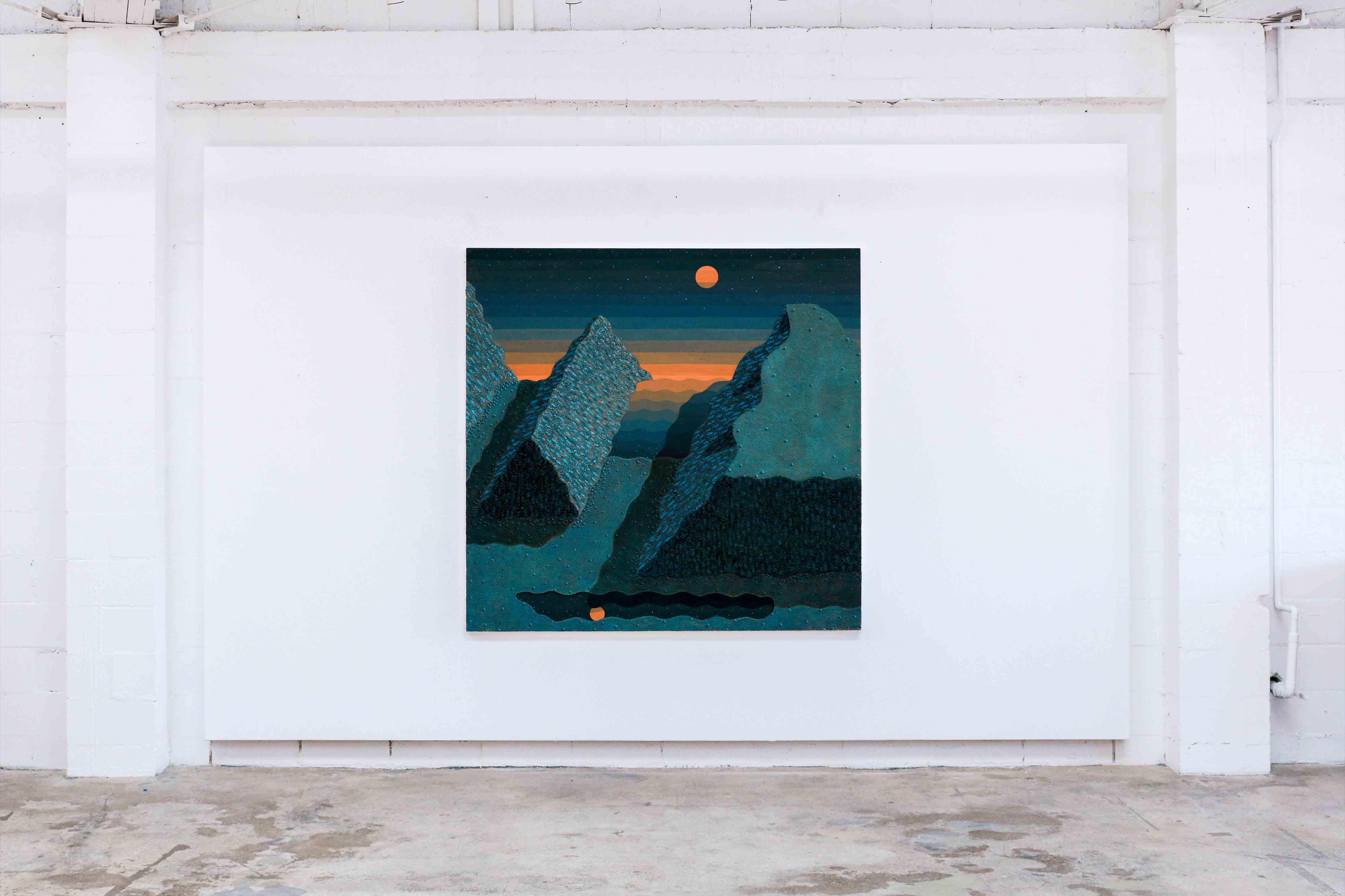 The works in Overlook depict architectural forms that feel ancient—they bring to mind pyramids, stepped temples, walled cities, and ruins—in a remote desert landscape punctuated by still pools. The surfaces of these paintings, in the vibrant colors of dawn, dusk and night, are composed of sand and gravel that’s been sifted onto oil paint. No living thing is present in these scenes; we might be in a distant future that feels like the past, or in some remote corner of our current world. Structures like these were present in Ryan’s body of work prior to Overlook, as was the use of sand and decomposed granite in the paintings’ surfaces. New to this exhibition, however, is a distinct perspectival shift. Ryan’s past paintings featured a bird’s eye perspective that brought to mind aerial photographs or maps; the viewer never saw the sky. But in these paintings, we see structures set against a horizon line. The sky has entered the picture—exquisitely—and with it has arrived a mesmerizing sense of shifting time. The sun and the moon have appeared, and are brilliantly reflected in water. The atmosphere is depicted in distinct strips of advancing sunset shades, like the darkening hues on a paint swatch, as if we are seeing the various stages of a transitioning sky in a single painting. This brings to mind the tendency of Renaissance painters to render events that take place in succession within a single canvas. One pool’s surface seems to portray two moments at once; in separated sections, we see both the moment the stars have come out, and just before, when night is an unbroken hue. In this world, which might be the past or the future, it seems as if time is both ever-advancing and simultaneous.

Gazing at these works, we try to locate ourselves in history. Yes, we could be looking at ruins from a vanished civilization, but we also might be glimpsing a digitized future. A point of inspiration for Ryan has always been the curious landforms and structures that are used by programmers creating backgrounds for video games, and a resonance with digital rendering is present. Another point of inspiration is the Industrial landscape, with giant concrete domes and towers, which, considered without inhabitants, can seem futuristic, and, in their monolithic proportions, will likely survive us. What might they look like when they are ruins, and are encountered by future beings that wonder how we used them, and why?

The works are rendered in a vivid, and sometimes electric, palette of dawn and dusk tones—ochre, gold, canary, peach, salmon, tangerine, burnt orange and clay—as well as all the blues of night. Additional flashes of brilliant color—like royal purple—can be glimpsed as a painted underlayer.

In constructing these works, Ryan begins with a drawing process, then applies thick layers of oil paint. Next, he affixes sifted sand or decomposed granite to create built-up surfaces that interact with painted depths in fascinating ways. Plateaus, crater-like indentations, stepped levels, hillocks and gables are rendered with delicate shading so that the paintings present a near trompe l'oeil effect. Add to that the literal shadows cast by the rocks and sand mixed into the paint itself and you have an experience of varying depths that are both actual and depicted.

The result leaves us with a pictorial puzzle to consider. The larger structures depicted are flanked by much smaller haystack-shaped mounds; the inclusion of these tiny architectural forms keeps the viewer’s perspective shifting. Without the presence of a human figure to indicate scale, one wonders whether the larger or the much smaller mounds might be the size of the beings that made them.

The presence of these smaller structures also gives us more information about the world we’re glimpsing than in Ryan’s previous works. Here, we might begin to imagine a scene—we might be seeing the corner of a ruined city-state, for example. In this way, these works begin to feel narrative.

The absence of people is felt in these paintings, but so is the presence of some living intelligence—whomever or whatever built this, whenever that might have been. One wonders: are these structures still in use, or are they remnants of a society long perished? As members of a society considering its own possible demise, these questions feel important, and timely. If our largest and most permanent structures will remain to tell our story, one wonders, what story will our remnants—however beautiful—tell of us?
Tweet
Share