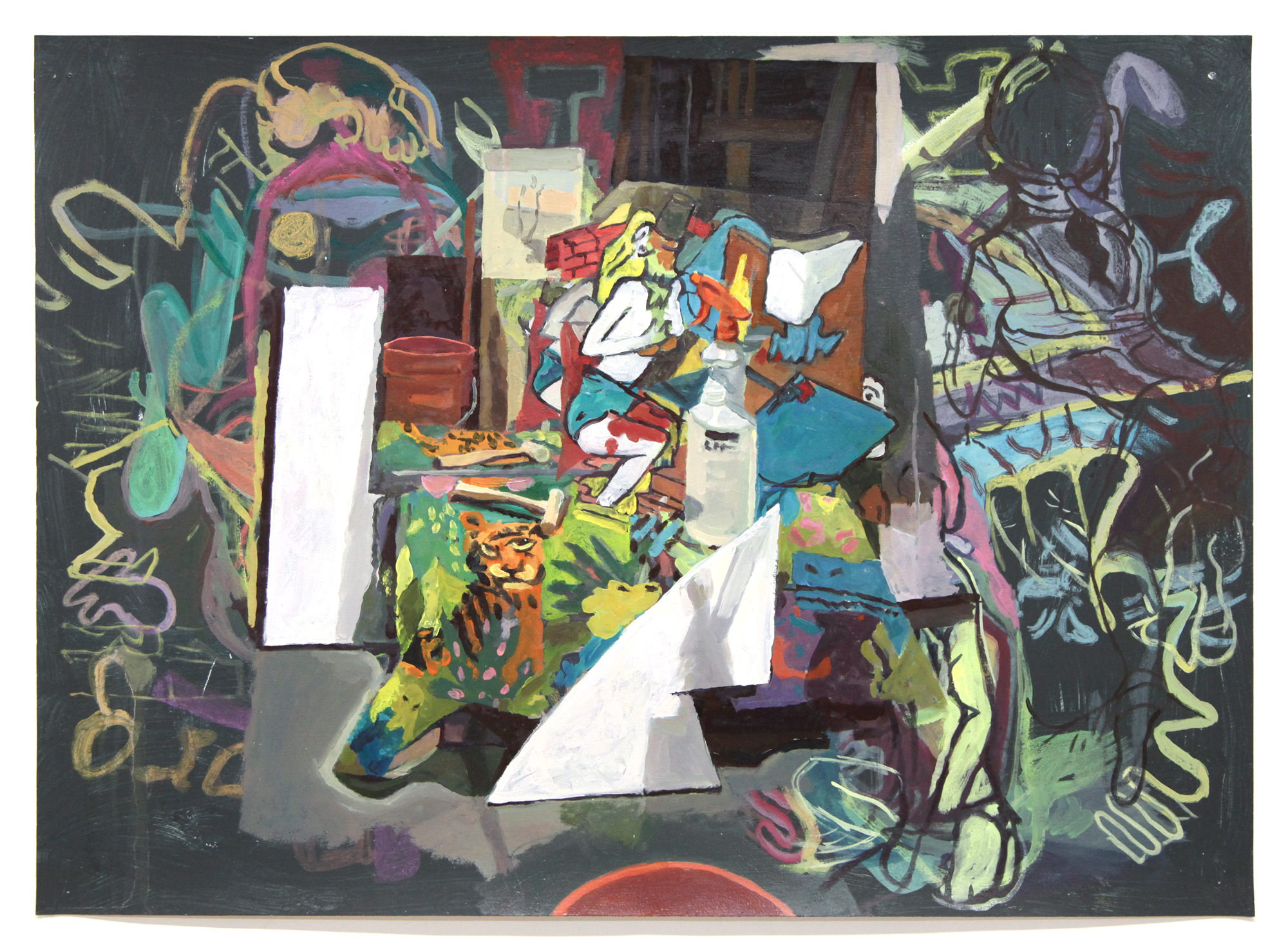 Gattopardo ✨
2626 N Figueroa St, Unit C, Los Angeles, CA 90065
Sep 10, 6 PM - 8 PM — ends Oct 08, 2022
An unshakable urge to do it all, see it all, experience it all—clangs against the observation that everything is growing, changing and evolving, and the assumption that, at some point, everything that can be done, will. But the cities dreamed of in childhood have become unrecognizable. Galaxies once passed by in a cardboard box strapped to a warp drive have been not only receding but accelerating, and now flee at the speed of light. There is no such thing as observation of a preexisting world with a fixed inventory, only a relational, osmotic participation within one. From the fracas of negotiations a prospect of departure presents itself.

New Rules for Painting brings together Elliott Hundley and Daniel Talbot and a collection of drawings that inhabit a form of departure that functions similarly for both, in their own distinct way. Drawing plays a crucial role in the practices of both artists, in which they often tackle directive and laborious projects and subjects. The intimacy of paper invites a rejection of the conscious thought process, allowing for manic bursts of material and method. The attractive gravity for the viewer is intensified through the sensitive, forthright gestures and illogical collisions, pulling the eye yet closer to the scratches, smudges, bleeds, and tears—a petri dish for the cast off microbes of creative impulse that prefer the nutriment of wood pulp over agar.

Hundley describes his drawing practice almost as if he were moonlighting, culling material and thought from the detritus of the intensive sculptures, paintings, and collages made through the daytime hours. Spare clippings, papers, and materials become marks on substrates ranging from Rives and Kitakata to cheap pads and discarded pages, any of which may get glued together to expand pictorial space in a moment of need. He compares the practice to dreams organizing daily cognition. Created under cover of night, they assimilate the ideas of the day, and needn’t involve any action at all. They are dated the day of completion, the final act of which may consist of simply deciding it is done, having perhaps waited years for that final quiet gesture.

Talbot, whose process has had a significant influence on Hundley’s in their over twenty-five years of friendship, stresses that his other work would cease to make sense without the drawings, and vice versa. The drawings, not unlike doodles in margins—or in fact exactly like doodles in margins—don’t capture a snapshot of a moment in time, so much as a series of moments unfolding, as an internal dialogue traces both a logical linearity and its own rejection, with scattered drop-offs and abrupt changes of subject. Even a word may remain incomplete.

In one drawing, an earnest list of rules to embark on a new path in painting can be observed deteriorating in real time, from a note-to-self to the ironic embodiment of those rules in action. What could be seen as a failure of discipline becomes an imprint of the abandoned or altered efforts we all make that give rise to the unexpected or unintended, but ultimately illuminating. Humorous but poignant, it only initially looks like failure to the as-yet uninitiated.

The moment of departure tracks a nexus of meaning, an abstract intensification of what was left in the other room, in the daylight, in the conscious directives of practice, in the established structures of languages and grammars. Of writing, Talbot says there is something in writing a word that crystallizes something, and what is crystalized may not be an intended, definitive expression, but a tension between the intent and the active—perhaps gleeful—departure from the need.

Departure may not be the right word, at least not in a permanent sense. Something does in fact work its way back into the other room. But even the room metaphor, and analogies about matters of course may miss the mark in their fueling of ontologies of diversion and departure that only perpetuate stubborn, logocentric illusions that don’t hew to the real, nonverbal, anti-rationality of experience and expression. So there is some sense in turning off the allure of directives and linearity, and dropping off words mid-syllable to complete them in some other language, or something that isn’t language at all.