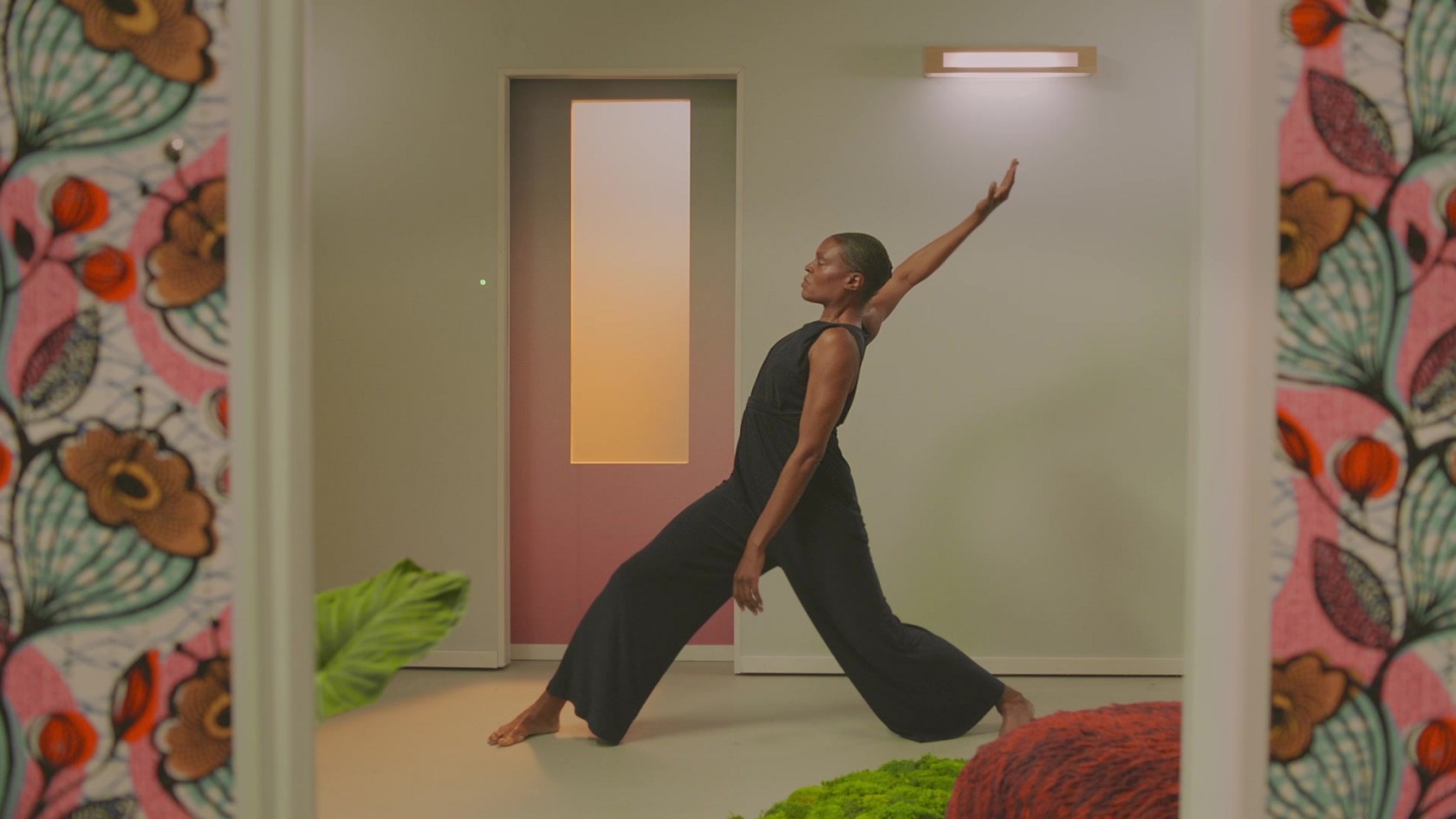 Co-created by Mika Rottenberg & Mahyad Tousi during the Covid-19 pandemic, REMOTE is set in a post-pandemic near future. Unoaku (Okwui Okpokwasili) and four other women living in different parts of the world—all of them fans of a popular South Korean dog-groomer-performer (Joony Kim)—discover a mysterious portal hidden in each of their homes with universe-altering consequences.

PRODUCTION DETAILS
REMOTE was produced, cast, and crewed primarily in New York City and in the Hudson Valley during the Spring of 2021. The film was shot on sets built on Mika Rottenberg’s Studio in Tivoli, NY; at Saugerties Performing Arts Factory in Saugerties, NY; and on locations in Kingston, NY and Williamsburg, Brooklyn.

The story grew out of a weekly conversation between friends and collaborators Mika Rottenberg & Mahyad Tousi during the early days of lockdown in 2020 about how people around the world were physically isolated and yet still able to connect through technology. By late 2020, a script was borne out of those conversations.

ABOUT THE DIRECTORS
Argentina-born, New York-based artist Mika Rottenberg is devoted to a rigorous practice that combines film, architectural installation, and sculpture to explore ideas of labor and the production of value in our contemporary hyper-capitalist world.

Using traditions of both cinema and sculpture, she seeks out locations around the world where specific systems of production and commerce are in place, such as a pearl factory in China, and a Calexico border town. Through the editing process, and with footage from sets built in her studio, Rottenberg connects seemingly disparate places and things to create elaborate and subversive visual narratives. By weaving fact and fiction together, she highlights the inherent beauty and absurdity of our contemporary existence.

Each of Rottenberg’s video works is situated within a theatrical installation, made up of objects from the lush and bizarre parallel worlds in her videos. Sacks of pearls, deflated pool toys, plastic flowers and sizzling frying pans seem to open a portal into the realm of the work. Her multi-dimensional film projects are often accompanied by standalone sculptural works, connected by allegory.

Born in Buenos Aires in 1976, Rottenberg spent her formative years in Israel then moved to the US where she earned her BA from the School of Visual Arts in New York and followed this with an MFA at Columbia in 2004.

A solo exhibition of Rottenberg’s work is currently on view at the Musée d’Art Contemporain de Montréal (21 May – 9 October 2022). Recent presentations include the Louisiana Museum in Humlebæk, Denmark (2021); and ‘Easy Pieces,’ presented at the New Museum in New York, the Museum of Contemporary Art in Chicago, and Museum of Contemporary Art in Toronto (2019 – 2020). Rottenberg was the recipient of the 2019 Kurt Schwitters Prize, which recognizes artists who have made a significant contribution to the field of contemporary art. In 2018, she was the winner of the Smithsonian American Art Museum’s James Dicke Contemporary Artist Prize, which recognizes an artist younger than 50 who has produced a significant body of work and consistently demonstrates exceptional creativity.

Mahyad Tousi is a multidisciplinary writer, producer, cinematographer, and director working across story formats, genres, and platforms; his projects span network television to the modern art world. He was the executive producer of CBS primetime comedy UNITED STATES OF AL. He is currently writing and producing 1001, a sci-fi adaptation of THE TALES FROM A THOUSAND AND ONE NIGHTS, and co-directing REMOTE, a film created with his long-time collaborator and renowned video artist Mika Rottenberg.

Tousi is also the co-founder of BoomGen Studios, a creative IP incubator working across storytelling traditions and formats for the last sixteen years. He also founded Starfish Accelerator and is a General Partner of Starfish Fund—a 10-year vision for a self-sustaining cultural ecosystem for underrepresented artist-entrepreneurs. The Accelerator, which grants artists of color funding and mentorship to scale big pop culture ideas, will re-open for applications in Spring 2022.

Tousi sits on the advisory board of MIT’s CENTER FOR ADVANCED VIRTUALITY and speaks on the “critical impact of popular culture” in shaping our shared future.