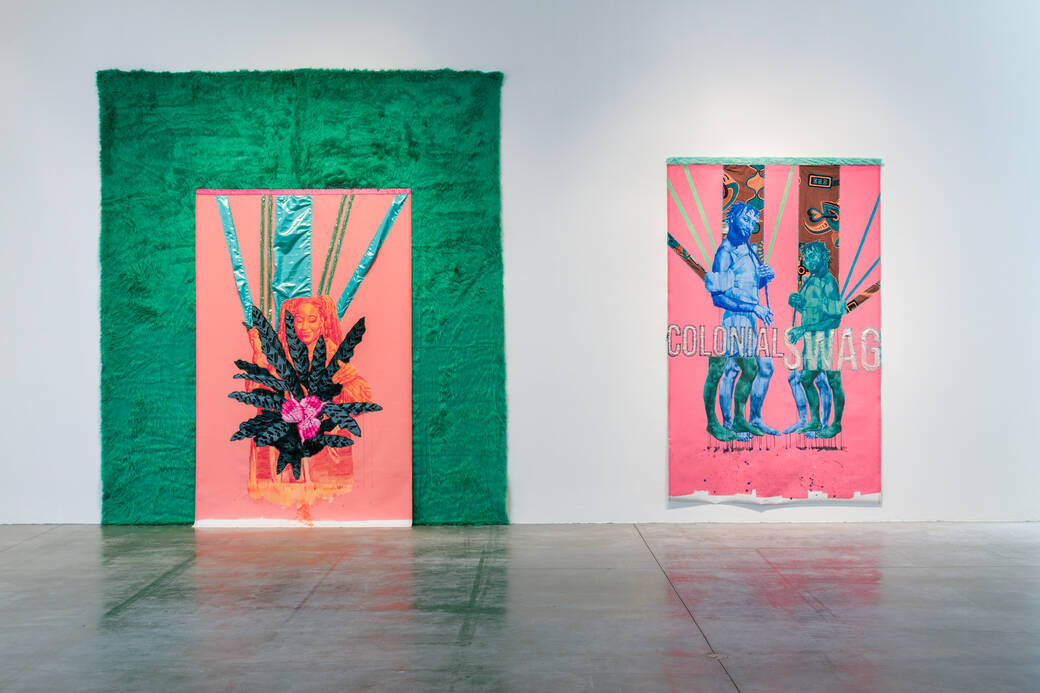 Cantos of the Sibylline Sisterhood

Cantos features works that navigate a means out of, or parallel to, the many iterations of marginalized identities that are part of our history, present and future. The ArtCenter College of Design exhibition represents a wide spectrum of established and emerging artists engaged in building new and experimental narratives: April Bey, Chitra Ganesh, Lezley Saar, Erica Ryan Stallones, Molly Surazhsky, Mariko Mori, Mai-Thu Perret, Marnie Weber, Saya Woolfalk and The Revolution School.

Based on the premise of sibyls, women throughout history known to foretell the future, the featured artists in many ways are cultural sibyls. Their reimagination of marginalized identities as central and empowered have the potential to impact future cultural conditions. Presenting feminist, queer and trans artists whose work explores boundaries of power and identity, this exhibition aims to create, and often simultaneously critique, new realities. The artists in Cantos of the Sibylline Sisterhood eschew binary, oppositional positions for fluctuating and situational platforms that allow for slippages, unfixed expressions and alternate meanings.

The exhibition was curated by Julie Joyce, director of ArtCenter Galleries, and Christina Valentine, curator of Exhibitions. Cantos of the Sibylline Sisterhood is made possible through a generous grant from the Pasadena Art Alliance.

April Bey. Through an Afrofuturist lens, the Bahamian-American artist April Bey reflects on subjects such as queerness, feminism and internet culture in her installation and textile works. Positioning herself as an extraterrestrial from the planet Atlantica, Bey’s mission on Earth is to observe and report as an undercover agent. By privileging the observations of the Other as a primary narrative, Bey subverts dominant cultural norms and centers the perspective of the alien and outsider as an authoritative voice.

Chitra Ganesh. Referencing spiritual traditions is a primary endeavor for Brooklyn-based artist Chitra Ganesh, who applies the iconography of mythology to popular culture and illuminates feminist and queer narratives. Drawing from Hindu religious texts, science fiction and queer theory, her digital and hand-crafted animations include a series of comic book dramas that replace misogynistic tales with bold female characters, thereby exposing the subtexts of violence and subjugation embodied in the original stories.

Lezley Saar. Los Angeles-based artist Lezley Saar cites history but speaks to intersectional identities of the present. Saar’s personages in the form of paintings, sculpture and installations reveal the mutability of identity with allusions to the future and the past via gods, spirits and other beings.

Erica Ryan Stallones. Los Angeles-based artist and an educator, Erica Ryan Stallones is primarily a painter and organizes her ideas around systems built to understand, construct and de-construct a variety of universal symbols, from the numbers one through four, to the cardinal directions and the planets.

Mai-Thu Perret. Swiss artist Mai-Thu Perret’s sculptures, ceramic works, performances, and texts exist at the intersection of contemporary culture, art historical insight and visceral materiality. Perret explores and generates feminist narratives and counter-narratives that cast the role of the art object in a new light, introducing utilitarian, symbolic and even mystical possibilities in contexts that are often limited to formalist readings.

Mariko Mori. Based in London, New York and Tokyo, Mariko Mori creates new worlds with an eye to materiality, light, the body and technology. Challenging the boundaries of sculpture, Mori works at intimate and expansive scales alike in order to consider embodiment in all its forms.

Saya Woolfalk. On the edge of the extraordinary is the work of New York-based artist Saya Woolfalk, who has devoted her practice to the invention of a fictional utopian universe that combines science fiction, fantasy and cultural anthropology. Herein live what she has deemed the Empathics—a fictional race of women who metamorphose into tech-savvy, plant-human hybrids.