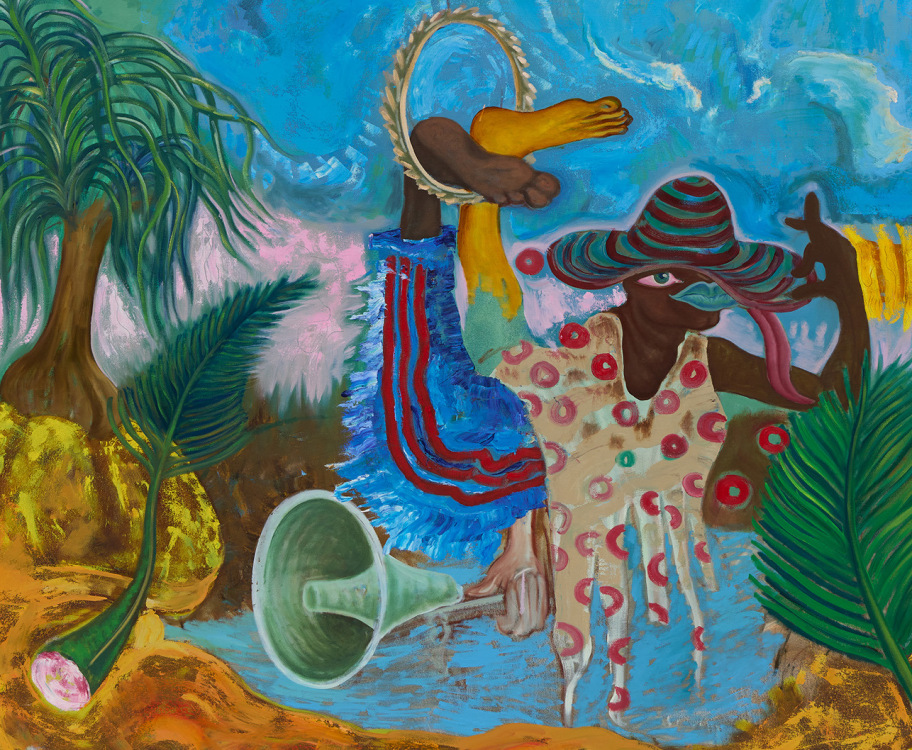 Simphiwe Ndzube: Isithunywa so Moya | A Messenger of the Spirit

Nicodim Gallery
1700 S Santa Fe Avenue, #160, Los Angeles 90021
Oct 15, 6 PM - 8 PM — ends Dec 03, 2022
In Isithunywa so Moya, Simphiwe Ndzube’s fifth solo exhibition with Nicodim, Isithunywa are mystical beings that serve as messengers and mediators between the physical and spiritual realms. This body of work casts the artist’s inspiration as Isithunywa, forces he harnesses to pull his practice to new frontiers with his hands, eyes, and heart as vessels. The characters he channels find themselves in varying states of transition: in Gxarha River – 1856, 2022, a faulty Xhosa prophetess has a vision that she believes will lead her people to freedom, but instead brings famine and death; in The Swing, 2022, an owl rocks a clownish figure from a trapeze, dangling him above a body of water either in good humor or as torturee for some crime committed; The Great Mother, 2022, lights a candle, chasing the night away.

Ndzube’s personal Isithunywa have led his practice in new directions as well. While the bodies that populate his canvases and sculpture are clearly related to those from prior series, their flesh and blood are divined from oil paints and ceramics, both firsts for the artist. The new mediums are mediums themselves, bringing a vivid ruddiness to the artist’s unique methods of transposing narrative and allegory.

Says Ndzube: “For me, channeling artworks is an intuitive process, an openness to travel through unknown and often dark places to bring about new lives and stories. The lives within the work are not creations of mine—they are willed to existence by forces beyond my control. I don’t question the souls I’m told to create. They come from a higher power, an inner consciousness, or a combination of the two. Artmaking, for me, is like the work of a Sangoma, or healer, who finds beauty in the macabre, clarity in chaos, answers in questions, and questions in answers.”
Tweet
Share