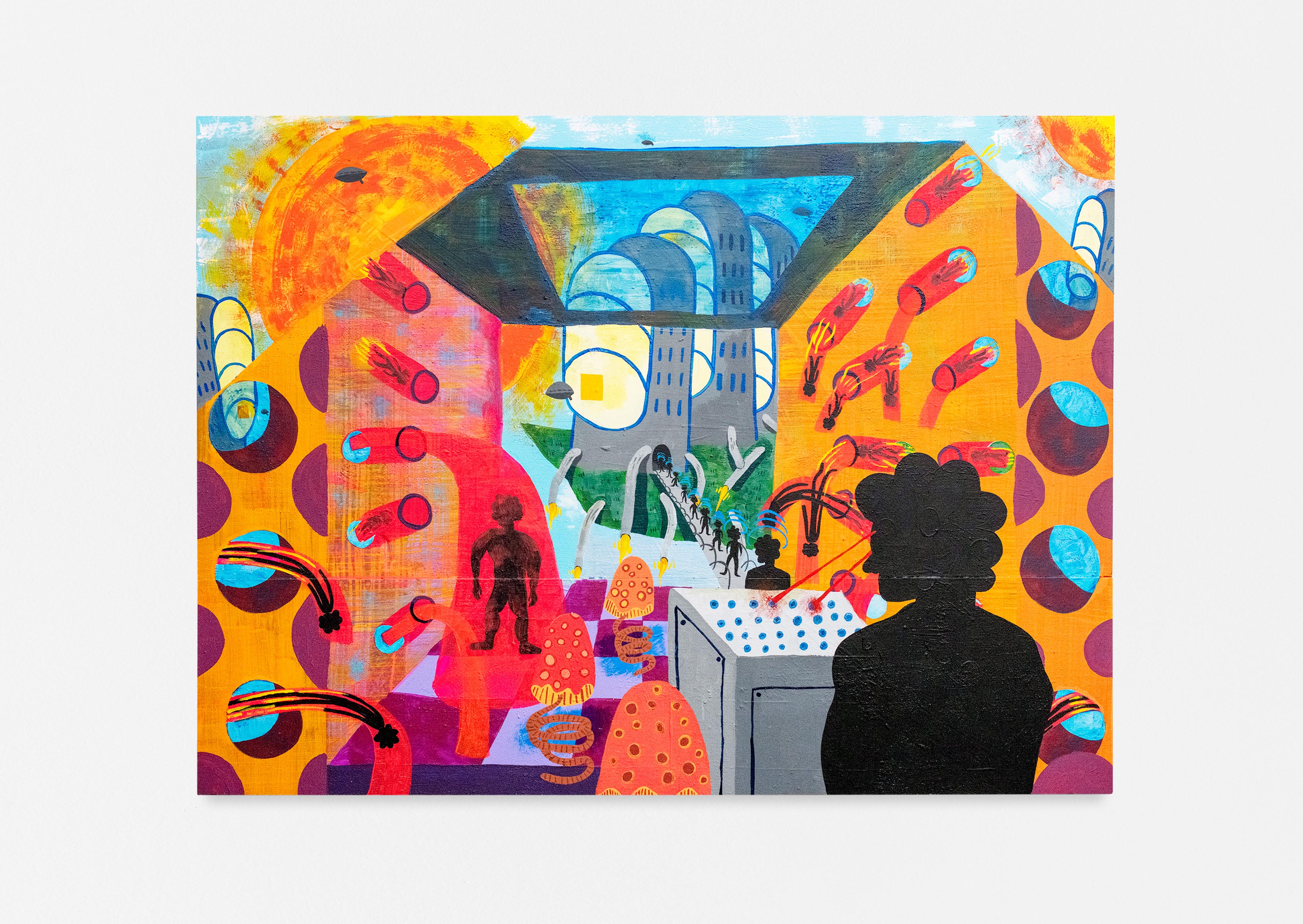 Azikiwe Mohammed: Solitudinal Arrivals | Alex McQuilkin: Use What You Have To Make What You Need

de boer (Los Angeles) is pleased to present Solitudinal Arrivals, a solo exhibition by New York based Azikiwe Mohammed. Mohammed presents a suite of new paintings and a neon sculpture for his first solo exhibition in Los Angeles. In addition, Mohammed transforms the gallery by covering the walls in pink velvet curtains. A primary concern of Mohammed’s work which includes painting, photography, sculpture, performance and found ephemera — is rooted in themes of Black place-making. Interested in constructing spaces of safety and welcome for people of color and for immigrants whose space is often threatened, Mohammed—who self-identifies not as an artist, but as a “dude who makes stuff”—often makes temporary homes and physical spaces for Black people.

The exhibition asks, if solitude is an action then what takes place in its absence? How much of someone's form can you hear if it's not tethered to the ground? With gravity being a suggestion for those who can afford it, how do terrestrial concerns extend to those who have no choice but to arrive in silence and to exist in solitude? With the new suite of works in Solitudinal Arrivals, Azikiwe Mohammed thinks around sites in which we have existed, will continue to exist and the locations that have given space to do so, both material and immaterial at once.

The exhibition is an accompaniment to the artist's upcoming collaborative two person exhibition at the California African American Museum that opens at the end of October.

ABOUT AZIKIWE MOHAMMED
Azikiwe Mohammed is known for designing places to relax, environments where a shared language is spoken, or sometimes places where new languages can be created. His exhibitions turn galleries into homey spaces intended to put all visitors at ease. Using art to invoke community uplift is also key to his practice, exemplified by his recently launched Black Painters Academy, offering free classes and mutual aid in lower Manhattan and the New Davonhaime Food Bank, a non-location-based food bank serving as wide a variety of communities and spaces as possible through redirecting monies for the arts into monies for food.

de boer (Los Angeles) is pleased to present Use What You Have To Make What You Need, a solo exhibition by Alex McQuilkin. This is McQuilkin’s second exhibition with the gallery. For this exhibition, McQuilkin utilizes dyed birdseye fabric that she hand embroiders with sentences pulled from Sol Lewitt's ‘Sentences on Conceptual Art’ (Artforum, June 1967) which are framed in bespoke color matched frames that reference traditional small scale needlepoints and their hoops. The soft pastel hues and birdseye fabric which McQuilkin hand dyes, is also known for its utilitarian purpose as cloth diapers. This process presents an aesthetic that unifies the experiences of artistic pursuits with motherhood, loss, and intimacy.

McQuilkin’s subversive tactics bring to mind the work of Mary Kelly, Louise Bourgeois, and Senga Nengudi. By applying a rationalist, language-based approach to feminism and psychoanalysis, McQuilkin legitimizes a mothers experiences as a subject for art. Having recently given birth to her second child, McQuilkin’s needlepoints co-opt both the aesthetics and materials of motherhood as well as Lewitt’s privileged guidelines for making conceptual art. Subverting the aesthetics of conceptual art and using Lewitt’s text as critique on societal mansplaining, McQuilkin compellingly complicates the dynamics of postpartum where intimacy and separation collide.

McQuilkin writes: "It seemed like the natural thing to do to combine physical labor (handiwork, embroidery, "women's work") on diaper cloth (more labor, more women's work) with the headiest thinking about art and ideas which I am sincerely drawn to but can never quite separate myself enough from the physicality of life to fully wrap my head around. The ridiculousness of this combination- these things I usually keep totally separate and compartmentalized- seemed to beg the scale and goofiness of these non-utilitarian oversized "hoops". Honestly it all seemed kind of obvious to the point of being basic. But thinking back to Sol Lewitt's letter to the editor regarding his sentences: ““Most ideas that are successful are ludicrously simple. Successful ideas generally have the appearance of simplicity because they seem inevitable.””

Alex McQuilkin combines psychoanalysis, maudlin sentimentality, dark humor, and deep sincerity in her videos, drawings, objects, and installations, through which she explores the construction of female identity in Western culture. McQuilkin’s work has been exhibited internationally since 2000. Her paintings, drawings, videos and sculptures explore themes such as the role of cultural aesthetics in defining female identity and the power structures embedded within artifice.