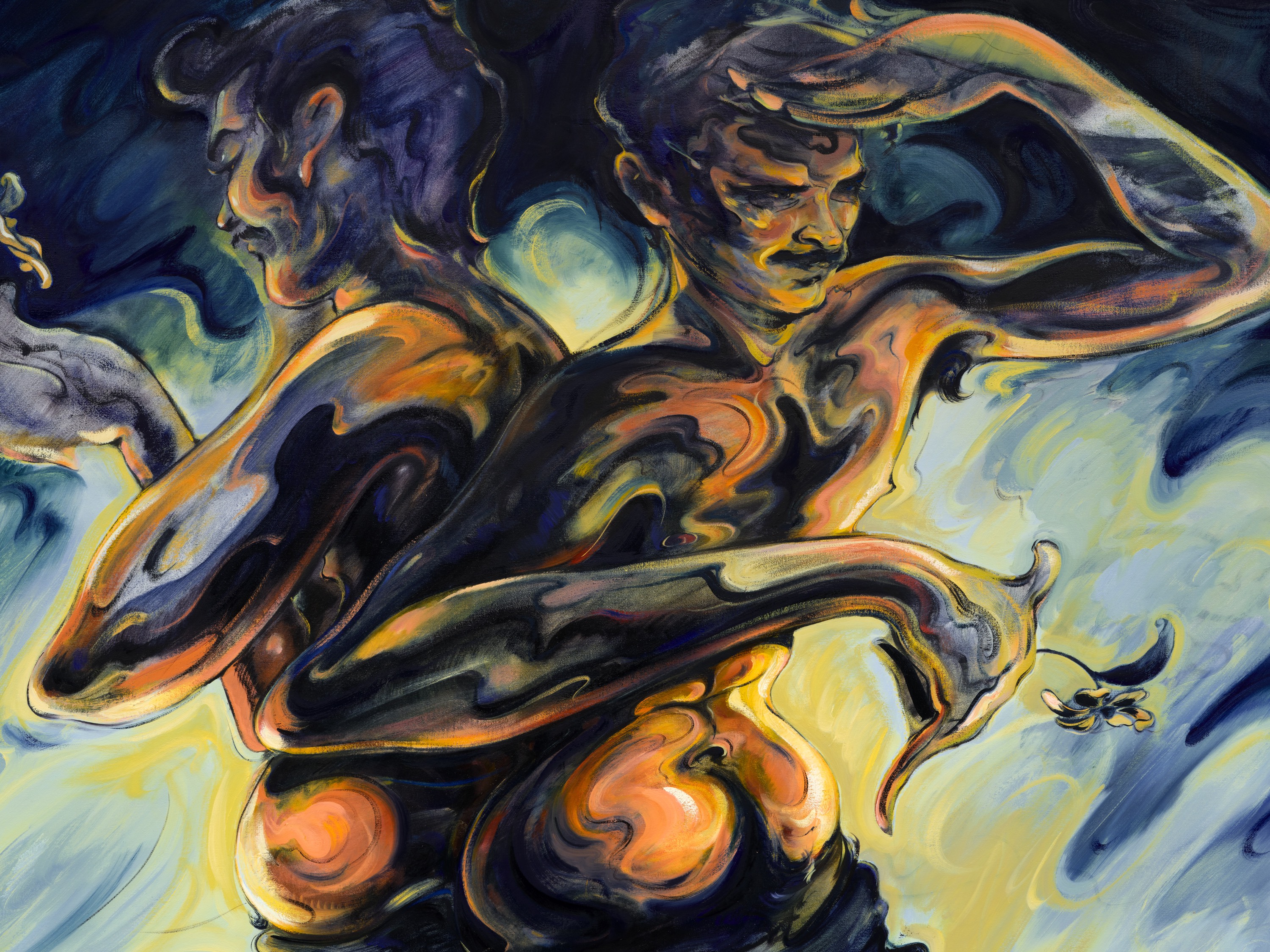 Gabe Cortese’s paintings reflect worlds built around queer narratives that explore yearning and affection through a lens of comedy and drama. He frequently incorporates familiar compositions found throughout art history, particularly religious paintings from the Renaissance and Mannerist periods. Cortese subverts the motifs found during those periods, like The Dead Christ or The Adoration of Christ, by using those themes to develop narratives around queerness, sexuality, and relationships. The figures found in Cortese’s paintings are an amalgamation of aspects of his and his partner’s bodies, using this avatar to investigate the themes found within his works.

Nothing Good Happens at Night follows the relationship between a protagonist and a delicate flower from golden hour, through the night and finally to early dawn. The protagonist’s large, elegant body is at odds with the tiny flower as he grapples with their dynamic; he can’t help his clumsy and often brutish ways. Throughout the series, he moves through his emotions on an operatic scale from anguish to giddiness to seduction. The daisy, ever present, remains constant and indifferent to the protagonist's overtures. While the man runs through a range of emotions the daisy stays upright and perky. The protagonist's bold gestures take shape with Cortese’s swift, powerful lines. The figure is resplendent with curved spines, springy toes, deft fingers, and a wide, open chest that exaggerates his emotions. The elongated form, reminiscent of those in Mannerist paintings, is ensconced by blooming clouds within a world of shadowy yellow, purple, and orange tones casting a mystical aura. Using familiar archetypes like the dreamer or tragic hero, Cortese examines the queer, male form with a flamboyant pear-shaped body, strong calves, and soft, pillowy curves. It’s a love note to a beautiful and authentic body freed from the aesthetics and idolatry of brawny masculine figures.


Transfiguration of a Daisy is set in the dark depths of night, but in the eyes of our protagonist, the daisy magically transforms, a metamorphosis cast in warm yellow light. His serpentine body curves around the flower as his head is flung back in ecstasy. In Crier, the protagonist is sprawled flat on the ground, in agony and utter despair while the daisy waits patiently at his side. His hands are placed over his weeping face, but we shouldn’t take his suffering too seriously, the figure's body gives away his inner excitement, unable to conceal his secrets. Death of a Daisy is filled with tangerine orange as sunrise gathers around them. The daisy now limp with its petals falling off – it journeyed through the night but did not survive. The daisy appears three times in the painting with Cortese’s use of repetition to illustrate the shifting of movement and passing, which he uses throughout the works to activate moments of the body. Meanwhile, the protagonist isn’t distraught like he was earlier in the evening, instead he covers his face and pushes himself away, ashamed at what has happened to this helpless flower. Together, these works expertly show the spectrum of the relationship between the protagonist and the daisy, an allegory for how unrequited love is universally suffered. Cortese’s paintings revel in the drama of gesture, line, and color to create a world where the protagonist lives through a spectrum of shameful flirtation and unashamed ecstasy.