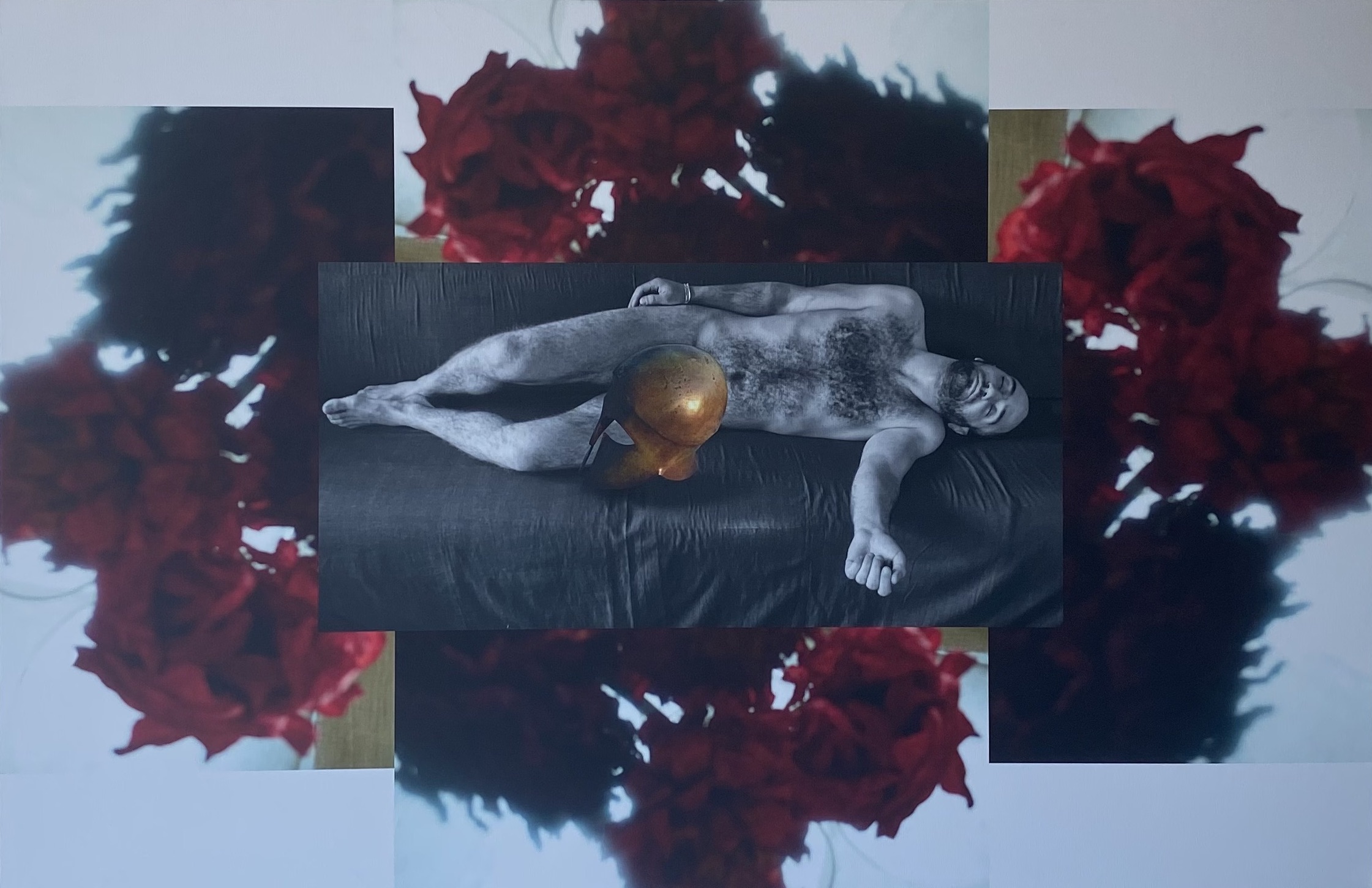 Hamzianpour & Kia ✨
5225 Wilshire Blvd #212, Los Angeles, CA 90036
Oct 29, 4 PM - 8 PM — ends Nov 26, 2022
Hamzianpour & Kia is pleased to present Minefield Playground, a two-person show by
Fereydoun Ave and Sam Samiee, on view October 29 - November 26, 2022. This is the first
joint exhibition for the two artists. The show consists of two series by Ave - Warrior’s Rest and
Two Alphabets - installed by Samiee and in dialogue with the latter’s own site-specific works,
which are created in a short time span in the days before the exhibition opening.
Warrior’s Rest is part of Fereydoun Ave’s ongoing Warrior series, which has continually
problematized the relationship between the warrior archetype and its historical, literary, and
mythological iterations. All along, Ave has rigorously questioned and subverted the
definitions of masculinity embodied by the warrior, cultivating a tense relationship between
the macho characters in the works and the decidedly non-macho elements that surround
them. In Warrior’s Rest, the warriors are once again depicted with iconography that
interrogates the hardness and harshness traditionally associated with masculinity; however,
the overarching sensation here is not one of tension but, as the series’ title suggests, a
restfulness. The warriors are presented in various states of repose, stripped of all forms of
armor (literal and figurative), naked and prone yet fully at rest. Their bodies and the objects
around them – flowers, bedsheets, carpets, plants – exude a soness and sensuality that
goes beyond previous works in the Warrior series. Even the helmet, a powerfully iconic
element of the warrior image, is treated with affection – an ever-present partner whose place
is no longer on the hero’s head and so can no longer mask the warrior’s individual identity or
obscure his humanity. As such, these works constitute an expression of Ave’s wish “that men
will tire of war and from time to time want to rest.” In some instances, Ave goes so far as to
reduce the warrior to a mere shadow, an absent presence, ephemeral and ethereal – nothing
more and nothing less than an idea that materializes briefly and then recedes out of
materiality.

The same interplay of material and immaterial informs the show’s other series by Ave, Two
Alphabets. While alphabets are the material dimension of language – its building blocks, as it
were – Mr. Ave treats them in a way that both acknowledges and vitiates their materiality. The
alphabetical letters are stripped of their primary function (communication) and endowed with
the freedom to PLAY. Crucially, the letters are arranged so as to resist any kind of a reading –
literal or figurative – and empowered to behave independently of any imposed or expected
functionality. As Roland Barthes has said of the work of Cy Twombly (who was in fact, one of
Ave’s mentors), the letters are presented with a kind of indolence, like a garment that has been
worn and deposited on the floor – though Ave’s approach to the alphabet is an indolence born
not of sloth but of a deliberate playfulness, a desire to let their graphic (rather than
iconographic) essence emerge. This allows the two alphabets - Latin and Perso-Arabic - to enter
into a spirited dialogue, emanating an intimacy which foregrounds the fact that they are both
branches of the same (Indo European) language tree.
Ave has oen presented his work in the form of co-operative shows, and for this show he has
called on Sam Samiee to create an installation incorporating both artists’ work. Samiee’s own
work is characterized by a break from the tradition of flat painting and a return to the question
of how artists can represent the three-dimensional world in the space of painting as a metaphor
for a set of ideas. In designing this exhibition, Samiee treats the gallery as an editable space
whose possibilities and limitations can be used, manipulated, and unmade as the artist sees fit.
Samiee considers the work of installation as a performative act; and indeed the entire show
becomes a performance that immerses viewers in the environment, incorporating them as
co-performers in a work whose scale far exceeds the sum of the physical objects present. Using
both two-dimensional media and spatial objects, Samiee amplifies the sense of beauty and
color in Ave’s pieces while simultaneously mediating and altering the gaze that is directed at
those pieces -- pushing viewers to be present to their own presence in the gallery space and to
their own part in creating a discursive relationship with the individual works and with the
exhibit as a whole.
In his work, Samiee endeavors to synthesize the visual culture of the West with the heavily
word-centered culture of the East; his approach is grounded in part in his research and lectures
on Iranian art history and the ways in which Iranian modernists reconciled the new canons of
Western art with their local frameworks of art production That research has brought him to
contemplate and find insight into the role of Fereydoun Ave within Iranian art history and his
contribution to the evolution of Global Modernism -- a subject which Samiee further engages
with and elucidates in this show. In addition, Samiee highlights how Ave’s work celebrates the
fascination with male beauty, referencing in particular the Greek notions of the masculine ideal
while at the same time pointing out an ugliness behind the machismo of war and destruction –
intensifying the poetic aspects of awe and dejection one finds in masculinity and its attendant
beauty.

In Ave’s pieces, images are conjoined to create scenographic essays; and so Samiee’s work
here can be read as a scenography of scenographies, hinting at a fractal relationship between
the two artists and their work. In this way Samiee ramps up the playfulness and evades what he
calls “the mine-field of the mind-field” – the temptation for artists to think too much about what
parts of the collaborative work are “mine” and what parts are not.
Fereydoun Ave (b. 1945, Tehran) is one of the most influential individuals in Iranian
contemporary art and his prolific efforts cover various formats. He received his BA in Applied
Arts for Theatre from Arizona State University and studied film at New York University. During
his career, which spans over five decades, he has successfully taken many different roles,
including artist, designer, art director, collector, curator, gallerist and art patron. His artworks
have been featured in many solo exhibitions and hundreds of group shows in galleries and
museums all around the world. Ave’s work has been acquired by prestigious art institutions,
including The British Museum in London, The Metropolitan Museum of Art in New York, Los
Angeles County Museum of Art (LACMA), Centre Georges Pompidou in Paris, Cy Twombly
Foundation and Tehran Museum of Contemporary Art (TMOCA) as well as many notable
private collections.
Sam Samiee (b. 1988, Tehran) is a painter, essayist, and psychoanalyst in training who finished
his Rijksakademie residency in 2015 and ArtEZ AKI in 2013. His primary education in arts
began at the University of Arts in Tehran, first in Industrial design and then painting. He is a jury
member of the Dutch Royal Painting Prize from 2020 to 2024 and the Wolvecamp Prize in
2022. Respectively, he was the winner of those prizes in 2016 and 2018. He synthesizes his research on art history, Persian poetry, and psychoanalytic theories into a studio practice that employs painting in multiple registers. He has exhibited his works at the 10th Berlin Biennale, Kunstmuseum, the Parasol unit Foundation, and Manchester Art Gallery.