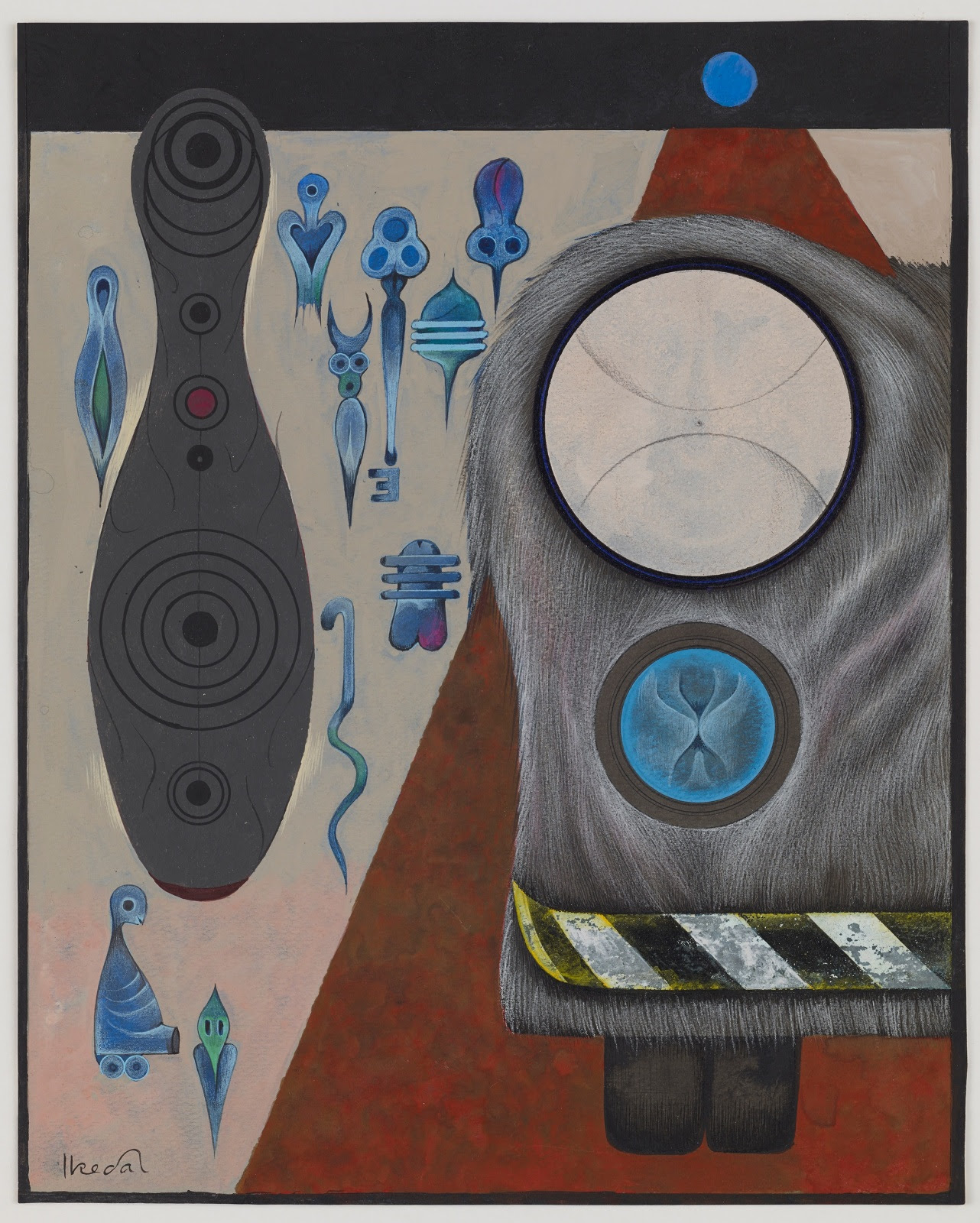 Tatsuo Ikeda (Japan, 1928–2020) was initially trained as a kamikaze pilot, but never saw direct combat before the end of World War II. His experiences in the war and its aftermath stoked his suspicion of authority and his lifelong pacifism. After the war, Ikeda trained as a painter at Tama Art University, Tokyo in the late 1940s. His subsequent output included paintings, drawings, sculptures, publications, and performances. His early interests evolved from post-war political satire to fable-like depictions of animals, both rendered in pen-ga (pen and ink technique). By the early 1960s, Ikeda had become disillusioned by politics, indicated by his Elliptical Space painting series, which depicted various elliptical shapes alluding to space and time, the latter of which he called “the fourth dimension.” In his Toy World series that followed in the late 1960s, in his words, he saw “toys [as] a mere reflection of reality.” His ensuing ‘toy’ forms had a foreboding but functional appearance, as if from a proto-Cronenbergian vision. In surveying the totality of Ikeda’s series, especially those of his later period, one finds an erotic ethos running through them: his surface tactility, undulating line work, organic forms in various states of interpenetration, and highly gradiated modeling, lends his work a clinical sensuality.

Michael E. Smith (USA, b. 1977) has made work in situ to Ikeda’s works on view. Having came of age in the stark post-industrial landscape of Detroit, Smith is renown for the spare and exacting methods by which he installs his enigmatic sculptures. They are frequently composed of heterogenous components, or exist as manipulated found objects. Clothing, furniture, disembodied machine parts, appliances, kitchen and industrial implements, and dried animal carcasses are recurring materials in Smith’s repertoire. No matter their scale, they occupy a prodigious amount of psychically charged space, installed in complete concert with the architecture of the gallery. The means by which they can be interpreted and felt are fugitive, changing with their installed context. They absorb what is in the room, inch by inch, existing in a melancholic register. This affect strips off their semantic and semiotic dimensions like paint, estranging their appearances––even when they are starkly familiar or caustically humorous.

It is in this spirit––of mutual reinforcement and estrangement––that we pair Ikeda and Smith together. We hope to provoke potentialities that are otherwise undetected in each artist’s work––a dialogue between the natural creative outcomes of two distinct post-conditions.