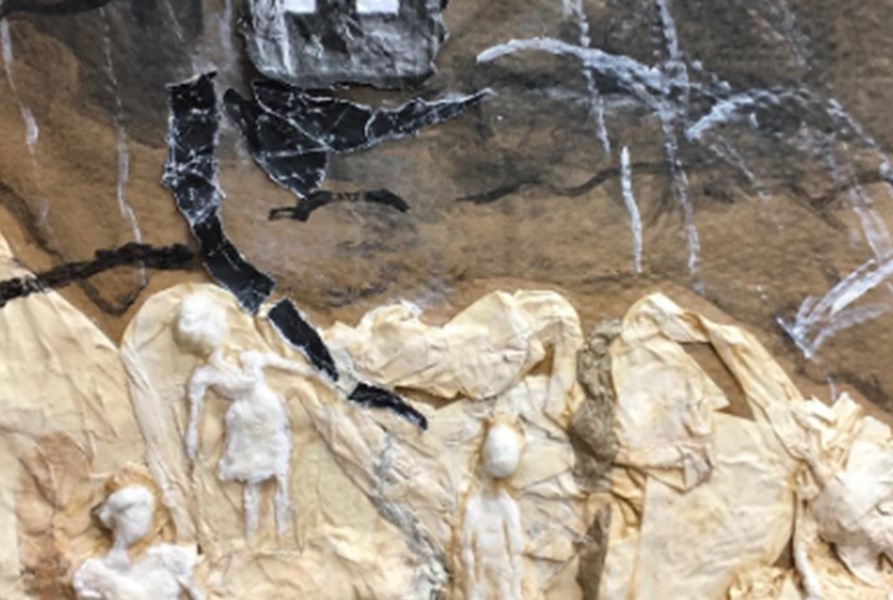 Matter Studio Gallery
5080 W. Pico Blvd. LA, CA 90019
Nov 13, 4 PM - 8 PM — ends Dec 11, 2022
Malka Nedivi’s Transcending Matter is the visually articulated story of reclaiming lost family history and healing for herself and her ancestors. It is an artist’s response to immense life challenges of generational trauma, coupled with immigration’s loss of grounding, and complicated familial relationships.
Nedivi began creating large sculptures and collage paintings following the death of her mother in 2002. These works explore the emotional connection she had with her parents - both survivors of the Holocaust. Born in the newly established State of Israel after her parents immigrated from Poland, Nedivi was raised in a family without ancestral mooring-where none of their history was discussed and remains largely unknown. Artmaking became her method for filling the gaps created by their lack of familial past.

“Everything that I use is old. I am giving the materials new life.” is how she describes the mixed media ingredients of her work. In repurposing discarded materials, she reclaims and restores diminished significance. Her resulting collaged figures combine Figurative Expressionism with the directness and accessibility of folk art. Nedivi’s process consists of layering and molding fabric, paper, and other mixed media in a way that is reminiscent of how her mother collected materials, perpetually patching and mending holes in worn garments. She sees her art as her way of mending the holes in her own life.
An opening reception will be held on Nov. 13 from 4-8 pm. The gallery will host an artist talk on Dec 4, 2-5pm where the artist will present a performance excerpt from her upcoming one-woman show “A Story About Shoes” at 3pm. A closing reception is scheduled for Sunday, December 11 from 2-5 pm.
Malka Nedivi is a multi-disciplinary artist living and working in Los Angeles. She was born in Rehovot, Israel, in 1952, an only child to parents who survived the Holocaust and emigrated from Poland. Studying Theater and Literature at the Hebrew University in Jerusalem, she directed plays and taught theater. In 1980, she moved to Los Angeles, CA, with her husband and son to study film at UCLA, after which she worked as an Assistant Film Editor from 1987-1992.

Malka has an extensive exhibition history including solo shows at BOA Art Gallery and the National Council of Jewish Women in Los Angeles. Malka’s work has been reviewed in publications such as the Huffington Post, Beverly Press, Diversions LA, Filling the Negative Space, and Trebuchet Magazine.
www.malkanedivi.com
Tweet
Share