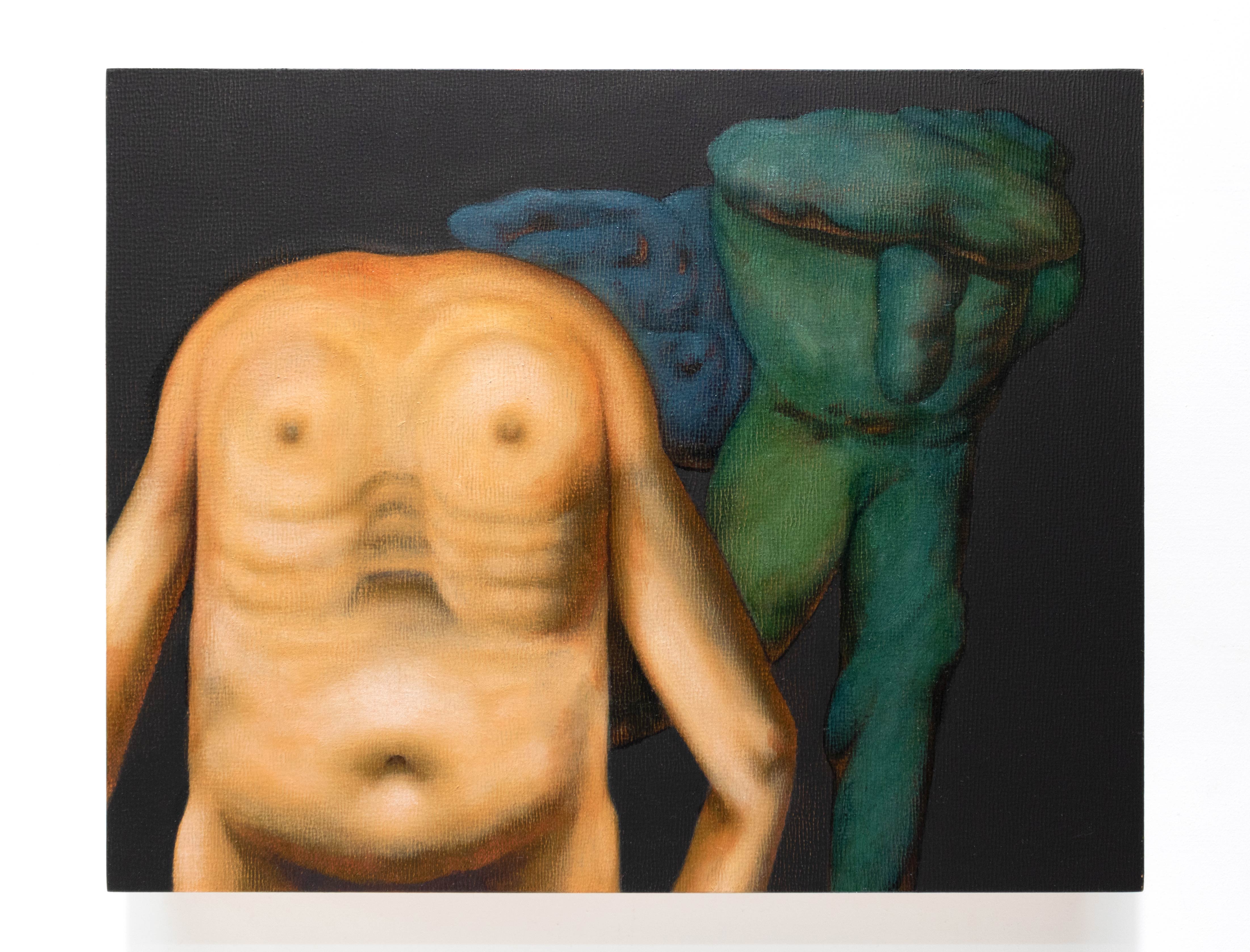 Justin Ortiz’s peculiar cast of tormented subjects endure a haunted, oneiric dimension. He has been gearing up to make this body of work for a long time. In their undeniably gothic rendering, Ortiz's primordial bodies present an extreme past or an extreme future. The fleshy inhabitants of Ortiz’s world appear to be arrested mid-transformation, an implication that they are caught in time’s chokehold without much prospect for a bodily resolution. Therefore, left to toil in darkness, the creatures probe and feel for one another as an otherworldly cycle trudges on.

Through the Renaissance painters, a young Ortiz became accustomed to idealized forms. Without a clear understanding of mythology or biblical references, he was drawn to the formal aspects of mutating figures. His introduction to painters such as Jordaens and Tintoretto exposed Ortiz to alienized bodies through their singular craftsmanship. Furthermore, in examining the history of sculpture he came to understand the dimensionality of figure as well as the interplay of light and form.

Ortiz’s perpetual return to the body as subject is the result of a childhood spent marveling at the great artists of antiquity - his favorite being Rubens. As a teenager, Ortiz was engaged with modern classicism during an apprenticeship until he pivoted to Lyme Academy where the tenets of realism were deeply embedded in the atelier’s program. Anatomy classes further informed his technical acumen as he exacted the scientific makeup of the human form. Ortiz went on to the Art Institute of Chicago where he became attached to the production of a singular humanoid, one bearing two balls and a snout, lacking any clarified identity or narrative.

This figure came to be an internally generated subject - one move by compulsion. In the act of drawing, Ortiz was compelled to return to this figure. A lot of his thinking therefore happens in hindsight. While drawings don’t specifically become paintings, the character recurs as Ortiz rattles off his compositions. Though he could try to shake his subject, this proves futile as something new is always possible within the established framework. Whether this be size or texture, Ortiz confronts problems available for solution. Rigor and consistency of technique become integral to the expansion of his singular subject.

The previous compositions in Ortiz’s oeuvre were largely constructed using monochromatic palettes. Seeing as his methods have been honed in luminous blues and oranges, he’s now introducing new pigments into the paintings. He brings his colors out slowly, while maintaining translucent shadows. In a preparatory initiative, he lays down burnt sienna tones, then grisaille surfaces left to cure. The layering process is crucial to the expansion of colors while harkening back to his cured surfaces in service of a more complex, chromatic painting. One can see an expanded index in Contraption where a sea foam hand strokes a sickly green creature. At the painting’s left edge a peach form clutches the same picklish entity, though with a pronounced authority.

His bizarre, contorting figures emerge out of pure process - Ortiz identifies this mode of production as an ongoing engagement with slippery subjecthood. He’s directly implicated in the open market of ideas, pursuing instinct rather than agenda. Carroll Dunham illustrates this system as resigned to instinct, noting “I didn’t sit down and strategise my way to an image of a sightless humanoid with genitals growing out of its head in a funny hat. It just evolved from things connecting, triggering.”

The masterful lighting in works such as They Toiled is reflective of Ortiz’s concern for historical precedent. One can recognize the painting’s alignment with the language of Rubens’s The Elevation of the Cross or Johann Liss’s The Satyr and the Peasant. Something of an internal glow emanates from Ortiz’s figures, doubling down on the hallmark of sensation. This preoccupation with the grotesque form is a persistent one, not unlike those mutated bodies of the Chicago Imagists.

The perverse subject gets reiterated on end within his landscapes, generated by impulse and an accumulated understanding of form. Co Westerik’s output has become an important reference point, as Ortiz was exploring his own visual language not unlike the consistency maintained by Westerik. The dilution of realism is a common thread between the two artists, as they maintain stylistic conceits rooted in accumulated layers and bizarre figuration. The unconscious remains a central point of departure for Ortiz, just as it had been for Westerik. The Golden Arm is thus a hyperimaginal space in which the viewer must come to terms with surrealism and nature as they exist on the same image planes.