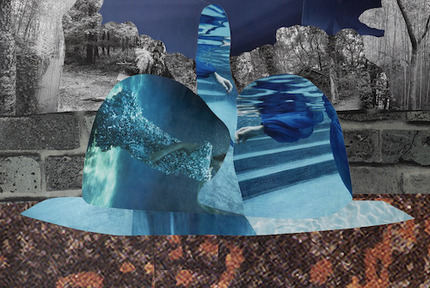 Since the 1980s, Vikky Alexander has utilized sculpture, collage, photography, and video to explore utopian illusions at the nexus of desire, capitalism, and commodification in modern culture. While her earlier work focuses on the idealization of glamor in contemporary advertising and consumer culture, Les Jardins De Versailles sets out to penetrate the fantasy of constructed environments. Expanding upon her fascinations with appropriated imagery, Alexander draws on 18th century architectural engravings of Versailles as the template for her conceptual collages.

Upon entering the exhibition space, the viewer is invited to peer through abstracted, polychromatic portals into the geometric topiaries of the Palace of Versailles. Mounted on aluminum, Alexander’s collages source imagery from advertisements, magazines, origami, shelving paper, and archives of her own photography. The resulting prints incorporate color and black and white in a surprising landscape where abstraction and realism collide. Through the varying textures of tall grasses, woodgrains, photographic pixels, textiles, and color fields, we catch the occasional glimpse of an airplane’s contrail, a parking lot, a model’s hand, a flower market permeating the simulacra, shattering the illusion of virtual tourism to remind us that not all is as it seems.

In the Age of Absolutism, the design of pleasure parks led to major technological developments that allowed for the manipulation of water and soil, vegetation and climate. Throughout the gardens of Versailles, these mechanisms were harnessed to mold and reflect the power, leisure, and romance of elite society. The theatrical staging of Les Jardins De Versailles exudes a juxtaposed air of sterility and wilderness, an homage to the cultural desire for mastery over nature. The process of cropping, enlarging, rearranging, and collaging distinct, yet unplaceable images constructs an animated labyrinth of the luxurious flora and cascading fountains that came to characterize the aristocratic landscape of 18th century France. Alongside the artist’s characteristic photo collages, immersive floor-to-ceiling vinyl murals further serve to transpose the viewer, to the point that we may not know on which side of the smokescreen we stand.

Throughout her body of work, Vikky Alexander explores methods of landscaping the sublime in order to expose the seams that bind our visions of utopia. The exhibition of Les Jardins De Versailles pieces together a puzzle of composite desires, revealing the relationship between banality and luxury, void and folly. Leading us through simulated views of the Baths of Apollo, the Arc de Triomphe, and the Grove of Domes, Alexander brings the viewer into a metaphysical space charged with layers of artifice to confront the playful, albeit sinister performance of paradise.