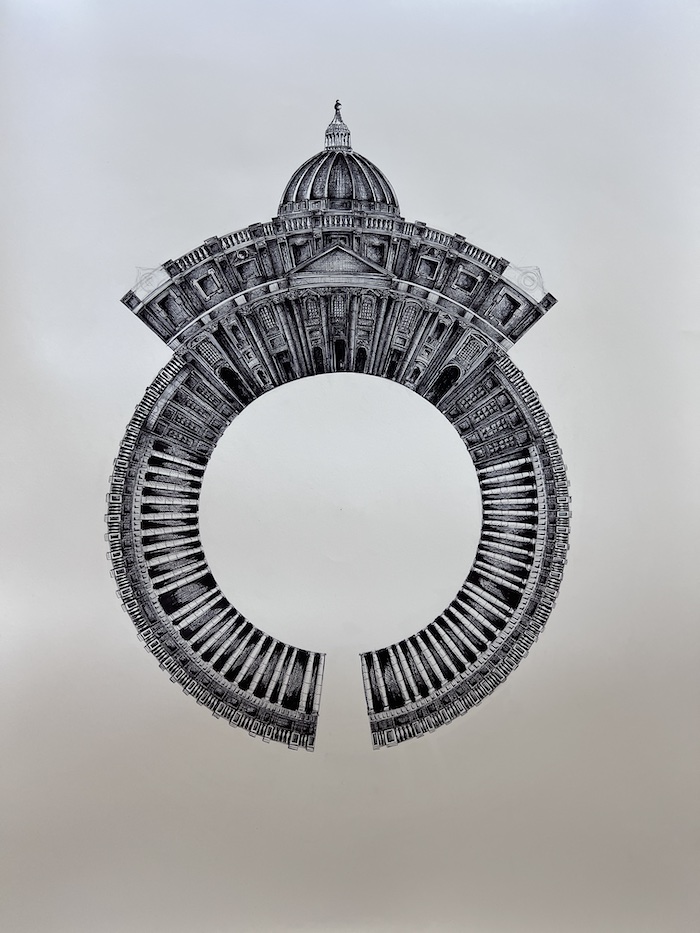 While training as an architect and industrial designer, Omid Majidinejad became interested in the notion of Utopia and the perennial search for the perfect city. Growing up in Isfahan, he was inspired by the city’s central square, the illustrious Naqhsh-e Jahan – a vast public-private complex that covers nearly a million square feet and includes a palace, two mosques and a bazaar. He saw this square and its constant flux of people as a microcosmic city in itself, and realized that manifestations of Utopia can and do exist, albeit in a decidedly imperfect state – an idea that became central in his creation of the works on view in this show. In subsequent travels around the western world, Majidinejad encountered many more architectural iterations of the utopian ideal, both in squares such as St. Peter’s, and in public arenas like the Colosseum, and began to further question the concept of structures as expressions of ideas and ideologies.

In his art, Majidinejad reduces the three-dimensional back down to two, boldly ‘collapsing’ iconic buildings and complexes that were conceived (and continue to be construed) as paragons of perfection and embodiments of paradigms both theological and secular. The sanctity and archetypal nature of these structures is disrupted and interrogated by Majidinejad’s practice of transposing architectural elements not only across buildings but across styles, eras, and cultures. In bringing quintessential components of Gothic church to a Romanesque mosque and vice-versa, for example, Majidinejad underlines both the affinities and the disparities that characterize the two styles and their socio-religious origins – and in the process creates a language that is at the same time anomalous and familiar. The resultant disorientation prompts the viewer to examine their own liminal preconceptions about the inviolability of borders and definitions.

Using the now-archaic medium of freehand drawing, Majidinejad is meticulous in his rendering of details and minutiae. Yet the technique itself further undermines the platonic idealism of his subjects as well as their status as monuments. The direct presence of Majidinejad’s hand and the pressure it deliberately and crucially exerts at each point as the ink is transferred to paper testifies to both the ultimate indispensability of the human ‘hand’ in the process of creation, and its fallibility.

With the recent events in his native Iran, Majidinejad has added yet another dimension to his conception of utopia -- the prospect of a city that is governed and guarded by women, albeit without weapons. As a literalization of this idea, he has incorporated elements of the female body into the drawings, seamlessly blending them with the architectural details. This amalgam of the structural and the physiological challenges expected hierarchies, disposes with scale and creates an unsettling effect that echoes the Surrealism of Magritte and Duchamp. Furthermore, the introduction of the yonic into the often phallic lexicon of classical architecture becomes an act of political disruption rather than one of sexual fixation. Majidinejad’s utopia morphs into a space within which women are central and integral to the fabric and construct of society.

The rhythmic recurrence of components and details in some of Majidinejad’s pieces places him in discourse with a tradition of Iranian Modern artists who have used repetition of visual motifs in their work to create a sense of abstraction – an approach favored in particular by artists of the Saqqakhaneh school, like Hossein Zenderoudi & Massoud Arabshahi, as well as more contemporary artists like Shirazeh Hoshiari.

Another source of inspiration of Majidinejad’s work are the mytho-historical stories that pervade the Iranian culture. In particular, the recurrent use of circular elements in the symbology of these stories (the wheel of the sky, the compass of time, etc) prompted him to recognize the circle as the most powerful and most dynamic of geometric forms. In his work, Majidinejad mines the power of the circle as a symbol of perfection, one in which there is no beginning or end, and where all points are equally connected to the center. In a sense the circle is the most utopic of shapes; yet in Majidinejad’s work that power is subverted by the fact that his circles are produced not mechanically but manually. The inevitable imperfection of the hand-drawn circle further reinforces Majidinejad’s emphasis on the tension that exists between the real and the ideal - a subject that has inspired and occupied artists across history.

Omid Majidinejad (b.1981, Isfahan) is an Iranian-American artist based in Los Angeles. He holds a BA in Industrial Design from Art and Architecture University and an MFA in Interior Architecture + Design from the Academy of Art, and has honed his architectural design skills over many years. Through his art, Omid envisions impractical urban landscapes to inspire social improvement and awareness. Utopian imagery is distorted and viewed through an architectural lens that creates a surreal culture full of detail and imagination.
Tweet
Share