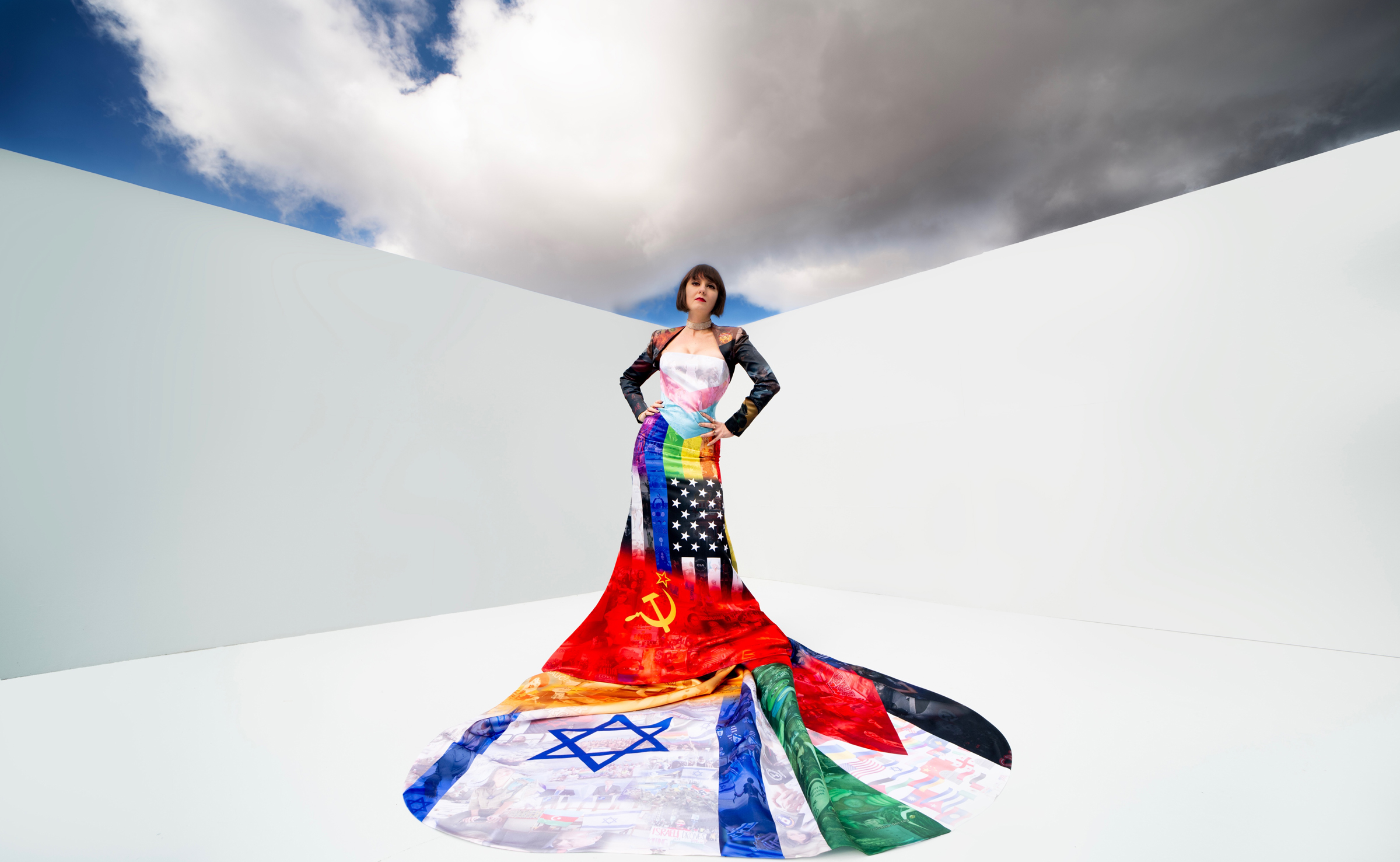 In the large-scale work Dermokratizatsiya (Shitocracy), 2022, Surazhsky investigates the ramifications of attempting to convert a communist regime into a democracy and America’s involvement in Russian politics after the fall of the U.S.S.R. At over 10 feet in height, and comprised of digitally printed sections of satin with organza ribbons melting off the surface in the shape of the American flag, the work harkens back to the 1990s. In the upper corner of the flag, where the stars represent the fifty states, Surazhsky has inserted TIME magazine’s July 15, 1996 cover documenting the United States’ intervention in the election of Boris Yeltsin, Russia’s first “democratically” elected president. Below, under the cascade of red, white, and blue ribbons, images of Russia’s first McDonald’s being mobbed by customers, a family photo of the artist and her family posing in front of an image of Bill Clinton displayed on a storefront in Kharkov*, Ukraine, and cartoons of the hammer and sickle are included with other images referencing the political upheaval of the era. The title of the work, Dermokratizatsiya, is post-Soviet Russian slang that translates as shitocracy.

Central to the exhibition is Slava Culture War!, 2022 a gown that is displayed on a life-size model of the artist. On view in the upstairs gallery, the over 40-foot train of the gown cascades through both of the gallery’s exhibition spaces flowing into the downstairs space and hung like a tapestry from the 17-foot ceiling. The gown displays numerous references including flags from the Soviet Union, USA, Israel, Palestine, Ukraine, the Pride flag, a Blue Lives Matter flag, and the flag of the Central Intelligence Agency, amongst others. A portion of Mark Fisher’s infamous essay, “Exiting the Vampire Castle” is printed onto the gown’s train complete with sections that the artist highlighted. The train ends with an image of Surazhsky reenacting the infamous photoshopped image of Sarah Palin wearing an American flag bikini while hoisting a riffle. Digitally collaged throughout the gown are images of various symbols, cultural and political figures, and moments that have been disseminated and refracted through the media and internet. Depictions of a young Israeli woman wearing her army uniform, Jeff Bezos posing before his space launch, Jesus wearing a MAGA hat, Michelle Obama hugging George W. Bush, Pepe the Frog, and Dr. Evil’s lair are all pulled from a never-ending bank of information to be both dissected and forgotten.

With Freudian Slip, 2022, Surazhsky appears in a bondage-style costume while pulling back a red curtain to reveal a plethora of social justice-informed sadomasochistic phrases looming over the original architectural model of the California Institute of the Arts as presented by Roy Disney. In this textile work, the artist has photoshopped an image of Doomer Wojak’s face over Disney’s and swapped the book in his hands for a copy of Sigmund Freud’s The Psychopathology of Everyday Life.

Molly Surazhsky (b. Queens, NY, 1992) lives and works in Brooklyn, NY and Los Angeles, CA. A child of Ukrainian émigrés, Molly Surazhsky’s practice is tinged with an inherited post-Soviet cynicism and humor. This underlying attitude emerges in her ongoing studies of the corporatization of working-class lives, a critique of America’s role in international affairs with Russia and the countries in the former U.S.S.R., an acknowledgment of the realities between two opposing political philosophies, capitalism and socialism, and the outcomes when a lack of balance between the two is employed on an economic, social and psychological level. Utilizing sculpture, sound, photography, textile design, and handmade garments, Surazhsky articulates detailed narratives involving themes of hypocrisy, propaganda, class, healthcare, and survival.


*Russian is the language predominantly spoken by the Jewish Ukrainian population and diaspora of the region. Out of respect for the artist’s identity and ethnic background, the English translation of the city—as based on the language of her origin and spoken in her family’s home—is used in this text.