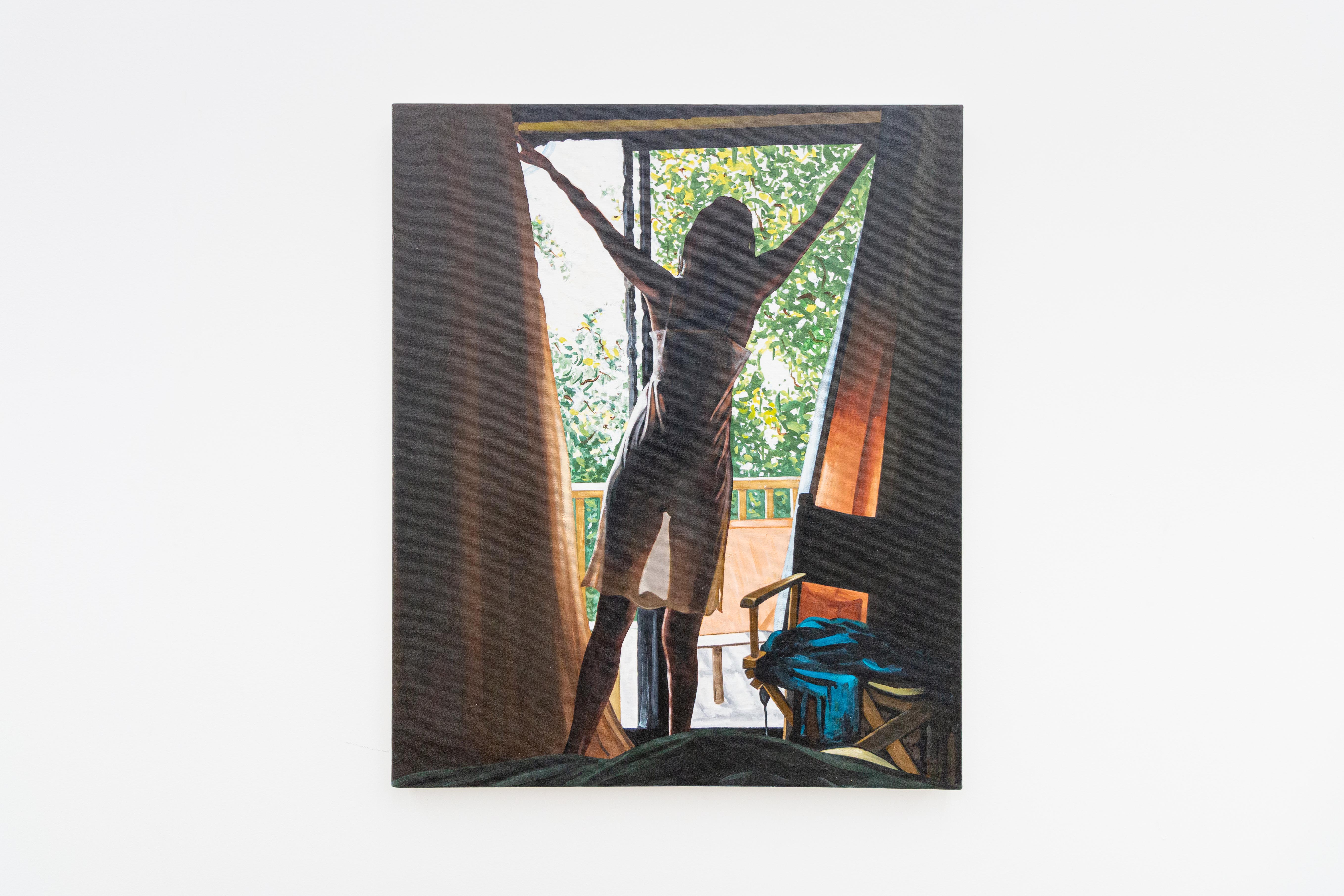 Brad Phillips: I Know What I Did Last Summer | Koen van den Broek: The Coin Toss

de boer (Los Angeles) is pleased to announce a solo exhibition by Brad Phillips. In his second exhibition with de boer, Phillips presents figurative paintings that depict fragments of actual and imagined moments, where narrative oscillates in and out of reality.

Often depicting artist Cristine Brache, Phillips' exercise is complex; it’s complicated, yet effortless and beautiful. In one painting, a scarfed female figure gazes upwards with the Hollywood sign with its reflection on her glasses. In another painting, a knife dangles downward as it hangs from a roll of toilet paper. Another painting depicts an arm smashing through a door that is casually unlocking the door from the other side.

Pop culture, Hollywood icons, and lesser known deep cuts permeate into each picture. Be it the Warner Brothers logo, or the famous director Brian De Palma being referenced in the title of a particularly ominous painting of a couture shoe being used as a doorstop, Phillips’ has an uncanny ability to create pictures that reject labels such as ‘auto-fiction’ and ‘psychological figuration’. Phillips remains steadfast in his humor, earnest sentiment, and misdirection.

Informed by a recent trip to Death Valley, the new works in this exhibition balance a sense of familiarity within gestural mark making. While van den Broek does not consider his work to be within the lines of abstraction, his often close-up and ostensibly out-of-context works can appear as such. As van den Broek states, “Everything I do comes from the world. It’s not something I make up, it comes from details I see that I digest and re-work.” The title of the exhibition “The Coin Toss,” leads viewers to consider the chance encounters in life that can take them down different roads.

With a process that begins with looking at the ground, van den Broek photographs architectural elements; cracks in pavement, curbs, roads, and parts of buildings and architectural debris that make up the modern landscape. With roadscape vantage points, the edges of desolate buildings, crackling roads, and forlorn tractors in the desert the exhibition lends itself to ideas about the passing of time, generational change, and the violence within humanity who claim these spaces.

Forthcoming Monograph
In 2023, a 600 page monograph titled “Out of Place” of van den Broeks paintings will be published by Mer Books which will include a major essay by art historian John C. Welchman. The launch of the monograph will inaugurate exhibitions at KunstMuseum Magdeburg (Germany), and Ludwig Museum Koblenz (Germany) over the next two years. John C. Welchman is Professor of Modern Art History in the Visual Arts Department at the University of California, San Diego. He is the editor of Minor Histories: Statements, Conversations, Proposals, a collection of writings by the artist Mike Kelley (MIT Press).
About Koen van den Broek

Koen van den Broek’s paintings (b. 1973) explore subtle abstract forms embedded in the urban landscape. His work was presented at the 2015 and 2017 Venice Biennales, and in 2008 he collaborated with John Baldessari on a body of work exhibited at the Bonnefanten, Maastricht, and Galerie Greta Meert, Brussels. Van den Broek received his bachelor’s degree in architecture before studying painting at the Royal Academy of Fine Arts Antwerp, the St. Joost School of Art & Design in Breda, the Netherlands, and the Higher Institute of Fine Arts in Flanders, Antwerp. Architecture serves as the primary source of inspiration for Van den Broek. Painting from photographs of cracks in the sidewalk, shadows of buildings and bridges, highway overpasses, and stone curbs taken on his travels in Asia and the United States, he reduces these man-made architectural forms to their essential geometry. Devoid of figures, his canvases nonetheless imply the presence of human intervention.