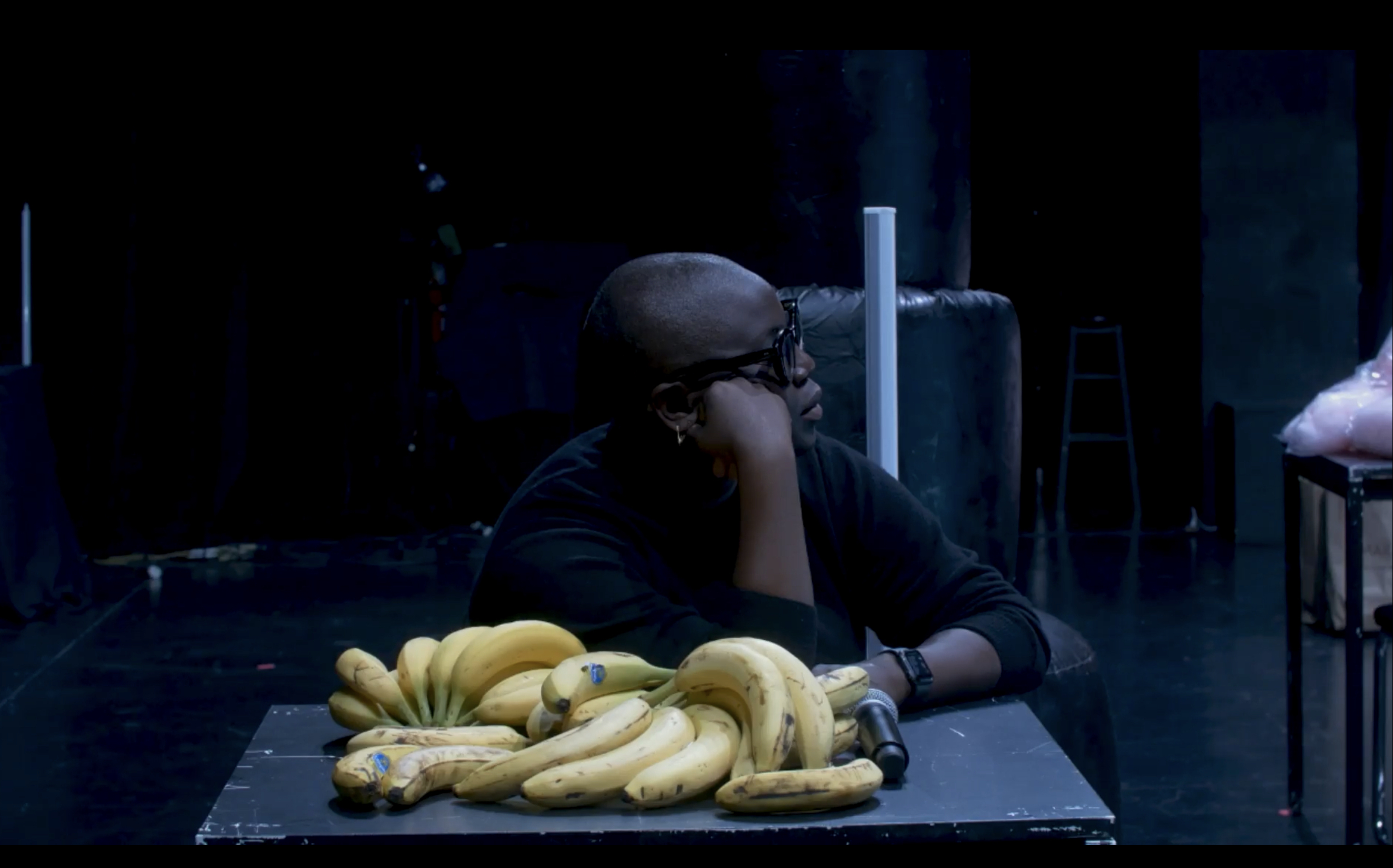 The future perfect will have arrived, curated by Bridget Mullen

For The future perfect will have arrived, Mullen joins together artists working across painting, drawing, photography, collage, sculpture, and performance for their unwavering dedication to pursuing questions over solutions. Regardless of the relative distances between the artists’ ideas, aesthetics, and resulting works of art, the exhibition points to an attentive caring for curiosity mediated through process and the possibilities such faith in inquisition affords.

The future perfect will have arrived

In what world might we hang a portrait not of a loved one but of Earth’s closest asteroid? Bennu, a painting by Sophia Flood, captures our nearest asteroid’s likeness on canvas scrap nestled in plaster nestled in wood. The asteroid Bennu is an amalgamation of planetary material that may or may not hit Earth next century. It is essentially core-less, without its own center, a structure made up only of other structures. With Flood, as with the other artists presented here, there’s a sense that ideas don’t come onto the scene fully formed but are being chased during creation. They’ve each invented their own idea-generating structure that prods an experience wherein even the self is mutable and will be changed.

Flood’s paintings stage cores as held within forms that cradle or ripple in/out. There’s a peeling back of layers—not to expose the inner workings of a subject or reveal some truth, but rather to expose how layers hold and withhold, are seen and unseen. Flood’s forms can be skeletal, floral, or geological as a way of implicating time, tethering her paintings to something tactile and pushing against what could be engulfing abstraction. In Lady, a half-skeleton half-body heat map feels like a fitting subject to be moored within cavernous forms, like some kind of infrared night scene through a window. When I see Flood’s dusk toned paintings made with, I imagine, the slowest of gestures, I consider my own eventual un-layering and think, “Hold this, now hold this, now hold this even longer.”

Lindsay Burke’s paintings and drawings often involve the creation of android-like figures as strategies for catharsis. By making a replica to embody what a feeling looks like on someone else, they can wear the scars, tears, and ruptures functionally so we don’t have to. With these body doubles there’s a hope, perhaps implicit in all art making, that meaning might be revealed. Except by the time you get to what you’ve been waiting for—the event, the completed project—you’ve changed and so the thing you’re looking for has changed. It’s not the same because you aren’t the same. Burke’s work explores the nature of point-of-view and interpretation, but it’s also about personal agency. It has to be futuristic to have a place to live out and sustain the expectations of being a woman, daughter, friend, partner, person. Inventing figures born from pipes, illusionistic and abstract backgrounds, or art history itself, allows for the itchiness of some feelings to exist exquisitely and matter-of-factly in other, less burdened bodies.

In Burke’s paintings, and in many of the works in the show, a structure had to be invented to carry out the work of the subject. For Autumn Knight that structure is time-based. Known for staging absurdist and experimental performances using didactic lesson, talk show, or drama therapy as delivery system, Knight mingles playful, uncertain situations with exploratory movement and cultural references via language. Moments of engagement don’t get carried to typical ends; actions are clipped, flipped, abandoned, or repeated. Nothing is put into a movement that isn’t felt in that moment. Nothing should happen. Nothing is pushed towards a tidy or specific end. Structure to Knight could be riffing off the objects left behind in a space; doing a live zoom performance, giving out her number, and taking calls; toggling between multiple camera points-of-view; or interacting with the audience to engage the race, gender, and power dynamics present. Knight sees that things have always been collapsing around us, but she makes the future feel like a thrill we can alternately rage into and take cozy little naps through.

There’s power in turning things over or inside out, to reconstituting the world through your specific lens, to diffusing power where there shouldn’t be, and embedding power where it should. Kenny Rivero’s paintings have this charge; they work like talismans that carry the visible and invisible aspects of his experience. Rivero creates a lexicon wherein beliefs are suspended in map-like street scenes, iconic superheroes, symbolic letters, and statistics. It feels important that his paintings resist hyper-realness, that what has empowered these works remains fuzzy, half-there, seemingly in a dream state. There’s magic in allowing the feelings that got you there—love, grief, fear, hope, and longing—to propose and instigate a way forward with wit and grace.

Dana Lok’s work often depicts stage sets, platforms, tables, tablecloths, desktops, or grassy grounds on which she can divulge, spread, slice, feast, and suss out the working parts of tangly propositions. Often she incorporates flexible, varied words into the structure of her compositions, pushing language’s relativity. Written language within the intermediary of the two-dimensional plane begs questions and, coupled with the images, creates an index: a structure to parse out the players. In Predictive Knit, something like bruises rubbed into the paper interrupts the precise rendering of irregular stitches. The words “precede” and “follow” in the drawing give it a feeling of interplay and recontextualizes action and reaction—the experience of choice and what feels like the opposite of it. Forms tug at each other, cast nets, overshadow, and bind, generating a much more imaginatively poetic and multidimensional rendering of cause and effect.

Lucas Blalock uses materiality as consistent indicators in his photographic constructions, and I suspect his overall process is purposely varied to change up the results. Through his digital tools of stamping or smudging to create iterations, things can get pushed into comically illogical, exhilaratingly ridiculous, or darkly charming pitches. In Film-Object (Potato), he flips his typical structure of distorting and reconstructing forms in 2D to 3D via a kinetic sculpture—a sluggish zoetrope-type carousel of pictures of a potato on a table. Because something is nameable doesn’t mean its only assignment is language—numbers, dirt, potatoes, or even faces for that matter, can be both pure shape without a guarantee of symbolism, and be chosen for their connotations. The repetition and motion is inherently alluring. It harbors a tension from the looming promise of meaning that doubling down on an original implies.

More than revealing meaning, these works offer suggestions for how to proceed. We cannot be expected to know or encapsulate everything now. Some anti-animation, some ritual, some lesson, some care, some asteroid portrait, some android, some stage, some ghost—these inventions call out the slipperiness of expectation and knowing.