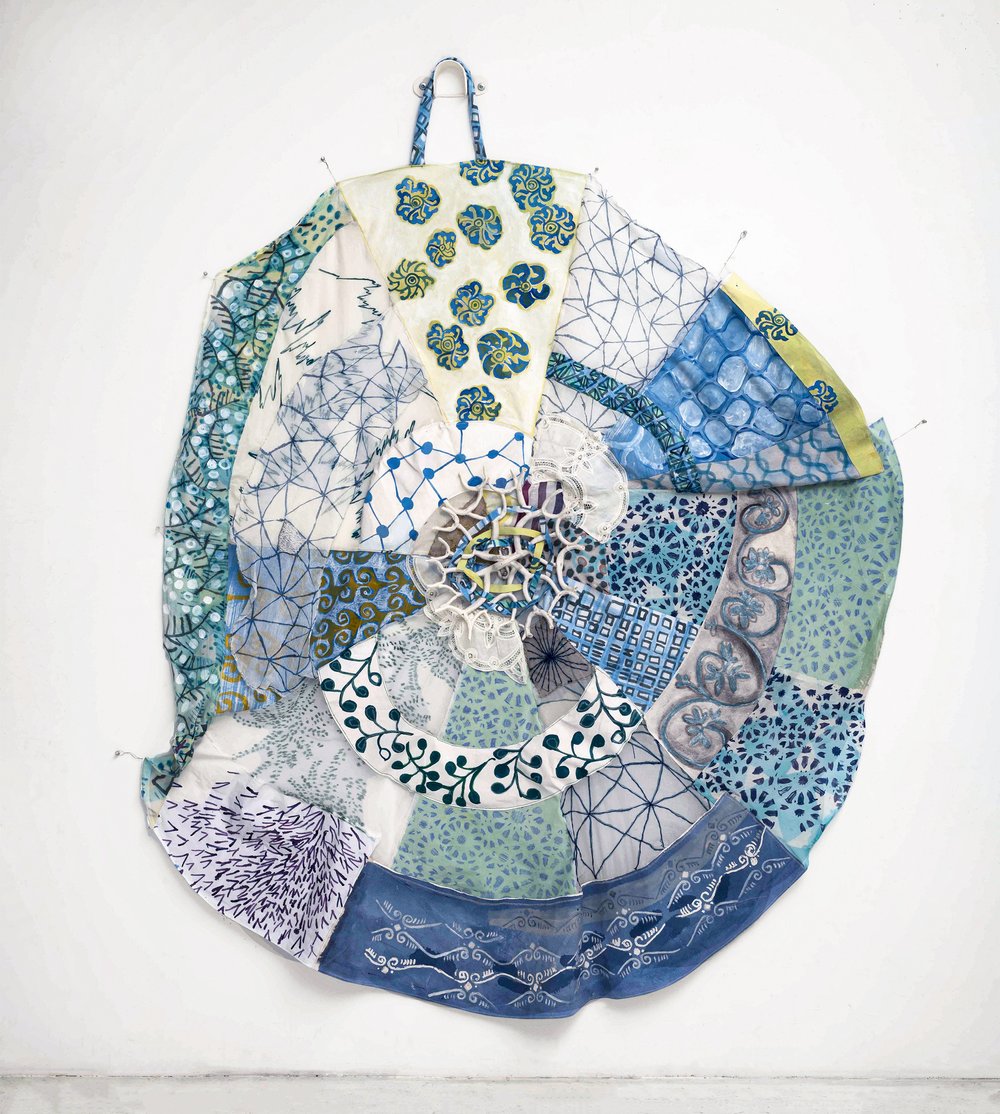 Chronicle features 216 small drawings on paper that Siegel started at the onset of the COVID-19 pandemic. She visualized the discourse around the virus as extensions of her focus on pinwheel and maps, as a shorthand of place, and the aesthetics approaching abstraction. moniz pairs these ephemeral works with Siegel’s painted tapestries that incorporate porcelain as armatures, structural hardware that deciphers colonial appropriation and cultural production.

The exhibition offers multiple entry points into dialogues that magnify how making transforms moments, from staged and beautiful, to essential and abject. Siegel’s works are intimate in scale, reflecting how the pandemic dictated her process and inspired introspective collaging of dreams, news and opportunities, unpacking and reassembling iconography that influences how we interpret and shape our worlds.

In her consideration of patterns and pinwheels, Siegel draws out form, emphasizing how we record our relationship to each other and the landscape, and how intricately and intimately connected we are. Siegel’s pinwheels represent for moniz a fulcrum of visual language that expands and focuses our attention on both specificity and plurality of experiences that benefit from collective empathy. Chronicle explores moniz and Siegel’s shared commitment to the depth and complexity of cultural associations foundational to place, and meaning making through art practice.

sweater. She elongates patterns, turning well-known imagery inside out where unconventional, found and sometimes simple materials like denim and string reimagine familiar shapes in unique compositions.

Chronicle is experienced as a noun, and a verb signifying the intersections of visual language and storytelling. moniz’s focal point centers on Siegel’s balance of imagery and materials that are historically narrative devices. Together they offer a collection of self-referential, dimensional paintings that depict a landscape of resonant ideas, feelings and vistas.

Wilding Cran Gallery is pleased to present In the Shadow, an exhibition of new works by Portland-based artist Elizabeth Malaska.

Through her creative process, Elizabeth Malaska explores the metaphysical universe of the soul in an effort to puncture and uncover Western patriarchal perspectives of identity. The works featured throughout In the Shadow serve to illuminate systems of kinship and empathy between humans, plants, animals, and manmade objects. Whether rendering reflections of moonlight on water, a patchwork blanket, a discarded shoe, a solitary swan, or a mirror with no reflection, the series of four oil paintings flit between portraiture and still-life, figuration and surrealism, to allegorically unravel notions of subjective embodiment, animism, and the shadow self.

Across her body of work, Malaska pulls influence from traditional painting, mythology, nature, literature, internet screenshots, and images from modern advertising. The subjects, themes, and stories explored throughout her work are the byproduct of what the artist describes as a “homeless consciousness.” It is this nomadic sense of identity that allows Malaska to absorb and ruminate upon the ways in which our emotions, relationships, and surroundings imprint upon us, weaving threads of connection between humanity, spirituality, society, and the natural realm.

As human beings in the contemporary Western world, we have come to view ourselves in the context of a hierarchy of sentient beings. Through a personal connection to animist spiritualities, Elizabeth Malaska harnesses her aesthetic to pose questions regarding the consciousness and wisdom of animals. While a myriad of non-human subjects figure prominently across the artist’s oeuvre, Delivered (Among the Meadow Grass) depicts a simultaneously head-on and aerial view of a woman born from a cow. In contrast to her human subject, curled into the fetal position, Malaska’s cow looks directly at the viewer, elevated and centered within the canvas environment. The experimental use of zero-point perspective dislocates the viewer from the surreal nature of the scene, allowing the strikingly blue umbilical cord to serve as a metaphorical prayer of synergy, nourishment, and gratitude.

In an effort to heal and connect with a richer perception of personal empowerment and vulnerability, the exhibition of In the Shadow draws core inspiration from shadow work: a methodology which aims to uncover that which is repressed as an effect of trauma, pain, and suffering. Within Captive, a nude female figure stands within the liminal space between a wire frame bed and a wooden dresser, upon which rests an exquisitely painted conch shell. A shroud of hair covers her face, as shadows project onto a backdrop of pink curtains. A postcard facsimile of a medieval tapestry -- depicting The Unicorn in Captivity -- peeks from the corner of a mirror, reflecting nothing but a void.

While encountering Malaska’s pieces, the viewer is left to ruminate on the implications of human subjectivity in the modern world; it can be a source of empowerment and it can also be a source of profound loneliness. Through an exploration of the spiritual essence of animals, plants, and manmade objects, In the Shadow opens a portal into our immense capacity for empathy, reverie, and connection. In moments of isolation, terror, discomfort, or grief, Malaska’s paintings remind us that in the scheme of the natural world, our lives are intertwined and that, even in solitude, we are never alone. In fact, our teachers are all around us.
Tweet
Share