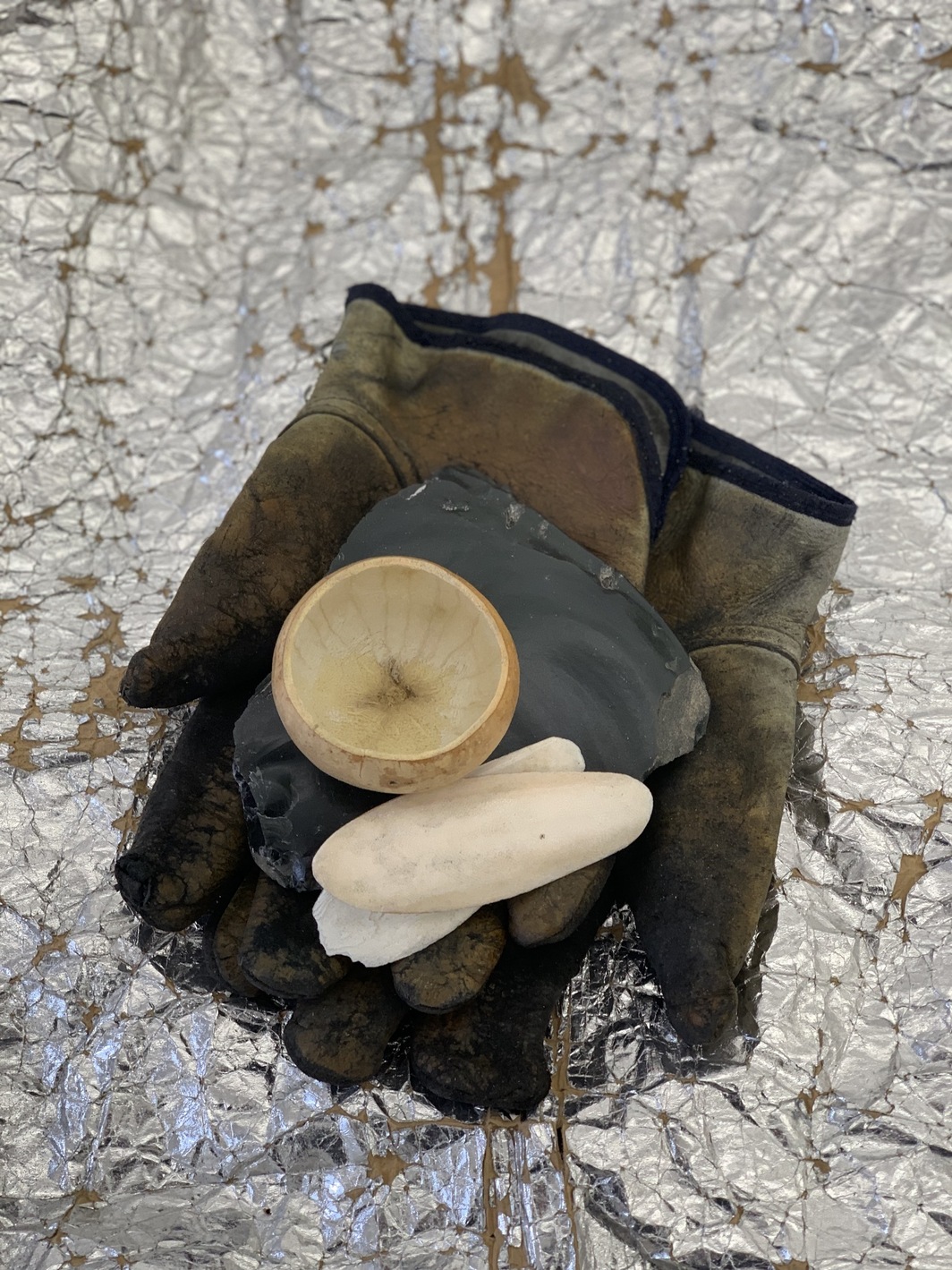 Carrie Yamaoka: Objects in mirror are closer than they appear | Harold Mendez: A sentence, or a spell

For almost three decades, Yamaoka has worked with reflective materials like polyester film and resin, creating works of an inherently provisional nature, steering clear of the pictorial. The artist’s experimental process-driven works, spanning painting, photography, and sculpture, result from a series of layerings and interventions. She often disrupts the surface of reflective polyester film, abrading it against everyday materials or surfaces such as bubble wrap or the studio walls and floor. Once mounted over panel, she pours resin over the film, preserving captured patterns and noise on its surface.

The works’ manipulated mirror-like surfaces impel the viewer to assume an active role in the resulting fugitive image while also remaining subject to the surface’s optical mediations. Objective documentation of works proves futile, the self-timed camera on a tripod or the artist’s own body always present in the photograph as a ghostly record of a particular fleeting moment, in time, space, light, and life, one among infinite permutations of being. The translucent viscosity of the works intimates a nascent quality, always in a state of becoming, refusing fixed pictorial or narrative resolution. Vinyl retains the residue of the artist’s fingerprints, and forms a resist to the resin, progressing in barely perceptible increments after the work finishes its engagement with the artist’s hand. Plastic initially resists the application of plastic, then accepts it, settling into rivulets as if in a perpetual state of wetness. The unintended consequence of the lifting off of paint from the verso of polyester film onto its face, forms delicate lines impossible to have been drawn by hand. Yamaoka attempts to capture in her work the liminal moment in the darkroom, when the image begins to emerge on the print, representational, abstract, and in between, all at the same time.

For Yamaoka, the studio operates akin to a laboratory, always subject to the surprises of error, defect, and chance. A rigorous self-editor, she returns to her previous works with a critical eye—the exhibition features a number of objects which Yamaoka has revisited and reworked. Densities of material accrue or are stripped away to create a newly transformed object whose surface embodies evidence of its understory. Ripping apart material from its previously affixed substrate, Yamaoka wrestles with and reconfigures her own histories, deconstructing and reconstituting them.

Author and viewer, subject and object confuse and reorient themselves. Within the site-responsive encounter, the viewer (re)makes the work, underscoring how we make our own pictures out of what we see—and understand ourselves and the world—through our manifold subjectivities and interactions.

Commonwealth and Council presents A sentence, or a spell by Harold Mendez, the artist’s first solo exhibition with the space. With new sculptural works, drawings, and assemblage, Mendez continues his meditations on transnational narratives that shaped the histories of the Americas and the bodies touched—through migration, exchange, violence, and evolving spiritual, epistemological inquiries—by those inherited histories.

An arrangement of votive offerings in the center of the floor anchors the gallery space. Vessels with prominent bone-like appendages; a jutting stand enshrouded in fabric; shells with serrated spikes clasped together. Upon closer look, the component parts of the objects may reveal themselves as tails of horseshoe crabs, calf-weaning nose rings, funerary headrests. With their atemporal, enigmatic, and elegiac quality, the objects perhaps suggest burial objects from a familiar, yet undefined, culture. Marking death through oblique allusions to the body, Mendez constructs a scenography of communion, evoking notions of life and death, presence and absence, and fullness and emptiness, across time and geography.

The aforementioned objects are cast in brass and iron, with varying patinas. Through these processes of reproduction, Mendez is not so concerned with the loss of any original aura but rather in what meanings carry over. The artist searches and seeks what memories remain as vestiges. And what new meanings material alchemy can produce. The weave of a fabric rendered in metal turns an obfuscating shroud into sinewy skin. Arepas, ubiquitous carriers for food in Colombia, enveloped in silverleaf become pockmarked iridescent moons.

Mendez’s uncanny play with materials create multivalent objects and images redolent of more than their prescribed function or meaning. Found objects take on new connotations. Layered crowns of fabric and leather read as ritualistic totems, nodding to pre-Columbian artifacts. They were originally polishing wheels for metalwork, and the residues from their original purpose remain in imperceptible form (and are acknowledged in the materials list). For Mendez, all such myriad meanings and memories, lived and imagined, intrinsic and extrinsic, associated with the objects remain pertinent. The artist asserts that objects and images hold agency, their own subjectivity that speak to their histories and encounters, whether visible or invisible, including the artist’s interventions. A glinting silver-leafed spiderweb, painstakingly realized, indexes the labor of the artist’s own body.

In offering works with polysemic resonance, Mendez captures moments of slippage in semiotic recognition. Thus the artist repudiates singular identities, totalizing universality, and linear narratives. While histories of colonialism and the concomitant development of capitalism that drove diasporic migration have informed Mendez’s life and worldview, and thus his work, as a Latin American, Mendez is not interested so much in these particular narratives but more on how these histories have left traces on our bodies, psyche, and the images and objects with which we live. Affect supersedes cause and effect.

One specific inquiry that informed Mendez’s work in the exhibition was his search for the grave of the late Cuban artist Belkis Ayon. While Mendez in the end did not find the grave, it was not a failure as the undertaking was never about achieving a neat resolution. The circuitous travails around and the tangential ruminations about—the precarity of bodies, and bonds shaped by and memories preserved through shared rituals—were just as, if not more, compelling and resonant in the works that followed the trip to Cuba. Through his wayward explorations across histories and materialities, Mendez posits that at times our collective imagination can reveal greater truths.