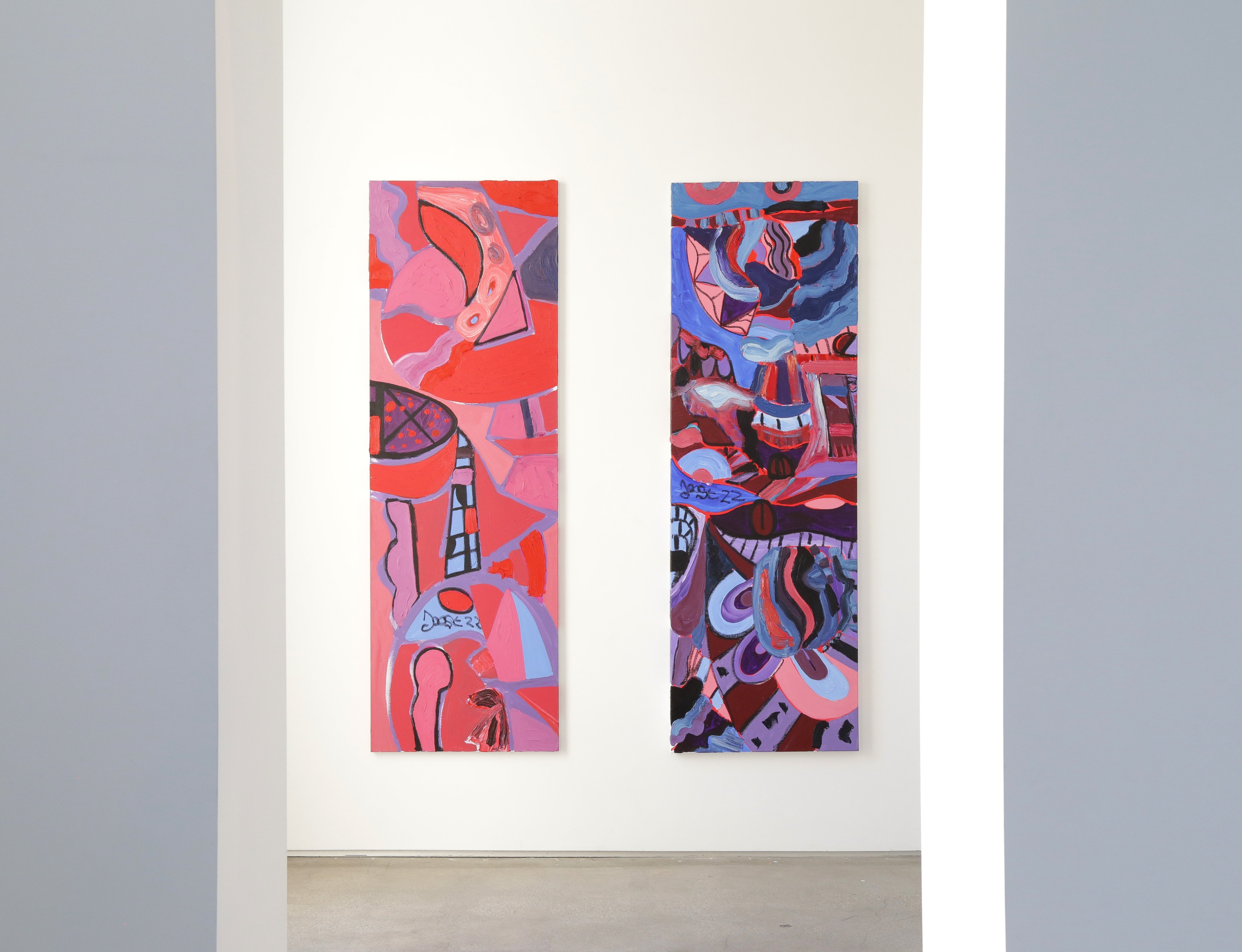 Tufenkian Fine Arts ✨
216 S. Louise St, Glendale, CA 91205
Jan 21, 3 PM - 6 PM — ends Feb 18, 2023
Tufenkian Fine Arts is pleased to present, Orpheus et al, an exhibition of paintings by Utrecht-based artist Joost de Jonge curated by Peter Frank. This will be the artist’s first solo show with the gallery. The exhibition will be on view from January 19th through February 18th, 2023, with an opening reception to be held at the gallery on Saturday, January 21st from 3:00 pm to 6:00 pm.

Born in the Netherlands and currently based there, Joost de Jonge evinces the assertive drama of his country’s participation in Modernism. This neo-Modernist combines the unleashed energy, the undulating line and agitated texture, of Dutch abstract expressionism -- in particular but not limited to CoBrA’s buoyant, muscular primitivism -- with the stark, color-driven compositional reasoning of De Stijl and other geometric tendencies.

But we should not regard de Jonge simply as a perfectly Dutch distillation, a painterly version of genever; he took his education and has cultivated his profile throughout Europe, studying, showing, and finding patronage in Spain, Italy, Austria, Switzerland, Croatia, and elsewhere. This exhibition re-introduces de Jonge to the American audience he began attracting at the beginning of the century.

European artists struggle with the weight of history, actual and mythic, to an extent almost unimaginable to Americans. Rather than fend off that history and that mythology, de Jonge embraces them, practicing a kind of spiritual and intellectual neo-classicism even as his art manifests a much rawer impulse.

Behind the work seen here, for instance, is the legend, part ancient religion and part modern poetry – and psychology – of Orpheus, the hapless demi-god who twice loses his beloved Eurydice. Notably, Orpheus first woos, then later tries to free, the object of his ardor with the music he produces on his harp – a music that can vanquish obstacles but not fate. Music is a preoccupation of de Jonge’s, who has long regarded his – and effectively all -- abstraction as responding to musical principles and experiences. Carrying this regard to theoretical levels, de Jonge recognizes and even elucidates parallels between visual art and music – a discourse that continues and “modernizes” the ancient Greek rhetorical form of ekphrasis. Working with poets, essayists, musicians, and fellow artists around the world, de Jonge has established a loose ekphrastic network, one you might say provides a practical as well as theoretical approach to the pan-artistic Gesamtkunstwerk. In the meantime, however, the Dutch painter pursues his expression – his godly narratives and ungodly images – in the privacy of his studio.

Tufenkian Fine Arts is pleased to announce, Color and Form, a group exhibition featuring artworks by Richard Bruland, Fatemeh Burnes, Tanner Goldbeck, Diane Holland, Moko Khachatryan, Astrid Preston, Alain Rogier, Ann Marie Rousseau, Ann Thornycroft, and Laurie Yehia. The exhibition will be on view from January 19th through February 18th, 2023, with an opening reception to be held at the gallery on Saturday, January 21st from 3:00 pm to 6:00 pm.

Color and Form brings together a group of artists whose practices privilege the formal qualities of art-making when creating their distinct visual languages. The complex relationship between color and form offers the organizing principle for this exhibition, with artists grappling with the complexities of personal and communal identity through experimentations in tone, movement, texture, and geometry.

Richard Bruland’s abstract paintings explore the complex relationships between color and texture. Bruland approaches painting spontaneously and intuitively, accumulating and removing layers of paint that are manipulated using a reductive approach. The artist places emphasis on form, allowing the successive layers of acrylic paint to create a marbled effect, which is later sanded down to produce gradual transformations in tone across the surface of the canvas.

Fatemeh Burnes’ work references events, tragedies, and cultural chasms with autobiographical elements examining her childhood in Iran, her father’s imprisonment (under both Shah and Ayatollah), her adolescence as a child bride, and her life as an immigrant. She develops her compositions by extracting, articulating, secreting and exposing new identities. The artist’s spontaneous stains and drips allow patterns to develop and spread across the canvas, weaving together fragments of personal history, emotion, and imagination.

Tanner Goldbeck paintings traverse the artist’s interests in tearing down and repurposing his own existing art by dismantling images and abstracting them into new organic constructions. Goldbeck’s interest in line art is the fundamental structure which binds his practice, with each paintings reflecting a playful tension between control and chaos. In his works, linear elements define space and inherently contain volume while color and textures fight to break down boundaries and add emotion.

Diane Holland’s studio practice involves advanced forms of drawing and collage as well as photographic printing to interpret the relationship that develops between human beings and the media artifacts they create. Her works translate personal experience into imagery that is at once digital and painterly. The source material for her electrostatic and photographic composite alike is drawn from real and imagined experience and engage a collage aesthetic appropriate to the multivalent sensory possibilities of our time.

Moko Khachatryan roots abstract art in the unconscious, unworldly, and spiritual realms. The artist asserts that “abstract art is not drawing or painting, it is a mentality, a lifestyle, and it is a thought process that is deep and philosophical.” Khachatryan's canvases have a meditative, confident, and strong quality, as bright and dark paint expands and drapes along the canvas with a sense of verticality. Her placement of color on the canvas speaks to her visionary dexterousness.

Astrid Preston approaches painting as a synthesis between representation and abstraction, with nature and landscape acting as the artist’s source of inspiration. For Preston, this fusion is sufficient to carry the full freight of emotion and spirituality. It also allows the artist to explore a wide gamut of painterly possibilities: the coexistence of flat space with texture and pixilation; using line, geometry and the effect of a superimposed grid; the repetition and variation of motifs; and the psychological and perceptual effects of color.

Alain Rogier works primarily in fields of painting and collage, creating large scale expressive paintings characterized by dynamic composition and distinct brushstrokes that confront the canvas and demand the viewers’ attention. In the wake of World War II – and in particular the Holocaust, which Rogier’s parents endured – an ethos of doubt and determination, despair and fortitude suffused throughout Western artistic expression; and it is that ethos that Rogier recapitulates with furious eloquence.

Ann Marie Rousseau employs drawing, painting and collage in her ongoing interest in the subject of line. Lines, both seen and unseen, are found everywhere in nature, including in the wind, in the trunks of trees, in the sounds of music, in the light of the sky, and in the waves of water. It is in their shaping and shading, their tonal gradations, thinness or thickness, that her work portrays both a visual rendition of energetic processes of perception, and a display of the inner workings of the conscious and unconscious mind.

Ann Thornycroft’s abstract works embrace a dialogue between formal abstraction and the imagery as extracted from observations of nature. Thornycroft is fascinated by the tension between spontaneous and organic elements, as well as geometric ones. In her works, the contrasting rigidity of the grid and the fluidity of the arcs are enhanced by sweeping washes of transparent paint that inspires meditation.