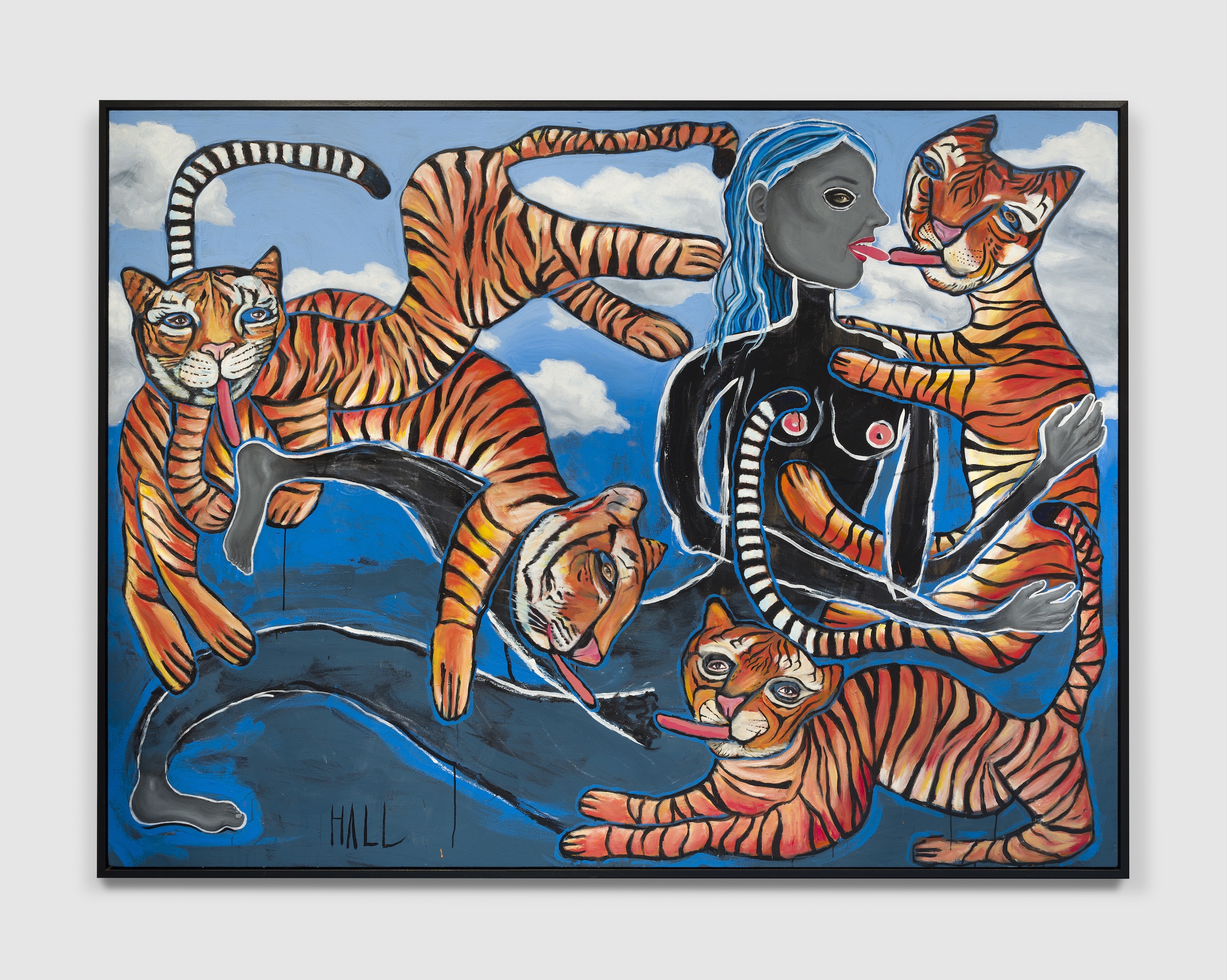 Somewhere a Modernist sits in his studio with his big brushes (so big, the brushes are) wondering how to activate the background, no—make it come forward, perhaps. Or do something, anything, other than just sit there. Can I make the background…dance? Ugh, what a girly way to paint. No, he thinks, I have skill! Or uh… the right kind of non-skill, anyway. And I have my colors! And my godlessness! The words of Hans Hoffman’s infamous painterly proposition, push and pull, pound his mind like a coxswain’s command… heave!… ho!… push!… pull!…

Somewhere on a coffee table is a copy of Rosalind Krauss’s L’Amour Fou gummed shut in desuetude (so weird that book pages get sticky from neglect—I do the opposite). The book wants you to know what, exactly, the triumph of surrealist photography is. If you’re weird enough, the reality-residue of the photograph points to a reality that is itself a sign of something…elsewhere… or nowhere.

Trulee Hall gathers all of these—the myopic histories of her individual mediums, the funny camp quality of craft coupled with desire, pop spirituality, sex, “inappropriateness”—and creates a world where there is no embarrassment in pleasure, no middlebrow finger-wagging, just the push and pull of the picture giving way to other acts: plucking, sucking, gyrating, licking… there doesn’t have to be so many fences between painting and film and sculpture. We can make them all inform one another. We have the technology. Trulee’s work often starts with a painting that then acts as a storyboard for a film. Parts of the films give way to animations, CGI and stop-motion, before coming back to live-action, often with singing and dancing, always with a musical score composed by the artist. Props from the films lead double-lives as sculptures. Actors lead double lives as characters. A set of giant boobs leads a double life as disco balls. She has her colors. She has goddesses. She makes the background dance.

This show purposefully mines the gold of new-age clichés, twisting them to funnier and juicier effect. A suite of paintings plays with the forced fantasy relationships we bestow upon animals, the unspeakable subtexts coming out to sun themselves. My favorite is the mermaid on the couch whose fishtail doesn’t even cover her pasty human ass. It’s like being mooned by mother nature.

In the next room, an ensemble of tiger paintings depict the sexy beast in equivocal positions with sexy blue-hued women. Each is accompanied by a video. The image of the painting is recreated with live actors. The actors are painted to matchthe hyperreal colors of the painting. Costume rubber-tongues and paper-mache tiger heads and the incredible, particular bodies of her collaborators bring the images to something more saturated than life. A sliver of white background becomes a white-painted dancer literally pushing and pulling herself to the foreground of the film. Trulee still wrestles with many of the painterly problems of Modernism—but she won’t limit herself to solving them within the painting. Hans Hoffman is rolling in his grave. I hope it’s fun.

Foreplay is what happens before the picture arrives. Those who know, know that arrival is never as satisfying as arriving. In the movies, foreplay is what we might call pre-production. There’s a whole flurry of stuff that happens to get you the nice flat flickering flick on the screen. In painting, it might be the dreaming before the image comes. That’s the elsewhere we’ll never see, but oh, what a feast the rest is!