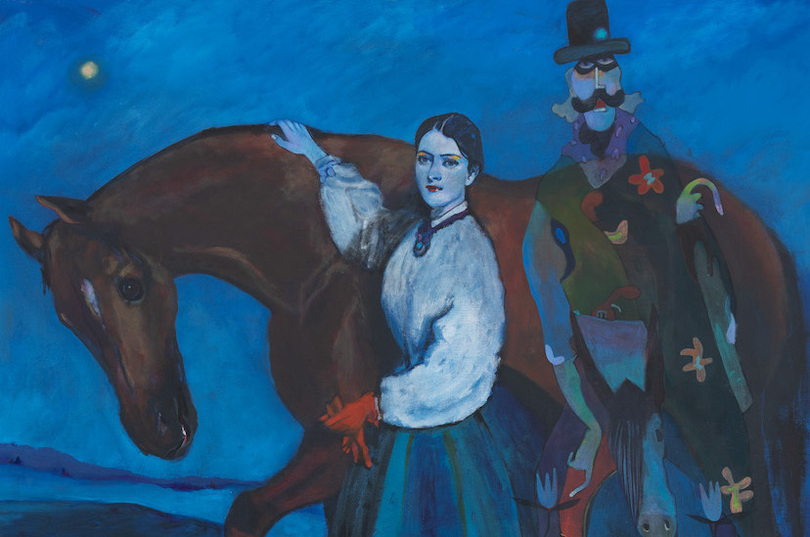 If his previous exhibition The Flirt was a comment on restraint (with color and scale in particular), Tambourine channels an opposing impulse. Debuting the artist’s largest compositions to date this exhibition unleashes Dionysian debauchery. Tambourines have been used as instruments dating to the ancient world, in religious music, and rock n’ roll, an allusion which furthers Petker’s collapsing of histories.

With these tableaus, Petker invites viewers to join the band of revelers as they promenade through hazy timelines. In these scenes of social merriment one can overhear clinking glasses, sweet serenades, and rowdy limericks. Fair maidens, musicians, chumps, drunks, and libertines are newly accompanied by a number of animals, including horses and geese.

Petker’s initial interest in art history and classical portraiture was born during a trip to Florence Italy in his 20s. At the time he was a writer and aspiring musician—looking for something he found the renaissance masters. His current works meld a continued reverence for colossal frescos and art historical painters while embracing a carefree attitude toward “covering things up.”

With a punk disregard tempered by conceptual control, Petker’s ribs formal painting conventions. In one composition he casually covers up a beautifully painted rug with hurried cartoon flowers, while in another picture he smooshes the figures all onto the same half of the canvas. His colors too break from previous self-imposed conventions primarily exploring the realm of monochrome; here the palette is playful and unrestrained, teetering on psychedelic.

Transparency continues to be both a subject and formal strategy. His flat ghostly figures, phantoms unrestrained by human anatomy, these characters with distorted features, fantastical and mask-like— haunt their art historical companions—round and atmospheric counterpoints—as they fade and recede. Petker also sands down the surfaces bringing a softness to the scenes. Together with these latest works plunge viewers further into Petker’s dreamworld—a place colored by the finality of history and the haziness of memory.