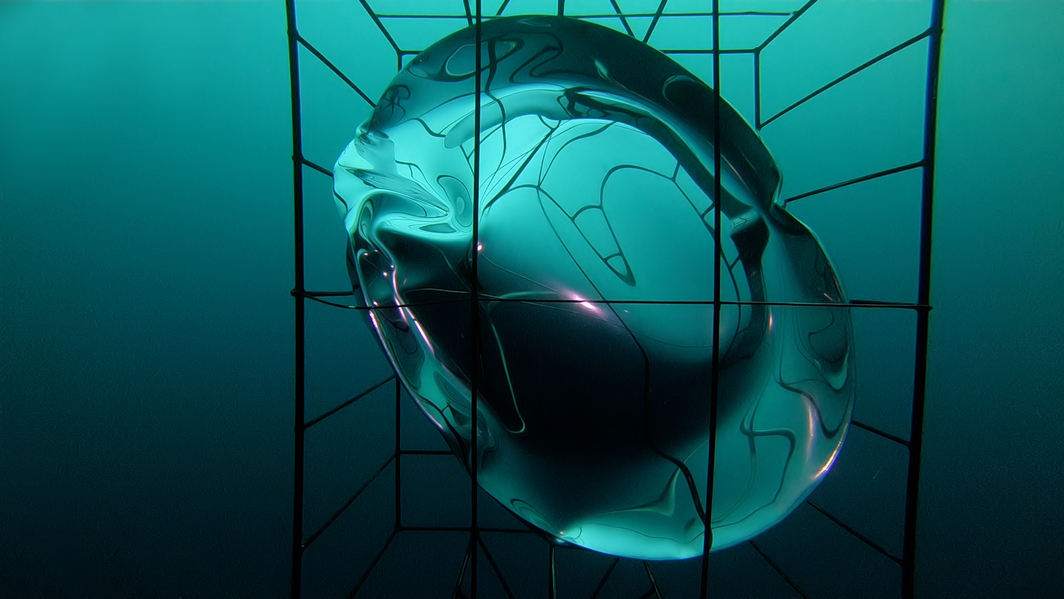 Adam Tylicki launched the preparatory work for what would eventually become 20 Atmospheres in 2018. Did it take him five years to finish the composite artwork that is the final piece on display at the gallery? It is more accurate to describe 20 Atmospheres’ total duration as 4 years, 3 months, and 11 days. It is, as such, less an instance of either a sculptural practice or land art (both of which it nevertheless manifestly and unambiguously is) than a performance piece whose progression is borne within the very formal plastic parameters of the resultant work proper.

The course of actions that lead to the creation of 20 Atmospheres commenced with the manufacture of seven polished stainless steel sculptural pieces whose faultlessly even surfaces, metallic sheen, and cleanly symmetrical geometrical shapes are distinctly reminiscent of Minimalism’s erstwhile “specific objects”. Tylicki began the process by building a custom English Wheel metalworking tool to allow for the creation of precise curvature conceived for the sculptures. The artist then proceeded to fabricate his own stainless-steel panels that were consequently precision-welded using tungsten inert gas (TIG) welding equipment to ensure the complete air-tightness and impermeability of the final pieces. Tylicki later minutely grounded away the consequent welds, rewelded the shapes, then re-grounded them again, over and over, until perfectly sharp and smooth edges without the slightest possibility of porosity were achieved. The sculptures were finished with several stages of polishing, providing for an unblemished mirror-like reflective surface veneer.

Once the pieces were manufactured, Tylicki encased them in the specially designed and constructed (as with everything else, by the artist’s own efforts) metal cages and took them offshore near the coast of Faro, Portugal. There, equipping the cages with waterproof and highly shock-resistant camera rigs has allowed Tylicki to capture the phantasmagorical-seeming action of the underwater gravitational force—that’s the titular 20 Atmospheres, denoting the number of units of sea level pressure (approximately 292 pounds per square inch of surface) at the depth of roughly 660 feet—and the violence of its blunt potency’s indifferent bashing of the steel sculptures’ perfectly polished surfaces. In the resultant footage, the underwater gravitational force makes an abrupt, as if cannily timed for a jump scare, appearance, with a jagged cadence of a Monster horror movie sequence.

Nature’s indifference to the vanity of human perfection is what the work enacts, and re-enacts over, and over, and over not only in the looping video projection on view but, more importantly, in the mangled shapes of the steel figures on display in the adjoining gallery—as in the organic daily flow of the two living forces’ forever un-dialogic co-existence—through the “operation” of their final plastic form.

What Tylicki places on show is the natural world’s placidly apathetic existence outside the living beings who imagine themselves to be at its center, beyond the contingent capacities of man’s observation, or even the reach of his imagination. The ontological puzzle of paradoxical [im]possibility of thinking such a state is referred to in, and around, the philosophy of Speculative Realism variously as “correlationism”, “being in the world”, “active-vs.-passive nihilism”, or all the way back with Kant, the “antinomies of reason”—while the act of accessing it is what the philosopher Eugene Thacker has once pinpointed as the quintessential feature of Horror as an artistic device. Thacker distinguishes between the notions of the World, the Earth, and the Planet. The World is our daily sphere of existing and interacting with each other, the objects of our use and surrounding, and our material environment. The Earth is what comes to our attention when the temperature records become averages and the erstwhile highs become a rare respite; when the Fire Season becomes an ambient State of Preparedness; or when volcano eruptions ground planes and disrupt plans. The Planet, then, is all that exists outside of the two spheres abutting the human existence or thought, the beside and beyond so profoundly unconcerned with notions of vitality in any form as to be indifferent to its complete cessation. We often speak of the effects of Climate Change and environmental degradation in terms of destruction and violence, humanity “destroying the Planet”, but the truth is that what is being destroyed are the narrowly advantageous conditions of habitability specifically salutary to human thriving. The Planet has existed for billions of years before us, before any life as we define it, and may continue existing for millennia after—that is the quintessential terror that is enacted in 20 Atmospheres. The wild world worlds, as it will.

The aesthetic parameters of Tylicki’s Atmospheres. sculptures amplify the conceptual import of 20 Their most readily available stylistic affinities are Robert Morris and Donald Judd, the icons of High Minimalism. It isn’t coincidental that that most phenomenologically oriented of artistic par adigms should work as a foil to Tylicki’s deconstruction of the narcissistic solipsism of human industriousness. Requiring a viewer’s presence and personal affective input to “complete” the piece, Minimalism’s clean shapes once elevated the audience’s com placency to a gratifying status of an irreplaceably integral part of the work itself. By allowing the unblemished doubles of its reflective steel angles to be left mangled into bashed asymmetricity by planetary forces, Tylicki dismantles these comforting notions of anthropocentricity. What may be seen as a mute and fully concluded sculptural object reroutes its viewers’ understanding away from the egotistical readings of pure emotional affect toward an understanding of the complete piece as an unceasing pe rformance.