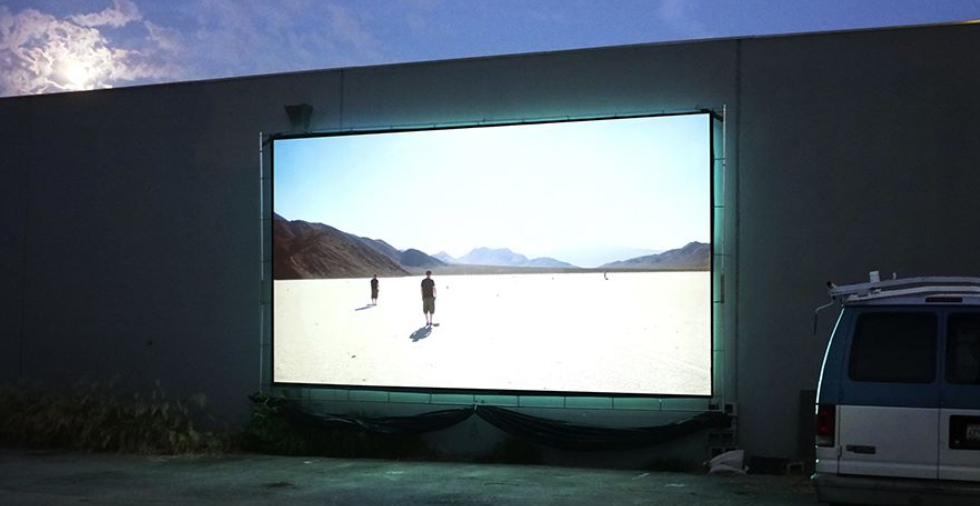 FLAX’s Drive-In Theater returns to Tin Flats for a new season of double features on the last Monday of the month from April to October.
We’ve invited six artists and selected one of their films. Each artist then selects an additional film of his/her choice — a feature, a documentary, another artist’s video — echoing his/her work. Each month offers a new game of refraction and reflection through multiple lenses–from the artists’ screens to the cars’ windshields. The screenings will include an informal discussion with the artists who are locally based or in residency.
Each screening has eight spots available for cars, which must be reserved in advance. No reservation is required for open seating area outside of cars.
Screenings will begin after dark. Please refer back to our website for updates on times as the days get longer.

Monday, May 20
Arnaud Dezoteux, Dark Meta Reeves, 2016 (29 min) and Damon Packard, Foxfur, 2012 (61 min)
In presence of Arnaud Dezoteux, with the support of the French Cultural Services.
Suitable for all audiences

Monday, June 24
Mona Varichon, No I was thinking of life, 2018 (12 min) and other film to be announced
In presence of the artist

Monday, July 29
Anna Wittenberg, Skid Plate, 2018 and other film to be announced.
In presence of the artist

Monday, August 26
In partnership with Gas
Performance by Sonja Gerdes and screening to be announced.

Monday, October 28
Maura Brewer, The Surface of Mars, (12min) and other film to be announced.
In presence of the artist